Tankers’ move to Ramstein Air Base delayed by two years 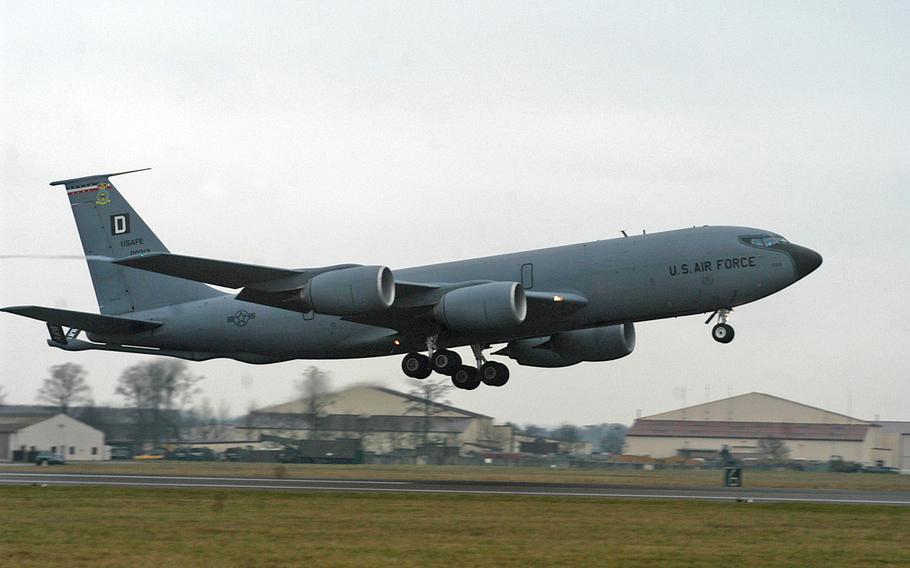 A KC-135 Stratotanker from the 100th Air Refueling Wing takes off from RAF Mildenhall, England. The move of K-135 tankers from England to Ramstein Air Base, Germany, has been delayed, according to local news reports. (Stars and Stripes)

KAISERSLAUTERN, Germany — The relocation of U.S. tanker capabilities from the United Kingdom to Germany will be delayed by two years, as U.S. and German officials continue to work through the details of the pending move, Air Force officials in Europe said this week.

The 100th Refueling Wing at Royal Air Force Mildenhall is still scheduled to transfer to Ramstein Air Base, said Master Sgt. Alex Griffin, a spokesman for U.S. Air Forces in Europe-Air Forces Africa. But the process of moving personnel and assets from RAF Mildenhall to bases in Germany has been delayed by 24 months because of discussions between the United States and Germany pertaining to “program management, procedures and responsibilities,” Griffin said in a statement Wednesday.

The Rheinpfalz, a regional German newspaper, first reported that the move of the air-to-air refueling mission to Germany would be delayed. The 15 KC-135 Stratotankers and some 700 personnel from Mildenhall aren’t expected to arrive at Ramstein until 2024, the paper said Monday, quoting U.S. military officials.

Griffin said the estimated return dates of Mildenhall, along with RAFs Alconbury and Molesworth, to England have been delayed to approximately 2024.

The plan to shut down 15 military sites and consolidate installations in Britain and Germany, part of a sweeping reorganization of U.S. forces in Europe, was announced in 2015. The cuts are expected to save the Pentagon about $500 million annually.

But top military officials in Europe said as recently as April that some of those closures called for by European Infrastructure Consolidation were under review.

Griffin said Wednesday that “all previous decisions” for the EIC “that were announced in 2015 are continuing as planned.”

Germany is also slated to gain a special operations mission. The 352nd Special Operations Wing at Mildenhall, which includes CV-22 Ospreys, MC-130J aircraft and more than 1,000 personnel, is scheduled to relocate to Spangdahlem Air Base. Griffin said the delay also applies to this unit.

Besides Mildenhall, operations at RAF Alconbury and RAF Molesworth are expected to move to RAF Croughton.

To accommodate the tankers, Ramstein — already host to the busiest U.S. military airfield in Europe — will undergo further expansion, including construction of a two-bay hangar and the enlargement of an airfield ramp, Griffin said.