Suze Orman has some thoughts on new blended retirement plan 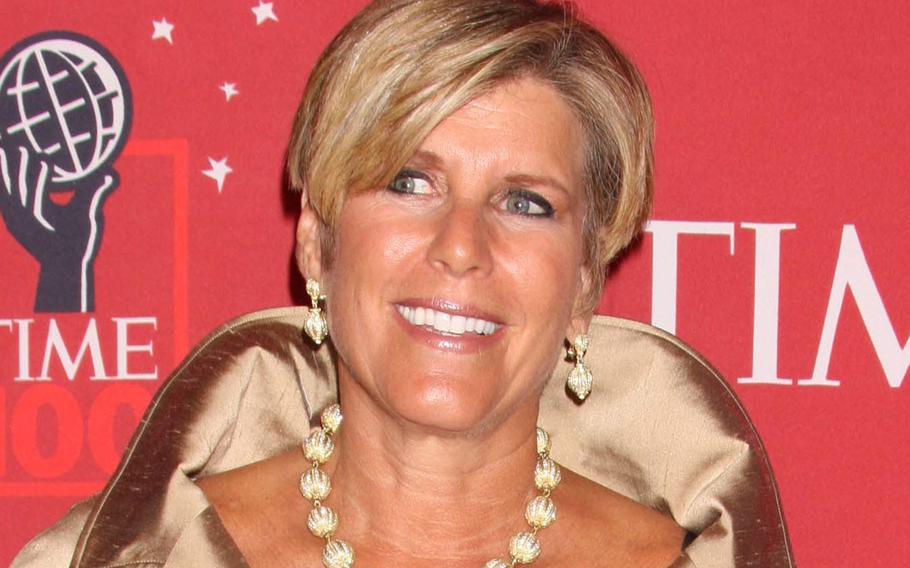 In a May, 2008 file photo, Suze Orman attends Time's 100 Most Influential People in the World Gala at Lincoln Center in New York City. (Robert Pitts/Landov/MCT)

Personal finance expert Suze Orman knows military leaders, pay officials and retirement service offices are getting ready to educate servicemembers on the new Blended Retirement System (BRS). But none of them, she said, can advise individuals whether to opt in, or avoid, the BRS when it becomes available in 2018.

“But I certainly can,” said Orman with the spunk that made her so popular over decades with TV audiences and book buyers hoping to become better investors and wiser consumers of loans, insurance and other financial products.

Part of her familiar mantra is to avoid debt, pay off credit cards, run from payday lenders, buy (don’t lease) vehicles, and buy used not new. For military folks, she like to add, protect your money as aggressively as you do the nation.

We reached Orman at her home in Boca Raton, Fla., for a phone interview, just a few weeks after she visited the Pentagon and agreed to help the Army educate soldiers on the new retirement, by starring in a new instructional video.

But in February, the primary tool to introduce BRS to active and reserve component servicemembers will be a two-hour online course that explains features and compares potential lifetime values with the legacy “High-3” retirement plan. They also will have access to a new online calculator to compare BRS with High-3 using age, years expected to serve, planned contributions to Thrift Savings Plan (TSP) with government matching (a key feature of BRS), historic rates of return on TSP investment options, personal tolerance for investment risk and more.

Those given the choice, about 70 percent of the total force, will have all of 2018 to decide. But to switch they must complete the course, said Col. Steve Hanson, a branch chief in the Army’s compensation directorate and officer in charge of implementing BRS for soldiers. After the course, members with more questions can get individual help, by phone or in person, with financial counselors and others trained on the new plan.

Its key features are portability, enhanced TSP, a lump-sum continuation payment at mid-career and an immediate but reduced annuity — 20 percent less than the High-3 plan — payable after 20 or more years of service.

With characteristic candor, Orman said the military is moving to BRS for the same reason most companies have trimmed or replaced their defined pension plans with employer contributions to portable 401(k) plans: It saves them money.

The big flaw of High-3 is cliff vesting; no one gets a retirement benefit if they don’t serve at least 20. That affects more than 80 percent of enlisted members and half of all officers. About 45 percent of the current force, however, have opened TSP accounts but with no government matching of their contributions.

With BRS, if you serve two years, you can walk with a TSP enriched by government matching. To make the plan more attractive for careers, it offers a one-time continuation payment by at least the 12-year mark to members who agree to serve four more. Congress recently voted to allow the payment as early as the eighth year. The services are still deciding how that new flexibility will be used.

Members who joined the military before 2006 will remain under High-3. Those who join this year will only be under the BRS. So choice of plan falls only on those who entered between those years.

“If you’re smart and you let me teach you, I can show you how you can have more money [with BRS] than if you stayed with the simple legacy system,” Orman said she will advise younger and career-minded servicemembers.

The keys to matching or surpassing the value of the High-3 plan, she said, is to be both young and committed. They also must:

• Contribute a full 5 percent of basic pay to TSP to maximize government matching.

• Use only the Roth IRA option inside TSP so contributions are taxed in the year made but will be withdrawn tax free after age 59 ½.

• Invest only in stock index funds that provide the highest return over time.

• Don’t get spooked when markets correct and decide to move into more conservative funds. Investors in their 20s and 30s should “hope the market goes down, down, down,” Orman said. “Because the more it goes down, the more shares you buy” each month. “I want to educate them not to look at how much they have in dollar value; look at how many shares,” Orman said. As number of shares climb, investors over time will be “happy no matter what happens.”

Choice of plan will be easy for members who don’t want or expect to serve 20 years. Only BRS provides TSP with government matching.

Deciding to stay under High-3 should be almost as easy for members halfway through military careers, Orman said. One reason is they don’t have time to make up for a 20 percent annuity cut using TSP and a continuation payment that at a minimum will equal two and half months’ basic pay for active duty, and a half month’s active-duty basic pay for Guard and Reserve.

Also, Orman said, by mid-career members know service life. Having served eight to 10 years, if they were to shift to BRS and take continuation pay at 12 years, it would obligate them for four more years. At that point they would have just four additional years to reach 20. So they should consider whether at 20 they will regret having passed on the bigger lifetime annuities under High-3.

If they can envision at 12 years being willing “to spend another four years in after that — and probably with ease another four because they’ve been doing it for so long — then I would say stick with your legacy plan.”

Orman and Hanson agreed one positive side effect of a blended retirement plan will be to make military folks more aware of the world of finance and investments, and perhaps more knowledgeable of scams and schemes that routinely target their busy lives and steady paychecks.

Her impression of military audiences, Orman said, “is they are so sweet, the men and the women both, that it breaks my heart that they don’t have a clue about anything when it comes to money.”

It’s no surprise that an investment expert believes service people need more than an online course on choice of retirement. Orman says the next generation, given only the BRS retirement plan, will have to be more disciplined and stay more engaged in their finances.

“In the long run this will be far better than the legacy when you look at their entire financial life,” she said. “But [you] have got to be smarter and financially ready. … If you know the right moves, you will leave service without any battle scars at all, when it comes to your money.”