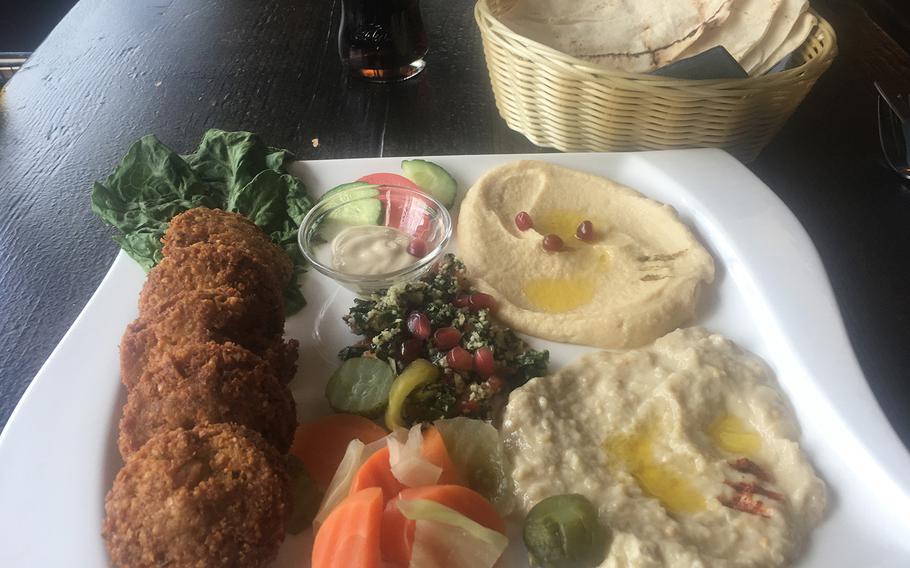 Buy Photo
Falafel and hummus are the main offerings on the menu at Red, a new restaurant in Stuttgart, Germany's north side. (John Vandiver/Stars and Stripes)

For years, it was a cafe. Then it was a pasta bar. Now it’s Red — Enjoy Refugees Best Kitchen.

In January, the restaurant near Killesberg Park in Stuttgart’s north side opened for business with members of the local migrant community helping to staff the kitchen.

The idea behind the eatery, owned by a local restaurateur who is closely involved with the migrant community, is that integration works through work.

For customers, the result on the plate is a tasty twist to the more predictable dining options in the neighborhood.

The menu is simple. There are a range of sandwiches, wrapped in thin flatbread and filled with the flavors of the Levant. There’s the Damascus wrap made of falafel, humus, veggies and herbs. There are others named for Amman and Beirut. And in a gesture to its host city, there’s the Stuttgart sandwich, a vegetarian offering that clearly has nothing to do with more meaty local culinary traditions

On a recent visit, I went for the sampler plate, which included falafel, hummus, a couple of spoonfuls of Middle Eastern-style salads and baba ghanouj — which is basically a dip of pureed eggplant. It was served with a side of flatbread, and it all tasted great.

The atmosphere inside is cozy, and there also is lots of outdoor seating.

So far, the restaurant, which is next door to Stuttgart’s main art college, appears to be doing well, with a steady stream of customers filing through for lunches and dinner.

For daily commuters from Stuttgart’s Robinson Barracks, Red is an easy stop off on the way home from the work day at Patch Barracks. The restaurant is just 100 yards from the turn at Am Kochenhof and Stresemann Strasse, where streams of Americans motor during barracks-to-barracks rush hour jaunts.

At Red, where the mission is integration, outsider Americans might feel at home.

Address: Am Weissenhof 1/1, 70191 Stuttgart, GermanyHours: Noon to 7 p.m. daily, closed TuesdaysDress: CasualPrices: Everything is under $10Information: No website or phone number