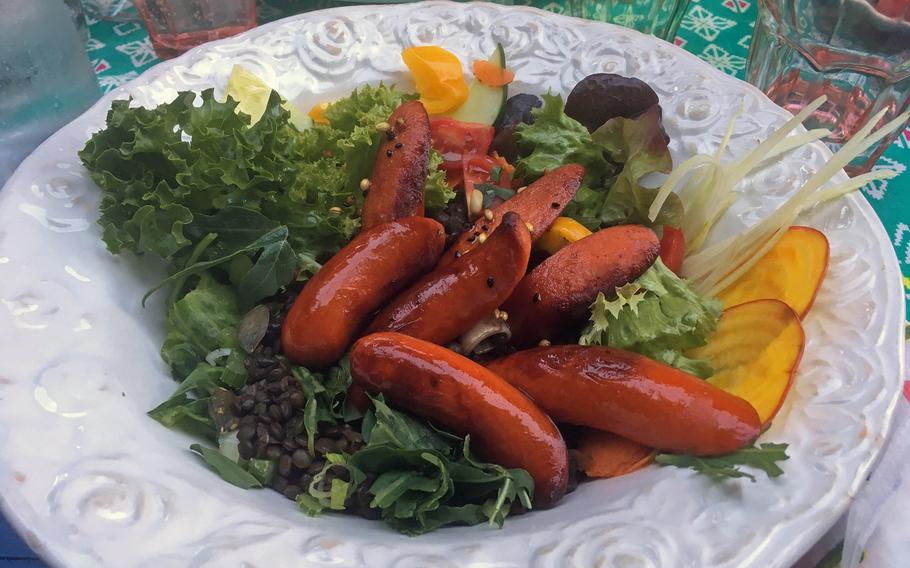 Buy Photo
The menu at Ins Blaue in Stutgart isn't extensive, but the meals are creative. Among the offerings are a stew of lentils and sausages with tasty spices, watermelon salad and chicken served in a peanut sauce. (John Vandiver/Stars and Stripes)

Buy Photo
The menu at Ins Blaue in Stutgart isn't extensive, but the meals are creative. Among the offerings are a stew of lentils and sausages with tasty spices, watermelon salad and chicken served in a peanut sauce. (John Vandiver/Stars and Stripes) 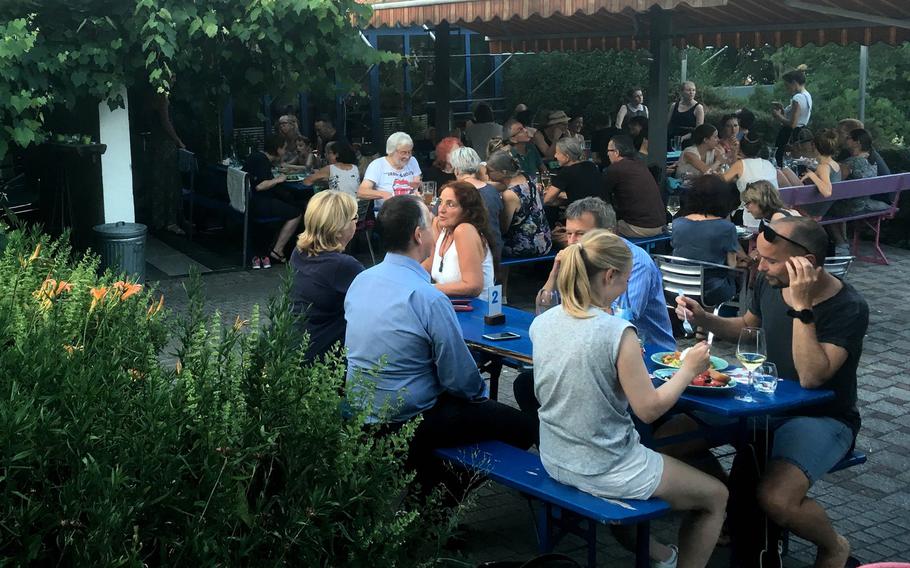 The temperature was over 90 degrees outside, and it felt even worse in our stuffy Stuttgart home where we reside without air conditioning like the natives.

On dog days like these, it’s best to head out for dinner — preferably someplace green and lush. Tucked between gardens in the Wartberg valley section of Stuttgart’s north side, there’s a little oasis that’s probably off the beaten track for most city dwellers.

Ins Blaue, situated across from Killesberg Park and halfway down a hillside accessed by curving trails and steps, offers inventive dishes at a reasonable price.

The restaurant has seating for about 40 people outdoors and a smaller indoor dining section. It’s got outdoor benches like a beer garden, but a flair that borders on New Age. There’s soothing background music, Eastern-style art, hipster-looking staff and a chef who can change the menu on a whim.

I ordered lentil stew and spicy sausages served with leafy greens, thinly sliced yellow beets and kernels of pumpkin seed. It seemed to be spiced with a hint of curry and maybe something Middle Eastern.

Others at our table tried mushroom lasagna and chicken served with peanut sauce. We shared a watermelon salad with olives, capers, feta and other things tossed into it.

It was all delicious.

On other visits, the menu differed. I can recall a beer-based goulash, for instance. The salads also are filled with surprises, often herby, seedy and decorated with edible flowers.

There also is a selection of wines from the region, as well as beers and cocktails.

On our recent visit with friends, however, the typically soothing atmosphere was jolted by a man swarm. The extreme heat had driven others in the neighborhood from their homes, which in all likelihood lacked air conditioning as is the German way.

Lines were long. The staff was friendly, but slightly overwhelmed. And the wait was epic. But it didn’t really matter because the dishes eventually arrived and the kids were distracted in between.

Strategically placed 30 yards from Ins Blaue is a small playground with running water where kids can splash and let off steam. Meanwhile, the grown-ups clinked mugs in collective relief. “Prost!”