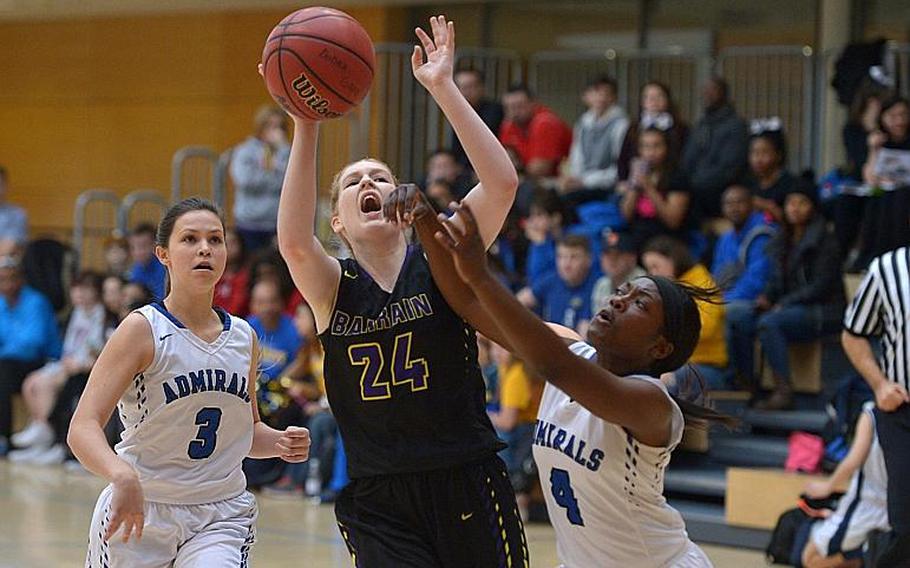 Bahrain's Olivia Johnson goes to the basket against Rota's Shardasia Wilson in a Division II game at the DODEA-Europe basketball finals in Wiesbaden, Thursday Feb. 23, 2017. Bahrain won the game 31-21. Watching the action is Rota's Sophia Restivo. (Michael Abrams/Stars and Stripes)

Bahrain's Olivia Johnson goes to the basket against Rota's Shardasia Wilson in a Division II game at the DODEA-Europe basketball finals in Wiesbaden, Thursday Feb. 23, 2017. Bahrain won the game 31-21. Watching the action is Rota's Sophia Restivo. (Michael Abrams/Stars and Stripes) 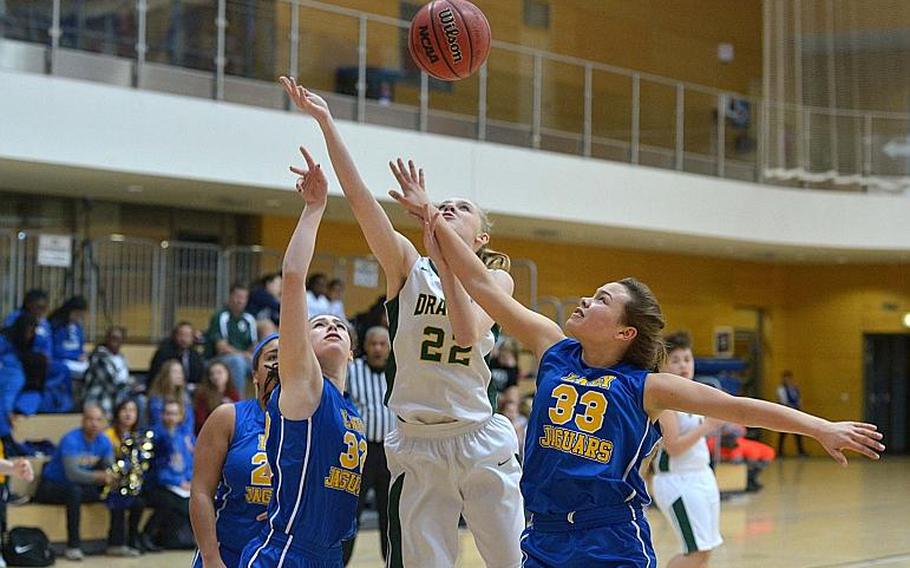 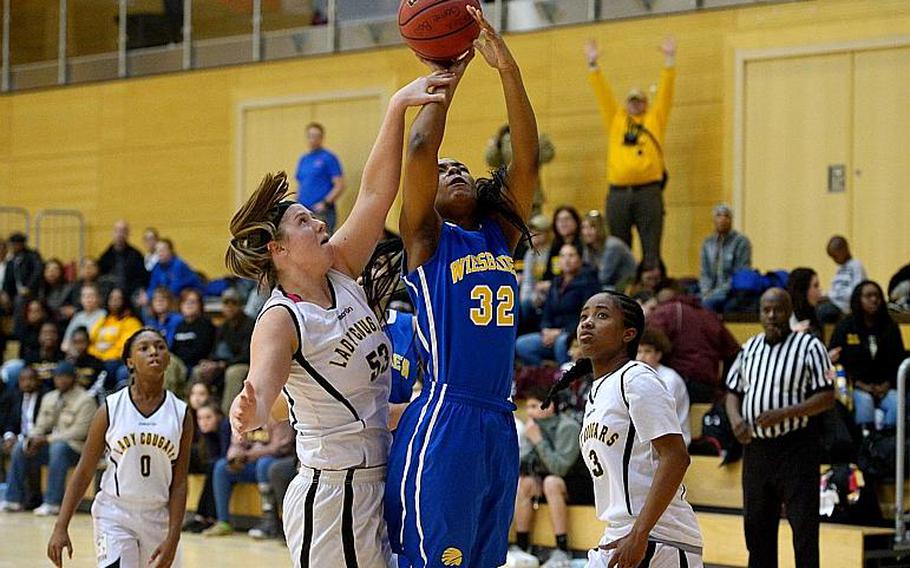 Wiesbaden's Korizmah Colton is fouled by Vicenza's Adrianna Lovelace in a Division III game at the DODEA-Europe basketball finals in Wiesbaden, Thursday Feb. 23, 2017. Wiesbaden beat the Cougars 19-17 in overtime. (Michael Abrams/Stars and Stripes) 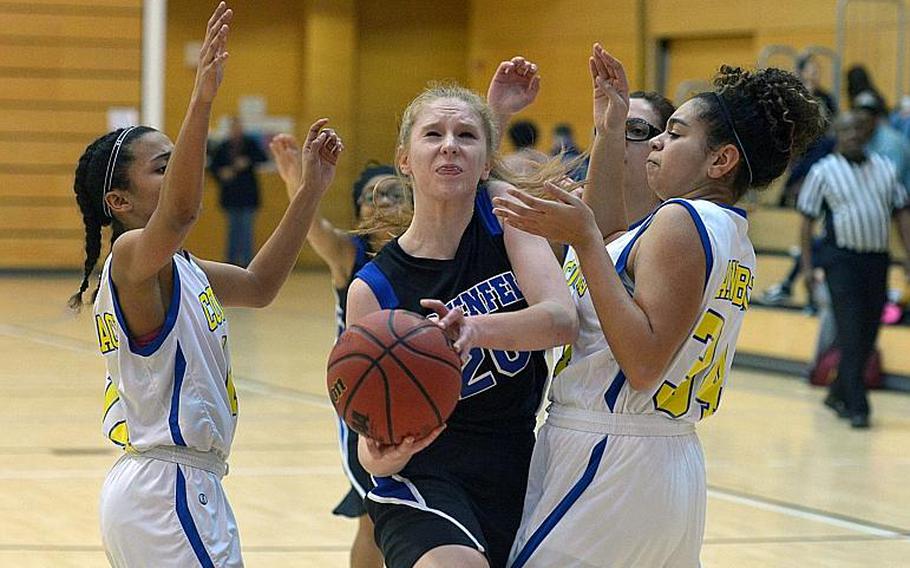 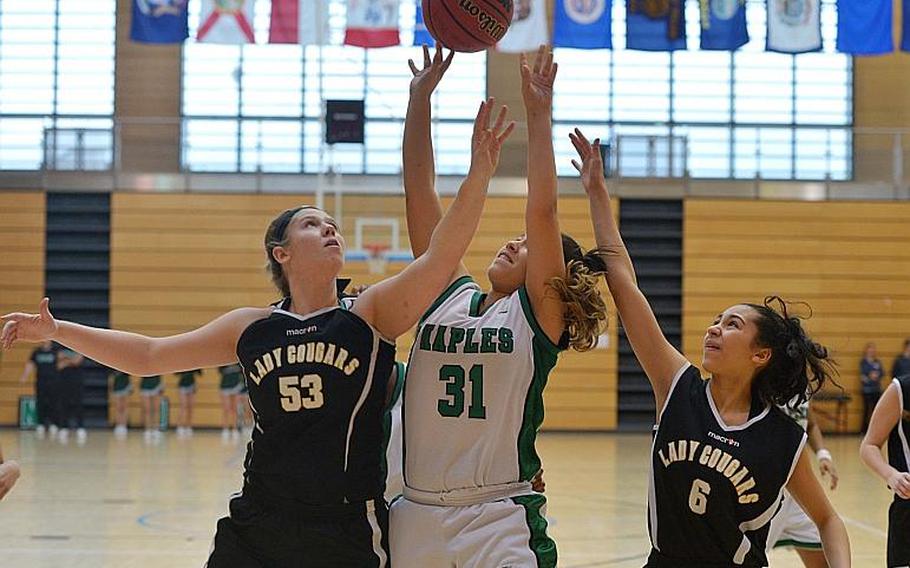 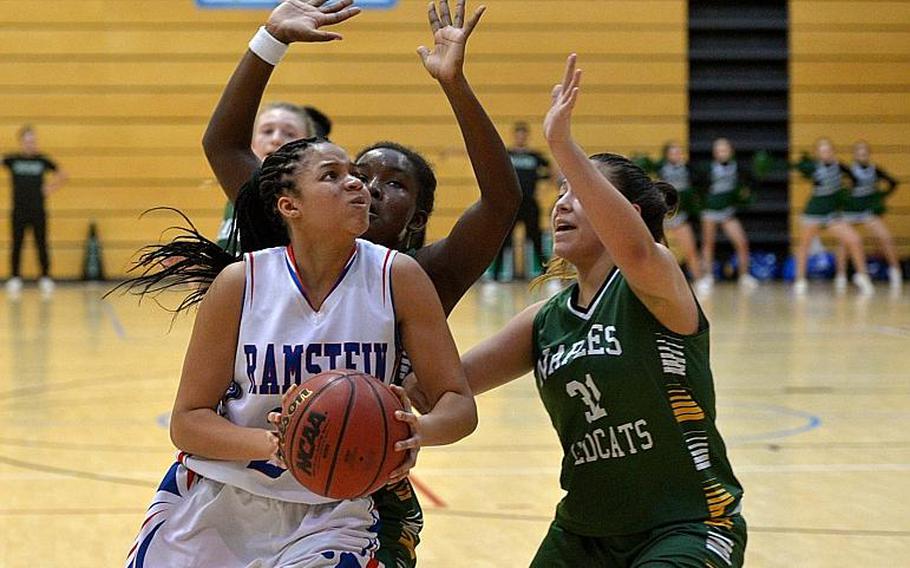 Ramstein's Shemilla Johnson looks to the basket as she tries to get past the Naples defense of Jade Sawyer and Genesis Torrent-Mendez in a Division I game at the DODEA-Europe basketball finals in Wiesbaden, Thursday Feb. 23, 2017. Ramstein beat Naples34-27. (Michael Abrams/Stars and Stripes) 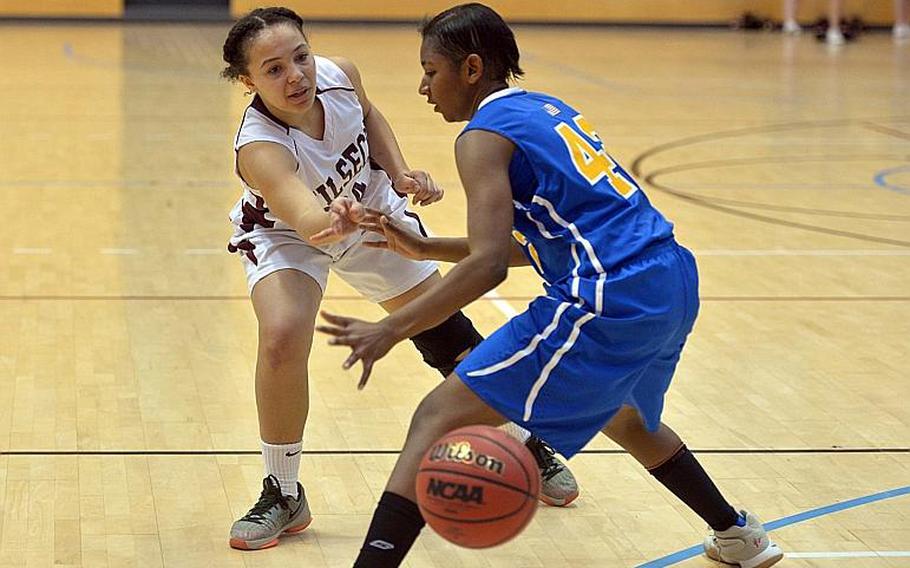 Vilseck's Michaela Lewis passes the ball past Wiesbaden defender Corban Jackson in a Division I game at the DODEA-Europe basketball finals in Wiesbaden, Thursday Feb. 23, 2017. Wiesbaden won the game 27-17 (Michael Abrams/Stars and Stripes)

WIESBADEN, Germany — A serious ankle injury to defending champion Ramstein’s top scorer and captain Ashley Mateo was the major talking point Thursday as semifinal contenders are in place for Friday’s Division I and II showdowns.

Stuttgart, Naples, Ramstein and Lakenheath will continue to take part with a chance to play in Saturday’s Division I final, with Bitburg, Black Forest Academy, Bahrain and the American Overseas School of Rome representing Division II.

While Division III teams look to make one more impression before the end of their pool play, Baumholder looks to be the frontrunner in Division III with a pair of strong performances Friday.

Division IStuttgart 37, Lakenheath 8: Top-seeded Stuttgart left no doubts that it’s ready for knockout play with an affirmative showing against fellow semifinalists Lakenheath. The Panthers took a 13-2 lead in the first quarter and never looked back. Junior center Allyson Taylor led the way with 12 points and point guard Marissa Encarnacion added eight along with tenacious defense.

“There wasn’t a clear high scorer, so we played unselfish basketball which I liked a lot,” Encarnacion said. “Of course, there’s always things to work on, but I do think that whatever we can’t do on offense we can make up for on defense.”

Ramstein 34, Naples 27: Defending champion Ramstein was without leader and top scorer Mateo for both of its games today, as Mateo suffered an ankle injury Wednesday against Wiesbaden. But the Royals pulled through against Naples, who will also advance to the semifinals despite the loss.

“Ashley is our senior leader and captain, MVP and best player on the team,” Ramstein coach Nathan Brewster said. “She’s been a three-year starter, and now the struggle is figuring out how to move forward without her because she has put the team on her back several times this year to get us to wins.”

Junior center Kaitlyn Daniels said Mateo’s absence was felt during this game, but helped the team come together and win it for her.

“We played really well as a team, (backup point guard) Essynce Hall did great, and all of us pulled together and played together because we all love Ashley to death.”

Naples will hope to improve in the knockout stages.

“We’ve come out strong and done a great job controlling the court,” sophomore Victoria Sasse said. “Today we did a great job coming back – even though it didn’t go our way, I’m still proud of the team. “

Division IIBahrain 31, Rota 21: Bahrain used a rarely-seen box-and-one defense in a dominant defensive performance against a Rota team heavily reliant on senior guard Shardasia Wilson, who was covered man-to-man most of the game.

“It was frustrating because it took us a while to realize (they were playing that defense) to make some changes to the offense,” Wilson said.

Rota didn’t score at all in the first quarter but was able to come back and tie the game at 14 apiece after three quarters. An offensive explosion of 17 fourth-quarter points keyed the Falcons’ victory. Wilson was held to a single three-pointer.

Bitburg 41, Rota 27: Bitburg’s twin towers of Elise Rasmussen and Amadi Bradshaw were too much in the paint for the Admirals, who narrowly missed out on a semifinal berth with this loss.

Despite the loss, Rota put on an impressive three-point shooting performance, particularly from junior Emma Hook, who kept Rota in the game for long stretches with her perimeter shot.

In the end, Rasmussen was too much to overcome, as she hit a series of morale-sapping layups in the third quarter to extend the Barons’ advantage to double digits.

Division IIIHohenfels 22, Ansbach 15: In an all-Bavarian Division III encounter, Hohenfels outlasted Ansbach on the strength of an impressive start, though Ansbach made a late bid for the comeback, the Tigers had too much.

Sophomore forward Bilyana Garland was the Tigers’ leading scorer in the game with eight.

“Giving the ball to right people, being in the right positions and taking our time caused us to make a lot of those shots,” she said of the positive start her team made. Keeping our composure was good, we didn’t get wild.”

Baumholder 37, Sigonella 21: An unbelievable 20-0 run in the first half was enough for an impressive Baumholder team to make its claim as the top team in Division III this year, though two more days of games are to be played. The senior-laden squad was able to make use of its experience and athleticism to thwart the Jaguars with a full-court press and a 3-2 defensive formation.

“Most of what this was was teamwork, defense and rebounds, that’s what keeps us in it,” said Baumholder senior post Eliyah Tilman.