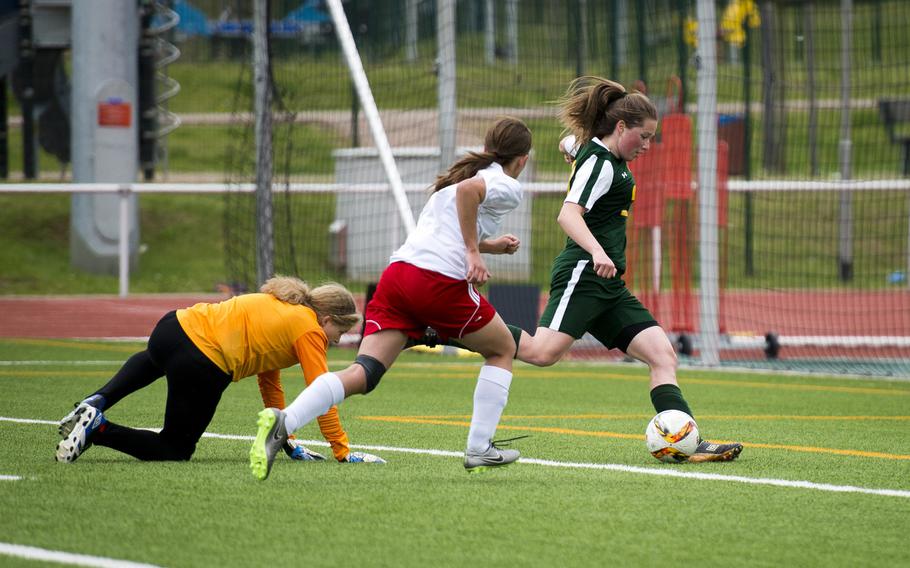 SHAPE's Sunniva Leivdal, right, gets past Kaiserslautern's Aleysha Meyers and goalkeeper Atlanta Haynes for a shot in Kaiserslautern, Germany, on Saturday, May 14, 2016. SHAPE might have the best shot this season of ending the annual Ramstein-Stuttgart championship match. (Michael B. Keller/Stars and Stripes)

SHAPE's Sunniva Leivdal, right, gets past Kaiserslautern's Aleysha Meyers and goalkeeper Atlanta Haynes for a shot in Kaiserslautern, Germany, on Saturday, May 14, 2016. SHAPE might have the best shot this season of ending the annual Ramstein-Stuttgart championship match. (Michael B. Keller/Stars and Stripes) 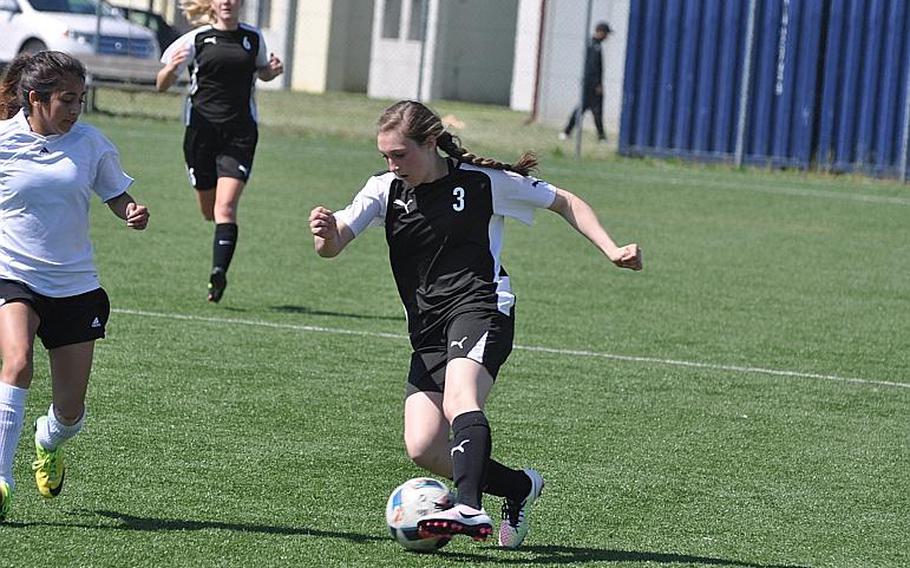 Stuttgart freshman Emily Smith, one of her team's assist leaders, will try for her first DODEA-Europe championship this week as the Panthers attempt to defend their title. (Kent Harris/Stars and Stripes)

Division I The most predictable of all DODEA-Europe championship races has followed its familiar projections this spring.

The Stuttgart Panthers and Ramstein Royals are the teams to beat once again, to the point that they can’t even beat each other. The teams played to a 2-2 tie March 26, representing the only time either squad was at serious risk of a loss this spring.

That continues a storyline that has played out over the course of the past half-decade. The Panthers and Royals meet annually in the championship game, where they play a fiercely intense match that could fall in either’s favor. They’ve alternated titles over that span, with Stuttgart winning last year’s edition.

Most of the available evidence suggests that trend will continue this season.

Both teams score with ease, led by the offensive talents of Ebony Madrid, Kendall Spohr and Erin Barnett for the Royals and Kat Farrar, Emily Smith and Julia Smith for the Panthers, among many other productive players on both squads. The teams are equally adept on the other end, routinely holding opponents to one or zero goals per game. The Royals and Panthers don’t look vulnerable to a letdown, but that won’t stop teams from trying - even if they’ve already failed at an upset in the regular season.

SHAPE is perhaps the most dangerous of those. Freshman striker Sunniva Leivdal has bumped the Spartans to a new level of offensive excellence, and they were able to stay even with Ramstein for a half before taking a 3-1 loss on April 30.

Naples, getting further and further removed from its own days as a Division II dynasty, managed to hang a few goals on Stuttgart on April 30 but couldn’t slow the Panthers’ offense in a 7-3 defeat.

SHAPE, Naples and fringe contenders such as Wiesbaden and Kaiserslautern will need a lot to go right in potential tournament rematches if they are to disrupt the duopoly atop Division I.

Division II Black Forest Academy wasted no time this spring in establishing itself as the team to beat in the DODEA-Europe middle class.

In their April 16 opener the Falcons dominated defending Division II champion Hohenfels 7-0. A week later, they pounded Ansbach 9-0; a week after that, they handled two more divisional opponents, American Overseas School of Rome and Aviano, by respective scores of 8-1 and 3-1.

But BFA, a 2015 semifinalist, isn’t the only contender ready to supplant a Hohenfels squad that might be ill-equipped to defend its title.

A month before the Falcons made their opening statement, new Division II contender Florence debuted with an impressive 4-2 win over Division II mainstay Aviano. Just a year after a harmless early exit from the Division III bracket, Florence could be prepared to make an impact at a higher level.

Both BFA and Florence will have to contend with AFNORTH, the obvious heir apparent to the throne if Hohenfels indeed falls out of contention.

The Lions lost to Hohenfels 1-0 in last year’s title game, and have returned with a souped-up offense led by Caitlyn Helwig and Caitlin Fenton.

Rota, meanwhile, takes its usual spot as a wild-card contender. The Admirals played AFNORTH to a 2-2 tie on April 22, suggesting they’ll be right in the mix as the bracket moves into its later rounds.

But the Dragons won’t run unopposed.