Study of marijuana’s effects on PTSD struggles to recruit vets 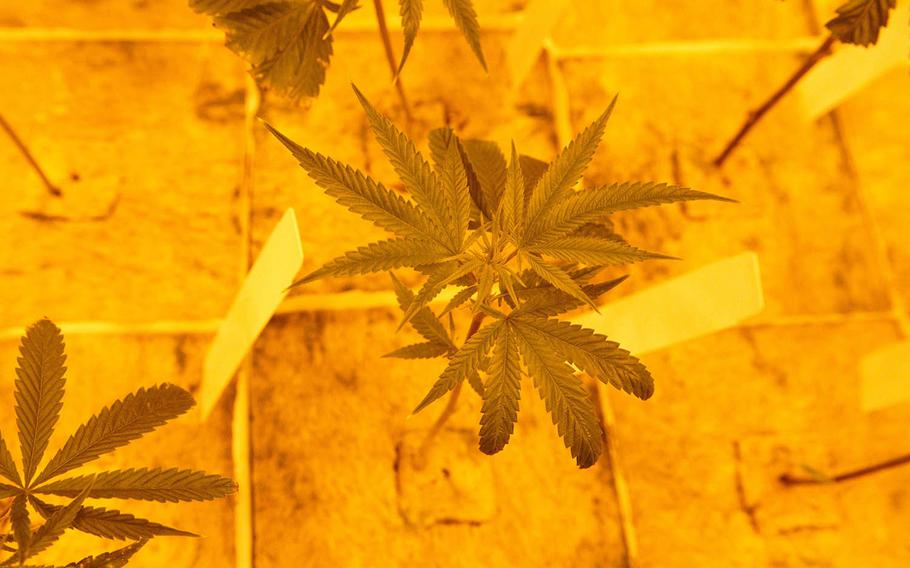 Sue Sisley, a psychiatrist known nationally as an advocate of medical marijuana research, is running a study, currently underway in Phoenix, about marijuana's effects on veterans with post-traumatic stress disorder. (Nikki Wentling/Stars and Stripes)

WASHINGTON — After seven years of struggling to launch the first government-approved study of marijuana’s effects on veterans with post-traumatic stress disorder, lead researcher Sue Sisley was optimistic in February, when her team was finally allowed to start enrolling veterans to participate.

Seven months later, though, Sisley has screened thousands of veterans, yet enrolled only 26 who meet the eligibility criteria – prompting concern the study’s parameters must change. If that happens, the study could be delayed, Sisley said.

At issue is the researchers’ lack of access to the Department of Veterans Affairs hospital in Phoenix, just 20 miles from where the study is being conducted. Sisley sees potential there to find a large group of veterans who might be resistant to other PTSD treatments and looking for an alternative.

“None of this would have to occur if the Phoenix VA hospital would start cooperating,” Sisley said. “If that happens, we could easily complete the trial.”

The VA has said federal law restricts the agency from researching medical marijuana or referring veterans to projects involving marijuana.

Limited pool As of Thursday, the research team had completed 319 telephone screenings, and 78 veterans were interviewed in person. Sisley has been contacted informally by more than 3,000 veterans, through Facebook, Instagram, Twitter and LinkedIn.

On Wednesday, she enrolled the 26th veteran. The Food and Drug Administration, Drug Enforcement Agency and Department of Health and Human Services have approved the clinical trial, which needs 76 participants to be viable.

Most of the veterans aren’t making it into the study because of where they live, Sisley said. Those veterans participating are required to visit the Scottsdale Research Institute in Phoenix 10 times over 18 weeks, and then have a six-month follow-up.

The Colorado Department of Public Health and Environment is funding the study with a $2.1 million grant, but there’s not enough money to cover travel for out-of-state veterans, Sisley said. Having veterans relocate to Arizona could also affect the results, she said.

“Relocating for weeks with no financial assistance, they would lose all their social support back home, and that could harm the data because they would be stressed by the relocation,” she said.

The study, which uses four potencies of marijuana, intends to replicate real-world use of the drug. Participants are allotted 1.8 grams each day, but they can choose how much to smoke. They’re asked to keep a daily journal.

The Multidisciplinary Association for Psychedelic Studies in Santa Cruz, Calif., is sponsoring the study. The association began clamoring for participants after Johns Hopkins University in Baltimore dropped out in March, transferring its work to the small team in Phoenix and narrowing the pool of veterans who could participate. Johns Hopkins said its goals were not in alignment with MAPS. The decision came after MAPS spoke out against the poor quality of government-provided marijuana used in the research.

Now, Sisley is fighting to gain access to more veterans at the Phoenix VA, though the agency’s response is unwavering.

Against VA policy Sisley wrote a letter to VA Secretary David Shulkin in August, pleading for access to discuss the study with VA health care providers in Phoenix so they could refer their patients to it. She also asked to post FDA-approved flyers around the hospital.

“We are being blocked from doing so, despite the fact that this is a federally legal study aiming to seek information on how cannabis may help veterans with PTSD,” said Rebecca Matthews, clinical operations manager for MAPS. “Access to veterans at the local VA in Phoenix would be a boost for recruitment, for sure. We are hopeful the VA will change their position to better support our veterans and research that aims to support veterans.”

VA policy implemented in 2011 prohibits health care providers from sharing their opinions with veterans about marijuana or recommending it for medical use.

In a statement Wednesday, the VA remained steadfast in its position.

“If the researcher is truly interested in finding veterans for her study, she should spend more time recruiting candidates and less time writing letters to the media,” said VA spokesman Curt Cashour.

He suggested Sisley speak to veterans service organizations or state officials in Arizona for help with recruiting.

Even though some veterans organizations, such as the American Legion, have come out in support of the study, local posts haven’t mustered many volunteers, Sisley said. Referrals from those local posts are “dwindling.”

The potential effects of not recruiting veterans fast enough are unclear.

Sisley and Matthews said the eligibility criteria might have to change. To enroll, veterans must be diagnosed with chronic PTSD brought on by military service, and researchers want to recruit a range of ages, as well as both men and women. Other specific eligibility criteria aren’t publicly disclosed, Sisley said, to prevent veterans from lying to gain entry to the study.

“Most the veterans look really defeated when they don’t get invited to enroll,” she said. “They get screened out for something, and we’re not allowed to tell them why.”

Enrolled veterans have already started the trial. Sisley worries that if the criteria change, the lab would eventually run out of work while the amendments go through an approval process -- creating a temporary shutdown.

Matthews, though, firmly believes there will be no delay.

“We have worked diligently for seven years to get this study running,” she said. “We will not pause or stop the study over this small hiccup. We’ve had to clear much heftier roadblocks in the past.”

‘More than words’ During his “State of the VA” address at the White House in May, Shulkin said he was open to learning from any evidence that marijuana could be used to treat veterans.

“I believe everything that could help veterans should be debated by Congress and medical experts,” Shulkin said at the time. “If there is compelling evidence that is helpful, I hope the people look at this and come up with a right decision, and we will implement that. There may be some evidence this is beginning to be helpful.”

With Sisley and other researchers being blocked from the Phoenix VA, veteran and medical marijuana advocate Sean Kiernan said he’s worried Shulkin’s message was just talk. Kiernan works with the Weed for Warriors Project and has advocated for marijuana as an alternative to addictive opioids. The group provides information and access to free, cannabis-based medicine for veterans with proper paperwork.

He referenced an Aug. 24 article from the VA Office of Research and Development that found there was a “surprising” lack of evidence about marijuana’s medical effects. The paper stated there were “very few studies,” and some of them were flawed.

Dr. Devan Kansagara, the lead author on the project, said in the paper, “We need better research.”

“We need more than words stating everyone supports research; we need to see that support,” Kiernan said. “We need the results of this study for our institutions to change.”

The American Legion, which has 2 million members, issued its support for the study last summer. Louis Celli, the Legion’s national director of veterans affairs and rehabilitation, said the organization had been attempting to mediate between Sisley and the VA.

“The American Legion is disappointed that we have been unsuccessful, so far, in fostering a comprehensive relationship,” he said.

Since exploring marijuana as a potential treatment for PTSD and other conditions, American Legion leadership has heard from many of its members and other veterans who said it’s worked for them.

“We believe Dr. Sisley’s study will form the basis for all future research in this area,” Celli said. “If this study fails, we all fail – and the veterans will be the ones to suffer for it.”