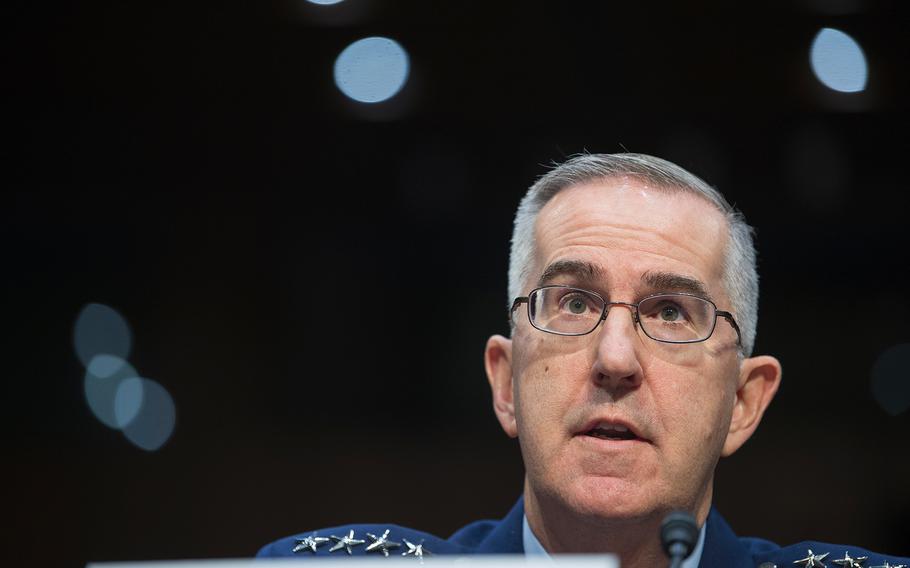 WASHINGTON — The White House has tapped the Air Force general in charge of the Pentagon’s nuclear enterprise and other strategic assets to become the military’s No. 2 general later this year.

Gen. John Hyten, who has commanded U.S. Strategic Command for more than two years, was formally nominated late Monday to become the vice chairman of the Joint Chiefs of Staff, according to Senate records. If approved by the upper chamber of Congress, he would replace Air Force Gen. Paul Selva, who is due to retire in the coming months.

The vice chief’s duties are not set by law or policy, and his role is typically set by the chairman. Hyten would become the 11th vice chief, if confirmed.

Hyten, 59, has served as STRATCOM chief at Offutt Air For Base in Nebraska since November 2016, according to his Air Force biography. He previously served as the commander and deputy commander of Air Force Space Command, and he has a long history of serving in space- and cyber-focused positions within the Air Force and the joint force.

He is a 1981 graduate of Harvard University in Massachusetts, where he commissioned into the Air Force through its ROTC program and he earned a bachelor’s degree in engineering.

As STRATCOM chief, Hyten has been charged with command and control of the U.S. military’s vast nuclear programs, operations to deter other nuclear powers, the missile defense of the U.S. homeland, and all military space operations.

He has advocated for the building of the new U.S. Space Command, a combatant command that would take over space operations from STRATCOM and which Pentagon officials intend to stand up in the coming months. He has also supported Pentagon efforts to establish a sixth military service, the Space Force.

Hyten has often warned of the need to modernize the U.S. nuclear enterprise and invest in advanced space-based missile defense systems in the face of growing threats from great-power adversaries Russia and China.

Several lawmakers voiced their approval of Hyten’s selection for vice chief once his nomination was made public. Sen. Ben Sasse, R-Neb., described him as a “thoughtful warrior” who would serve the nation well.