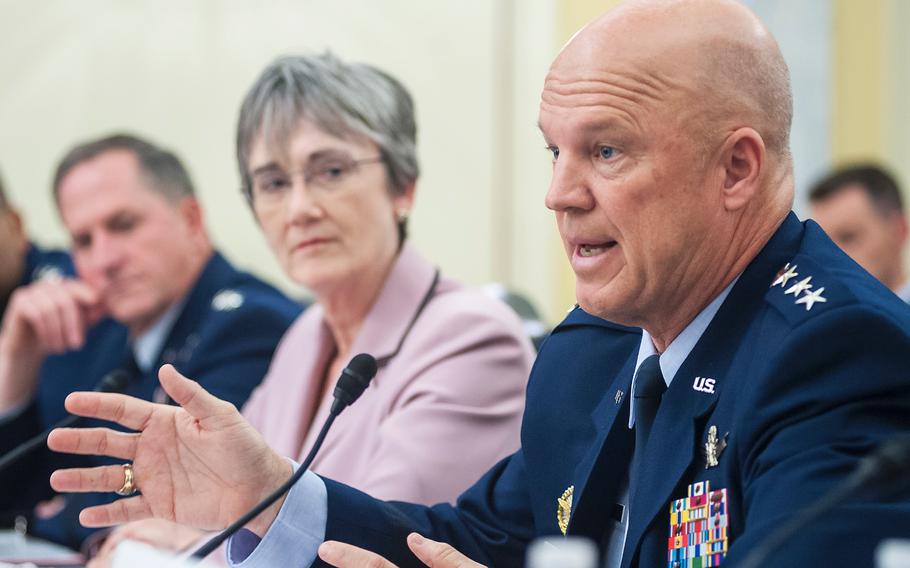 Gen. John Raymond, commander of the Air Force Space Command, testifies on May 17, 2017, during a Senate Armed Services subcommittee hearing on the U.S. military's space organization, policy and programs. Looking on are Secretary of the Air Force Heather Wilson and Air Force Chief of Staff Gen. David Goldfein. (Carlos Bongioanni/Stars and Stripes)

WASHINGTON – The Air Force general nominated to lead the Pentagon’s newest combatant command that would direct the U.S. military’s space operations told lawmakers on Tuesday that any future conflicts with major powers such as Russia or China would be partially fought in space.

Raymond has spent the vast majority of his 35 years in the Air Force working in space operations. He now leads the organization responsible for training and equipping the Air Force’s roughly 15,000 space operators while also leading space forces assigned to U.S. Strategic Command.

Pentagon officials have said once Raymond is confirmed, the Defense Department will begin establishing U.S. Space Command as its 11th unified combatant command, which are joint forces that command and control operations within a certain geographic region or functional area such as cyber operations or special operations. Space operations have been commanded by STRATCOM, which is primarily responsible for America’s nuclear capabilities, since 2002 when the former U.S. Space Command was scuttled during a post-9/11 reorganization.

In recent years, the Pentagon has pushed for Space Command to return as a full combatant command because of elevated tensions within the space domain, especially with the increase in recent years of Chinese capabilities, which include the demonstration of China’s ability to target and destroy orbiting satellites with ground-launched missiles. The Senate Armed Services Committee has backed the Pentagon proposal. Separately, it appears poised to approve the Defense Department’s request to build a new uniformed service focused on the space domain, which would be known as the U.S. Space Force.

Raymond on Tuesday endorsed all of the proposed shifts in the Pentagon space enterprises, telling senators if the United States does not react quickly to advancing Chinese and Russian space capabilities, those nations would surpass American capabilities, a common refrain in recent years from Pentagon leaders.

“It’s really important that we make some changes to stay ahead of that growing threat,” he said. “I am comfortable today. I am comfortable we are the best in the world [at space operations]. But we need to move fast, and with your support we are going to get there.”

China and Russia have advanced their space capabilities in recent years primarily by watching how the United States has integrated its capacities into its military operations, Raymond said. The U.S. military relies on space operations in some capacity for nearly everything it does, from GPS navigation to communications to guiding weapons to specific targets, he said.

In addition to demonstrating their ability to use anti-satellite missiles, China also has the ability to jam critical GPS and communications satellites, Raymond said. He told SASC members that China also has a directed energy – or laser – threat in space and they are involved in “concerning activities in orbit,” but he declined to elaborate on those actions for security reasons.

If confirmed to lead U.S. Space Command, Raymond’s focus would be on the warfighting mission in space – that is coordinating the use of the individual military services’ space troops and assets and providing key functions including controlling space-based missile warning, communications, navigation, weather and imagery. His role would also focus on deterring the potential for a fight to extend into space and defending the myriad U.S. satellite constellations.

In the SASC-approved version of the 2020 National Defense Authorization Act, legislation that provides policy direction to the Pentagon, the new Space Force would be built within the Air Force Department – similar to how the Marines are within the Navy Department – and would be led by the commander of U.S. Space Command, who would serve in two roles.

Asked Tuesday about the proposal, Raymond declined to endorse or renounce leading Space Force and Space Command, telling senators that he had not seen the proposed legislation.

“I fully am supportive of a space force,” the general said. “If confirmed, I look forward to working very closely with this committee and our leadership to get this right for the nation.”