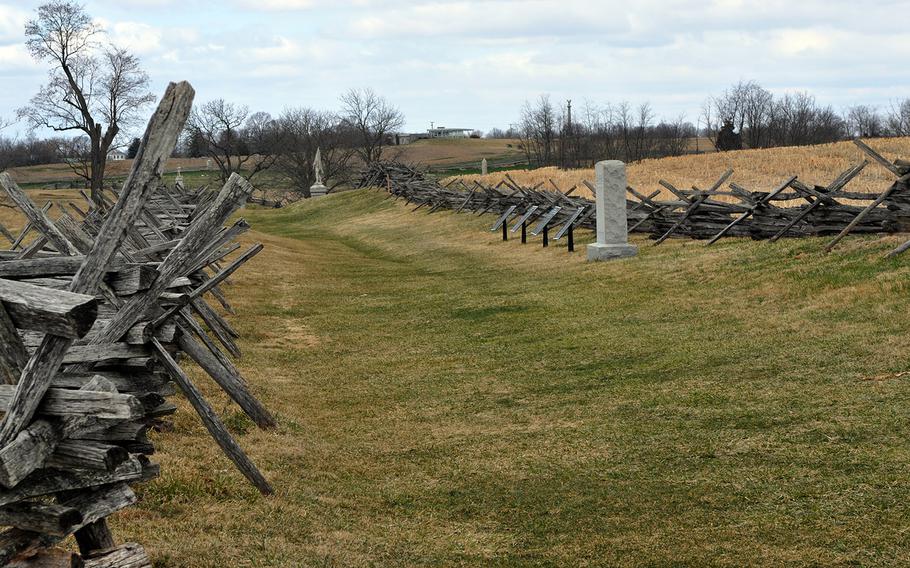 Buy Photo
Union troops broke through Confederate defenders at the Sunken Road at the Battle of Antietam on Sept. 17, 1862. Union losses were so heavy that they were unable to exploit the gains in the bloodiest one-day battle in American history. (Robert H. Reid/Stars and Stripes)

Buy Photo
Union troops broke through Confederate defenders at the Sunken Road at the Battle of Antietam on Sept. 17, 1862. Union losses were so heavy that they were unable to exploit the gains in the bloodiest one-day battle in American history. (Robert H. Reid/Stars and Stripes) Buy Photo
Civil War cannon stand in front of the Dunker Church at the Battle of Antietam. The church was the focus of Union attacks on Confederate lines that began the bloodiest one-day battle in American history. (Robert H. Reid/Stars and Stripes) 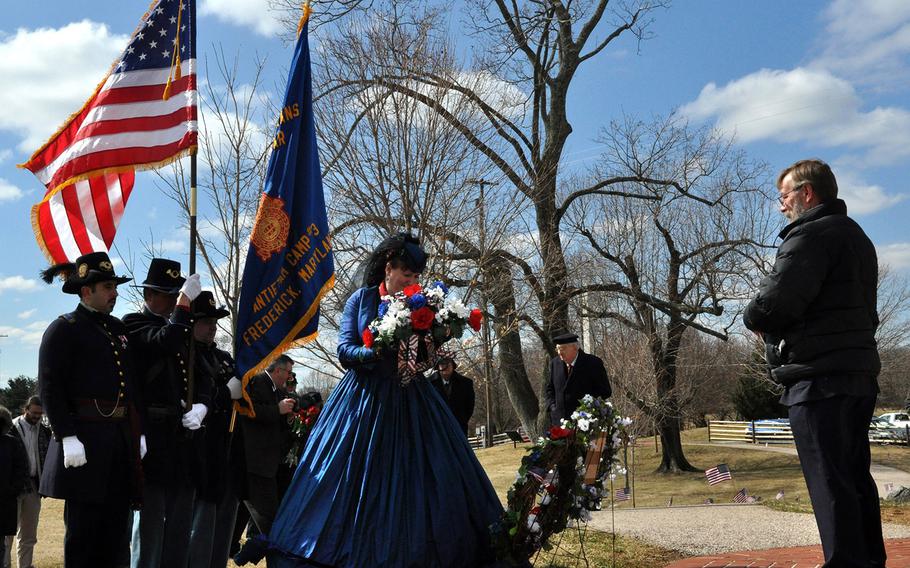 Buy Photo
An honor guard of the Gettysburg Blues, Sons of Union Veterans of the Civil War, stand at attention Saturday as wreaths are laid in ceremonies honoring 20 Union soldiers awarded the Medal of Honor for heroism at the Battle of Antietam. The Union victory enabled President Abraham Lincoln to issue the Emancipation Proclamation, paving way for the end of slavery in the United States. (Robert H. Reid/Stars and Stripes) 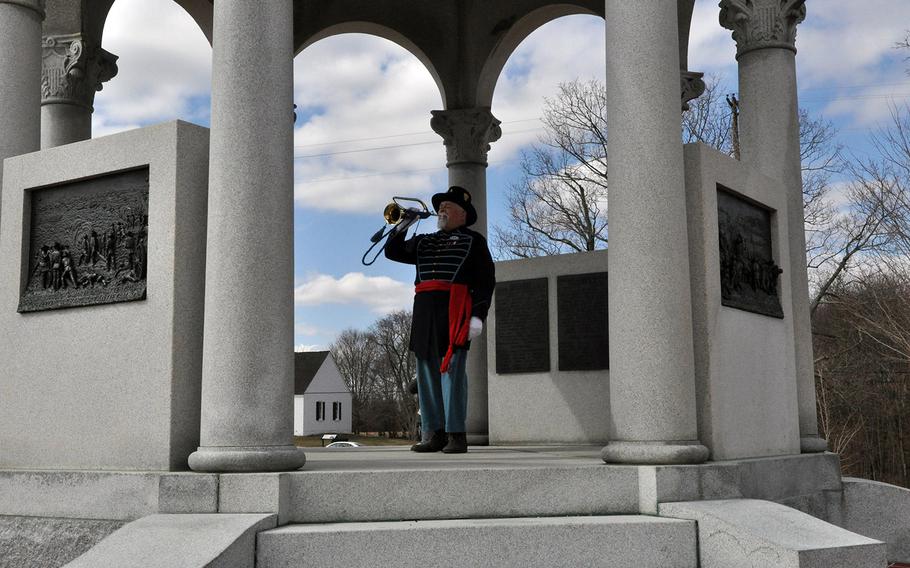 Buy Photo
Bugler Paul McMillon of the Gettysburg Blues, Sons of Union Veterans of the Civil War, plays taps Saturday at ceremonies honoring the 20 Union soldiers awarded the Medal of Honor at the Battle of Antietam. The ceremony also paid respects to all those Union and Confederate soldiers who lost their lives at Antietam. (Robert H. Reid/Stars and Stripes) 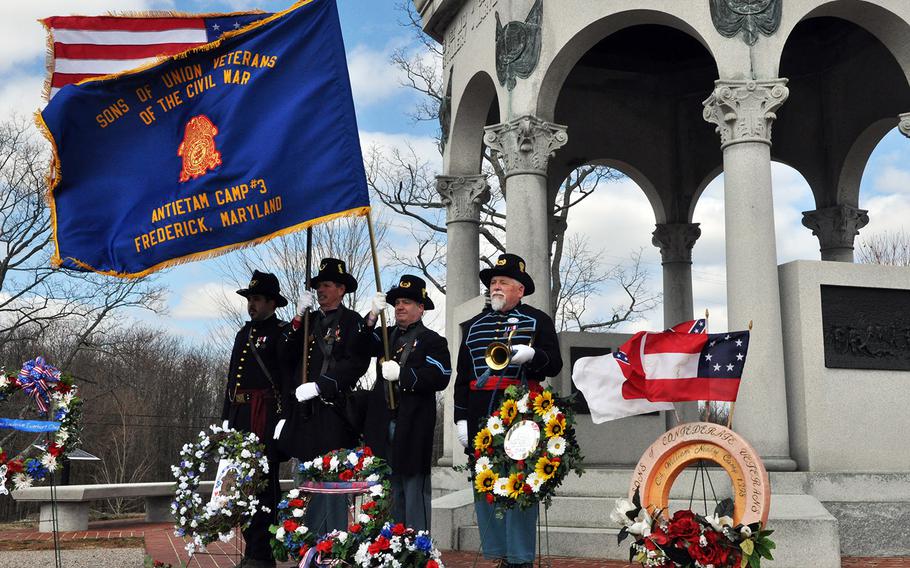 Buy Photo
An honor guard of the Gettysburg Blues, Sons of Union Veterans of the Civil War, stand before a memorial to Maryland soldiers at the Battle of Antietam. The 20 Union soldiers who were awarded the Medal of Honor wqere remembered at ceremonies at the battlefield on Saturday. (Robert H. Reid/Stars and Stripes) 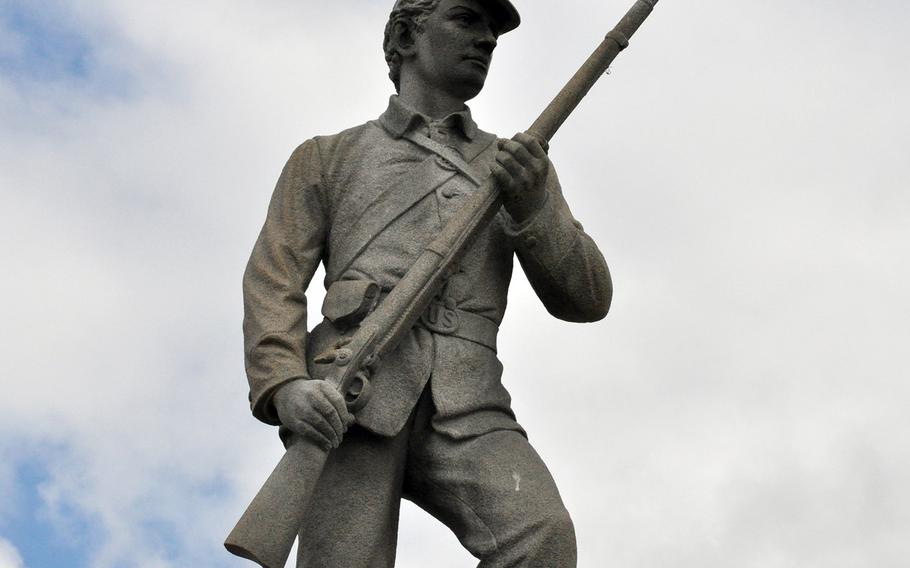 Buy Photo
A statue of a Union soldier stands as a monument to the soldiers of the 128th Pennsylvania Volunteers at the Antietam National Battlefield Park. A member of the unit, Ignatz Gresser, was among 20 Union soldiers honored Saturday for having been awarded the Medal of Honor at Antietam, the bloodest one-day battle in U.S. history. (Robert H. Reid/Stars and Stripes) 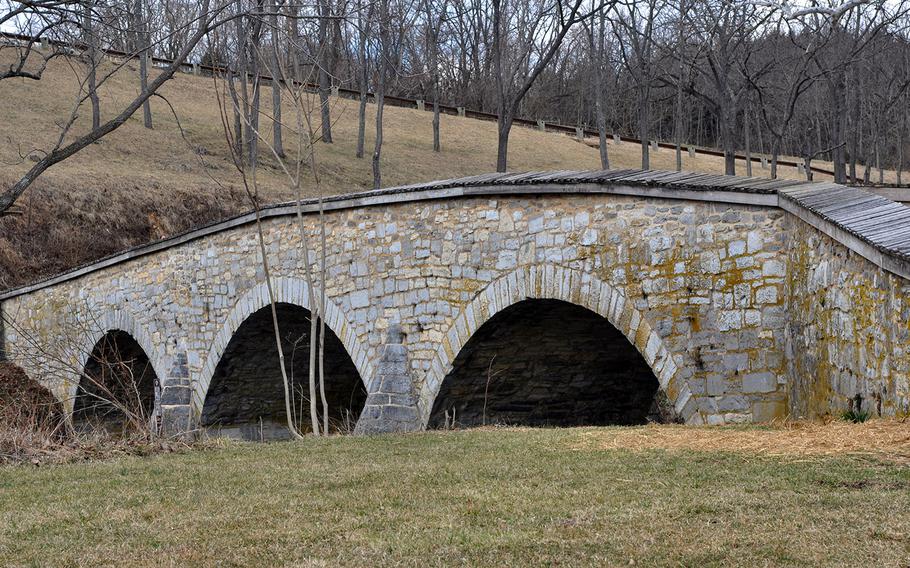 Buy Photo
The old stone Burnside's Bridge over Antietam Creek marks the spot where Union soldiers battled Confederate forces at the Battle of Antietam. After more than three hours of bloody fighting, Union troops managed to cross the bridge defended by mostly Georgia troops who inflicted heavy casualties on the attackers. (Robert H. Reid/Stars and Stripes) 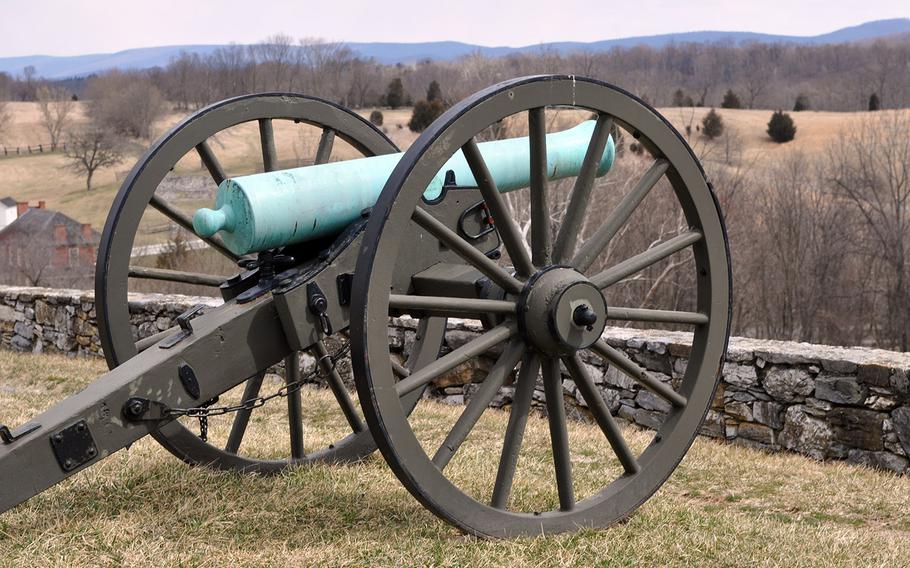 Buy Photo
A cannon stands as a silent sentinel where Union forces broke through Confederate lines on the afternoon of Sept. 17, 1862 in the Battle of Antietam. As the Union troops moved forward, Confederate reinforcements arrived from nearby Harpers Ferry, W.Va., driving back the Union soldiers and ending the battle without a decisive Union victory. (Robert H. Reid/Stars and Stripes)

ANTIETAM NATIONAL BATTLEFIELD, Maryland — One was a German shoemaker who never learned to read English. Another was a carpenter. A third was barely 15 years old.

On Sept. 17, 1862, they were among 20 Union soldiers whose courage in the Battle of Antietam earned them the Medal of Honor, the nation’s highest, and at the time the only major award for gallantry in action.

Regional chapters of the Sons of Union Veterans of the Civil War, an organization of descendants of Union servicemembers, gathered Saturday at the battlefield to honor the 20 Medal of Honor recipients and pay their respects to the more than 3,650 soldiers of both sides who died at Antietam, the bloodiest one-day battle in American history.

Representatives of various organizations, including the Sons of Confederate Veterans, laid wreaths at a monument to Maryland soldiers before an honor guard of the Gettysburg Blues, a Civil War re-enactment group of descendants of Union veterans.

The Union victory at Antietam, though not decisive, turned back the South’s first invasion of the North and provided President Abraham Lincoln with political cover to issue the Emancipation Proclamation, which freed slaves in Union-controlled parts of the Confederacy and discouraged Britain and France from openly supporting the Confederates.

“Whether their uniforms were gray or blue, they were our brothers,” Rev. Joseph Foster, chaplain of the SUVCW Chapter in Frederick, Md., told an audience of several dozen people at the Dunker Church, a focal point of Union attacks during the battle.

“Each of those gallant warriors stepped up and gave their all because they shared a common love of their nation.”

More than 153 years later, relatively few details remain about what the individual recipients did on the Antietam battlefield to receive their medals. Eight of the 20 were cited either for saving their regimental colors or capturing Confederate battle flags while under fire.

Among them was Pvt. Charles Cleveland, a carpenter from Utica, N.Y., who later served as chief of police there until he died in 1908. The official citation honored Cleveland for picking up the fallen colors and carrying “them into action after the color bearer had been shot.”

Citations for other soldiers refer simply to them “saving the lives of several of his comrades” or rescuing “a badly wounded comrade and … conveying him to a place of safety” without the rich details of more recent accounts.

Some of the awards were not bestowed until a generation later when the Grand Army of the Republic, a politically-powerful organization of Union veterans of the Civil War, accelerated efforts to identify and honor heroes at a time when first-hand memories of the war had begun to fade.

“There never was much self-promotion in those days,” said Eugene Morthoff of East Berlin, Pa., senior vice commander of the Sons of Union Veterans. “The veterans didn’t think they did anything that everyone else didn’t do. And there were no prescribed rules (for earning the award). It kind of evolved.”

One of those recognized only decades after the battle was John Cook of Hamilton County, Ohio, who enlisted in a Union artillery regiment as a bugler at age 14.

A year later, according to official citations, he helped a wounded officer to safety at Antietam and returned to the forward cannon only to find most of the crews dead or wounded. He grabbed an ammunition pouch from a dead soldier and loaded “a gun under a terrific fire of the enemy,” according to his official citation issued in 1894.

Ignatz Gresser, a German-born shoemaker who settled in Allentown, Pa., as a teenager, waited 34 years for his medal, which he wore proudly for the rest of his life. According to his citation, Gresser raced through an open field under fire and carried a wounded comrade back to safety while serving in the 128th Pennsylvania Infantry, a volunteer unit rushed to war with almost no training.

The lack of adequate training, especially by modern standards, was probably a major factor in the huge casualties at Antietam. According to official accounts, the two sides suffered a combined total of 22,717 killed, wounded, captured or missing in only one day of fighting.

It began with a Union attack at dawn on Confederate Gen. Robert E. Lee’s left flank near Dunker Church. As the fighting swirled, Union forces pierced the Confederate center at the Sunken Road but were unable to exploit the gain because of heavy losses.

That opened the door to a decisive Union victory. But as Union forces poured across the bridge, Confederate forces arrived from nearby Harpers Ferry, W.Va., and stopped the advance. The fighting ended, and Lee withdrew into Virginia with his army battered but intact. The war would rage on for nearly three more years.

When Union and Confederate armies faced off at Antietam, an area of rolling hills and farmland a few miles across the Potomac River from West Virginia, the Medal of Honor was something new for the U.S. military.

President Lincoln signed legislation establishing the decoration on Dec. 21, 1861 — but only for “petty officers, seamen, landsmen and Marines” who “most distinguish themselves by their gallantry.”

Without clear guidance and few precedents, the Medal of Honor was bestowed on people for service which did not meet the standard, including 864 medals awarded to members of the 27th Maine Regiment, some for simply re-enlisting, and 29 who served as Lincoln’s funeral guards.

Those were withdrawn in 1916 when a board of general officers reviewed each Medal of Honor award.

Of the 3,493 recipients of the Medal of Honor, more than 40 percent — or 1,523 — were honored for gallantry during the Civil War. The most recent was award was bestowed Nov. 6, 2014 to a Civil War soldier, Lt. Alonzo Cushing who was killed in the Battle of Gettysburg.