Soldier behind ‘Thank You’ opens up to help others 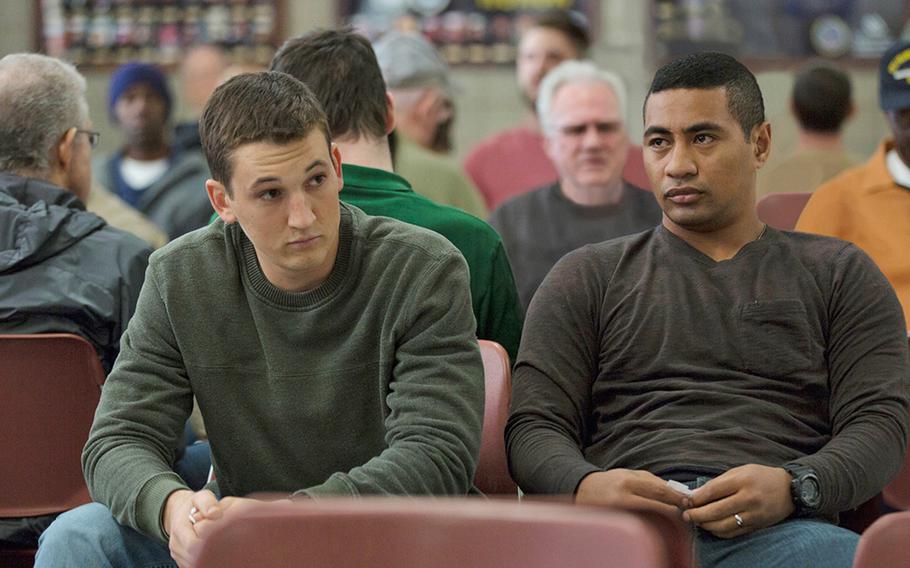 Miles Teller, left, and Beulah Koale star in DreamWorks Pictures' "Thank You for Your Service." The drama follows a group of U.S. soldiers returning from Iraq who struggle to integrate back into family and civilian life, while living with the memory of a war that threatens to destroy them long after they've left the battlefield. (DreamWorks Pictures)

Miles Teller, left, and Beulah Koale star in DreamWorks Pictures' "Thank You for Your Service." The drama follows a group of U.S. soldiers returning from Iraq who struggle to integrate back into family and civilian life, while living with the memory of a war that threatens to destroy them long after they've left the battlefield. (DreamWorks Pictures) 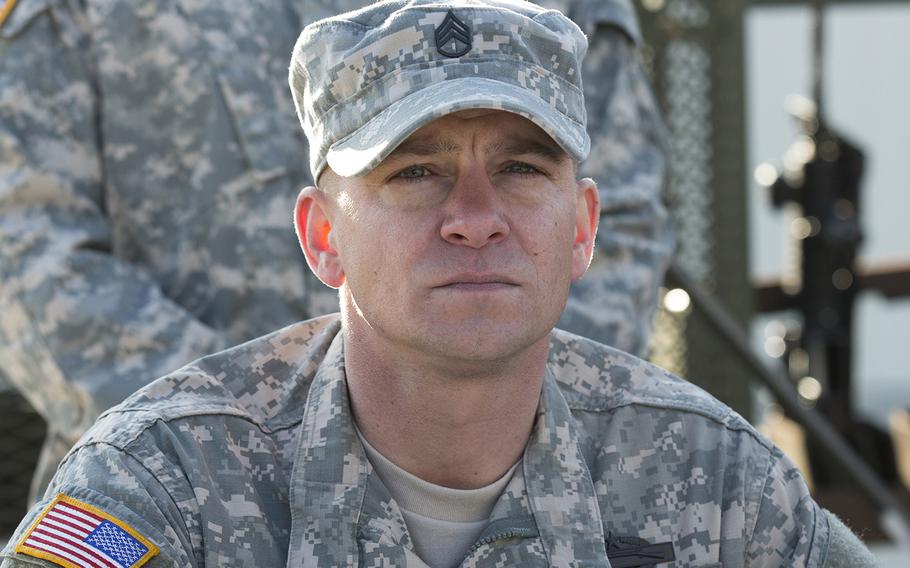 The real Adam Schumann, in his small role in "Thank You for Your Service." (Francois Duhamel/DreamWorks Pictures)

WASHINGTON — Ten years ago, when journalist David Finkel approached Army Staff Sgt. Adam Schumann on his last day in Iraq, Schumann didn’t anticipate his life would be chronicled in two books, and he couldn’t imagine the story would play out in a major motion picture.

But that’s what happened.

“Thank You For Your Service” — written and directed by “American Sniper” screenwriter Jason Hall — depicts Schumann (played by Miles Teller) and other, real-life soldiers with the 1st Infantry Division. The movie, opening Friday, portrays their struggles with traumatic brain injury, post-traumatic stress disorder, depression and suicidal thoughts following their return from Iraq to Fort Riley, Kan.

At first, Schumann didn’t want to speak with Finkel, he said. He felt a similar uncertainty when Hall brought him the idea of a movie based on one of Finkel’s books.

“I was so hesitant,” Schumann said. “But part of me was like, ‘If I can get this out there – if I can open up – maybe someone will go get help. Someone could read this or their spouse could and maybe they’d get help and maybe they wouldn’t commit suicide.’”

Hall wanted the movie to start a conversation about mental health care for veterans, but he mostly hopes to give the public a better understanding of veterans’ experiences, he said.

“As a society I hope we can come to understand the impact of the experiences these guys had and how it continues to reverberate through their lives,” Hall said. “It’s a heavy load we’re asking them to carry. They come home and we don’t unburden them of it; we just thank them for carrying it. And it’s time we took some of that and carried it alongside them.”

Obstacles to care Adam Schumann was on his third deployment in 2007 when he was diagnosed with post-traumatic stress disorder and sent home. At the time, he felt responsible for the death of Sgt. 1st Class James Doster, who had taken Schumann’s place on a mission the day he was killed.

The movie follows Schumann’s challenges reintegrating into the role of husband and father, and the barriers – emotional and bureaucratic – that prevented him from getting mental health care.

Other soldiers in the movie also struggled. Tausolo Aieti, played by actor Beulah Koale, experienced flashbacks to the day his Humvee was hit by a bomb and was depicted in the movie using ecstasy to self-medicate.

Scenes set at the Department of Veterans Affairs hospital in Topeka, Kan., attempted to illustrate past and ongoing issues with mental health care access within the VA system. Their treatment was delayed by red tape, and in one scene, a mental health professional saw Aieti over her lunch break.

VA officials, including Secretary David Shulkin, screened the movie. Shulkin mentioned it briefly Tuesday during his testimony before the House Committee on Veterans’ Affairs in response to a question about increasing suicide-prevention efforts for servicemembers transitioning out of the military.

Shulkin said the movie adeptly highlighted the months after leaving the military as high-risk, and he promised new initiatives to reach those servicemembers.

Heather Kelly, director of military and veterans health policy with the American Psychological Association, said many people would be able to recognize some of the experiences the movie depicts, including irritability, aggression and feelings of guilt and isolation. Like Schumann, she’s hopeful it will prompt some to seek help.

“My greatest hope is that the film does indeed encourage veterans and anyone else in distress to seek help,” Kelly said. “We know that treatment exists and is effective in treating PTSD. We also know that military personnel and veterans listen to their buddies and their family members, who are most often the most important factors in encouraging someone to get help.”

Making a difference Before filming, Teller met with Schumann in Minot, N.D., where Schumann lives with his family, and they talked about Schumann’s experiences in Iraq and what happened after he returned.

“You know the movie is going to affect Adam for the rest of his life – that’s just how it is – so I certainly felt an obligation to him,” Teller said. “He allowed a director in Hollywood to make a movie about his life. It’s a vulnerable position. I wanted to get it right.”

Schumann agreed to lend his life story to print and film because he wanted at least one person to hear the message and seek treatment – and he now knows that happened.

In 2013, Schumann went to the Pathway Home in California, where he was treated for PTSD. Later, when he was a peer counselor at the center, one young veteran told him “thank you.” The veteran’s wife had read the book and urged him to get help.

“He said, ‘I wouldn’t have been here otherwise, and I probably would’ve offed myself,’” Schumann said. “That’s all I needed, right there. That’s all I ever needed from any of this.”