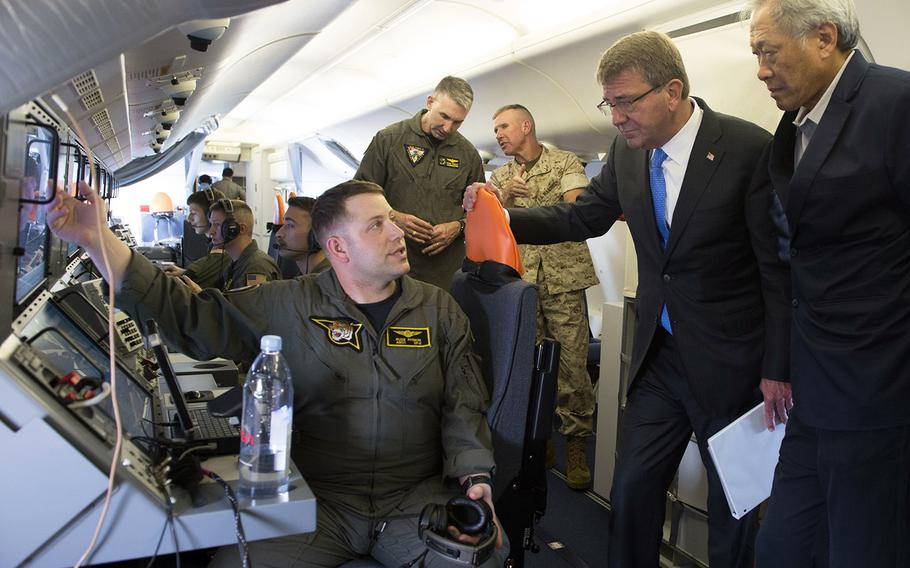 Secretary of Defense Ash Carter and Singapore Minister of Defence Minister NG Eng Hen are briefed on the capabilities of a P-8 during a flight over Singapore and the Strait of Malacca, June 3, 2016. (Tim D. Godbee/U.S. Navy)

Secretary of Defense Ash Carter and Singapore Minister of Defence Minister NG Eng Hen are briefed on the capabilities of a P-8 during a flight over Singapore and the Strait of Malacca, June 3, 2016. (Tim D. Godbee/U.S. Navy) 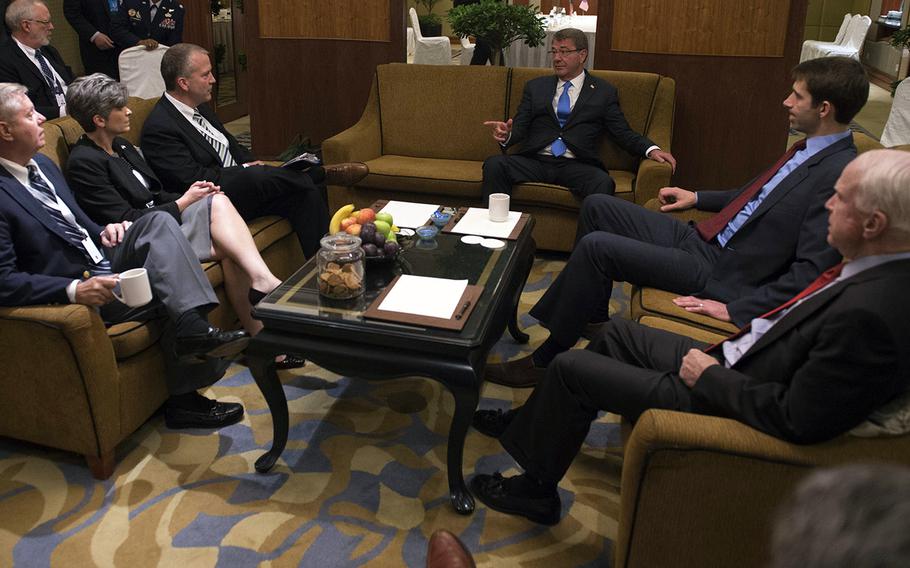 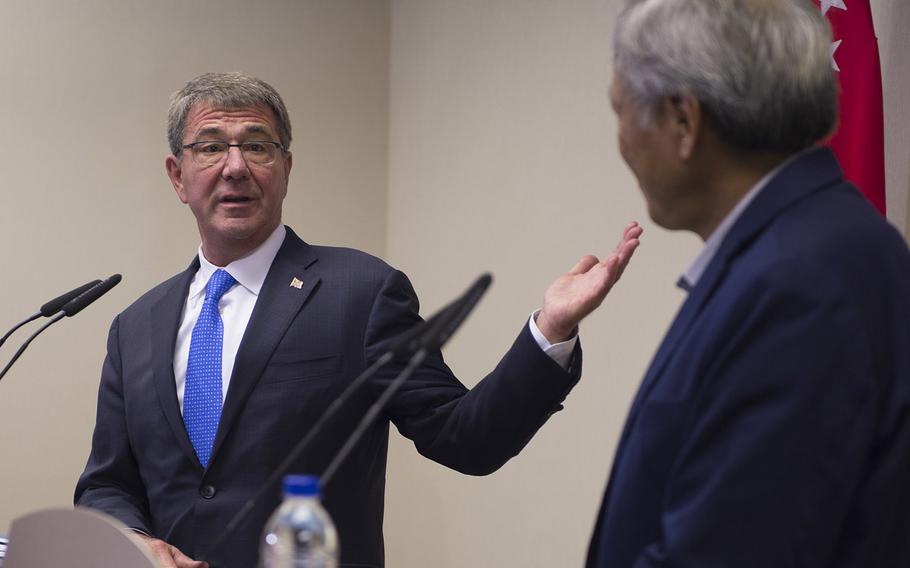 SINGAPORE -- China’s military buildup in the South China Sea dominated the first day of a key Asian security summit Friday, with U.S. partners trying to strike a balance between challenging the Chinese and working with them in what some see as a new reality in the region.

“I believe that if we look at everything from the standout of conflict we will never be able to see a way out,” Thailand Prime Minister Prayuth Chan-ocha said in the keynote address at the three-day Shangri-La Dialogue.

“If we focus solely on [territorial water] borders, some of which are still in dispute, then again we will never find a way out,” he said.

U.S. Secretary of Defense Ash Carter joined 20 regional defense ministers for the conference. Carter spent the early part of the day meeting with his Singaporean counterpart, defense minister Ng Eng Hen. The two defense chiefs took a flight on a U.S. P-8 Poseidon surveillance plane over the Strait of Malacca, one of the major transit points for global trade between the Pacific and the Indian Ocean.

In a news conference following the flight, some of the new strategic reality for the region surfaced in the defense minister’s remarks. Ng said for the last seven decades U.S. military power has provided stability in the Asia Pacific, and “at least for the foreseeable future [the U.S.] will continue to be a global power.”

“At the same time we recognize that situations change,” he said. “China is rising. All of us agree it is not a zero sum game. There is no question of containment. The question is, how do you accommodate the security architecture of both a resident power and a rising poser?”

While the Singapore defense minister said he was grateful for their close U.S. ties, he was reluctant to say whether Singapore would conduct joint patrols with the U.S. through the South China Sea.

Carter said in the future, the U.S. and its regional partners should focus on greater cooperation and inclusion, such as encouraging China to participate in joint military exercises. Carter will be addressing the conference Saturday.

Not all of the countries, however, were enthusiastic about compromise and overtures to China because of the pace of Chinese military buildup in the South China Sea.

Over the last year, China has stationed fighter aircraft and surface-to-air missiles at some of the artificial islands it has developed on reefs in the South China Sea.

During a question-and-answer session, a South Korean officer challenged Prayuth’s suggestion that the Asian nations should focus more on security issues that China could cooperate in, such as counterterrorism.

“The biggest threat to equilibrium in this region is China’s growing military footprint in the South China Sea,” the officer said. At the dinner, Carter met briefly and shook hands with the highest-ranking Chinese official to attend, Adm. Sun Jianguo, deputy chief of the Joint Staff Department.

The senators were skeptical of moving away from what they see as a containment strategy against Beijing in the South China Sea. They questioned whether including China in joint military exercises amounted to rewarding aggression.

“We should reward their behavior?” McCain quipped. “After all, they’ve been so cooperative in so many areas. Maybe we ought to invite them on board all of our ships.”