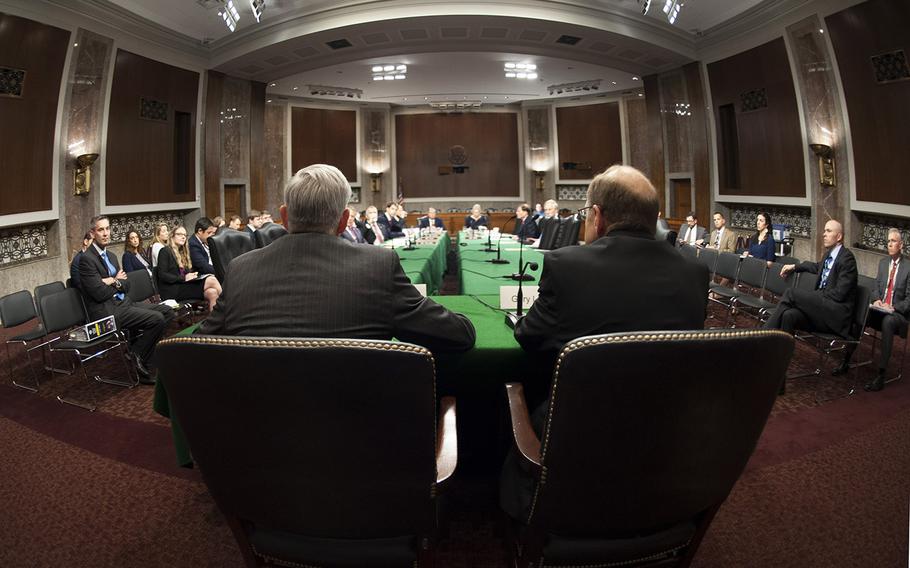 The Senate Armed Services Committee is embracing some Tricare fee increases proposed by the Obama administration, particularly for working-age retirees and their families. But it links those fee hikes to some surprising and long-overdue improvements in patient access and quality of care.

This is a far different and seemingly less strained approach than adopted by the House, which would delay most Tricare fee increases for a generation so they affect only people who enter the military after 2017 and begin to retire 20 or more years later.

On Tricare fees alone, military beneficiaries almost certainly would prefer that the House provisions prevail when a conference committee meets to iron out differences in the two versions of the fiscal 2017 defense authorization bill. But Democrats charge that the House only was able to defer hard decisions on military compensation by voting to fund just seven months of Iraq and Afghanistan war operations next year.

The threat of a presidential veto if the House budget blueprint prevails, and the attraction of Senate initiatives to expand patient access, seem to give the Senate’s approach to reform better odds of becoming law, though the outcome isn’t near certain.

Steve Strobridge, director of government relations for Military Officers Association of America, said MOAA opposes the Tricare fee increases but the Senate committee does deserve credit for following through on a promise to link them to concrete steps to improve care access and care quality.

Here are highlights of what senators have endorsed:

Tricare for Life: No fee increases for disabled retirees or for retirees and family members age 65 and older who rely on Tricare for Life, the military’s prized supplement to Medicare coverage.

Tricare Prime: The enrollment fee to use military managed care would be raised only for non-disabled retirees under age 65 and their families. For family coverage, retirees would pay $700 a year versus the current $565. Individual retirees would pay $350, up from $282.

Tricare Choice (Standard): Tricare Standard, the military fee-for-service insurance option, would see a name change, to Tricare Choice. This would underscore that users get to pick their providers. But that freedom to choose would become more costly. Active-duty family members or retirees and families would pay a first-ever annual enrollment fee. Senators rejected the administration’s call for the fee in fiscal 2018 to be set at $450 for individuals and $900 for families. It opted for a lower fee to start, with a climb to $450/$900 over five years.

Tricare Supplemental: Working spouses and military retirees would be offered a new lower-cost Choice option if they have alternative health insurance through civilian employers. Tricare Supplemental would cover costs that alternative insurance wouldn’t pay. And so beneficiaries would pay only half of the annual enrollment fee of full Choice coverage.

Outpatient cost-shares: The Senate bill largely embraces the administration’s call to replace existing cost-shares for Choice (Standard) with flat cost-shares for active-duty family members and retirees who use health care providers outside the network. The aim is to incentivize patients to use Tricare network contractors and base facilities more efficiently.

Pharmacy co-payments: The bill largely accepts the administration’s plan to phase in higher co-pays for off-base pharmacy benefits to spur greater use of generic drugs and mail order. The administration wanted co-pays for brand-name drugs at retail outlets or by mail order to climb from $24 this year to $46 by 2026. Instead, co-pays for generic drugs at retail would stay at $10 through 2018 and then climb to $14 by 2025. Generic drugs filled by mail order would have no co-pays through 2019, but rise thereafter to reach $14 by 2025.

Brand names not on Tricare’s drug formulary would be unavailable at retail outlets. Through mail order, non-formulary brand drugs would cost beneficiaries $54 per prescription in 2017, and climb to $92 by 2026. Prescriptions would continue to be filled on base at no charge.

Health fee indexing: Senators reject the administration’s call to index Tricare fees and co-pays to the annual rise in health care costs as measured by the National Health Expenditures (NHE) index. They found a different index to use that that should keep fee increases somewhere between the NHE index and annual retiree cost-of-living adjustments.

Commercial Insurance for reservists: DOD would have authority to test a program to offer drilling Guard and Reserve members access to the commercial health insurance plans for federal civilian employees. The benefits and premiums might be more attractive than those offered under the Tricare Reserve Select program, which would not be changed.

Improved dental/vision coverage: Military retirees would be allowed to enroll in the same dental and vision insurance plans offered to federal civilian retirees. The dental benefits, in particular, are seen as an improvement over the plan now offered to military retirees.

Value-based co-payments: DOD would gain authority to lower beneficiary co-pays on health services and drugs critical to health care outcomes, and to raise them elsewhere. This should encourage wiser choices in use of health resources, replacing a one-size-fits-all approach to fees.

No-show appointment fees: Beneficiaries would be charged a “no-show” fee if they fail to appear for scheduled appointments at military treatment facilities, a move to curb current widespread abuse that limits patient access to care and leads to system-wide inefficiencies.

Telemedicine expansion: The health care system would be required to offer a full range of telehealth services to military beneficiaries.