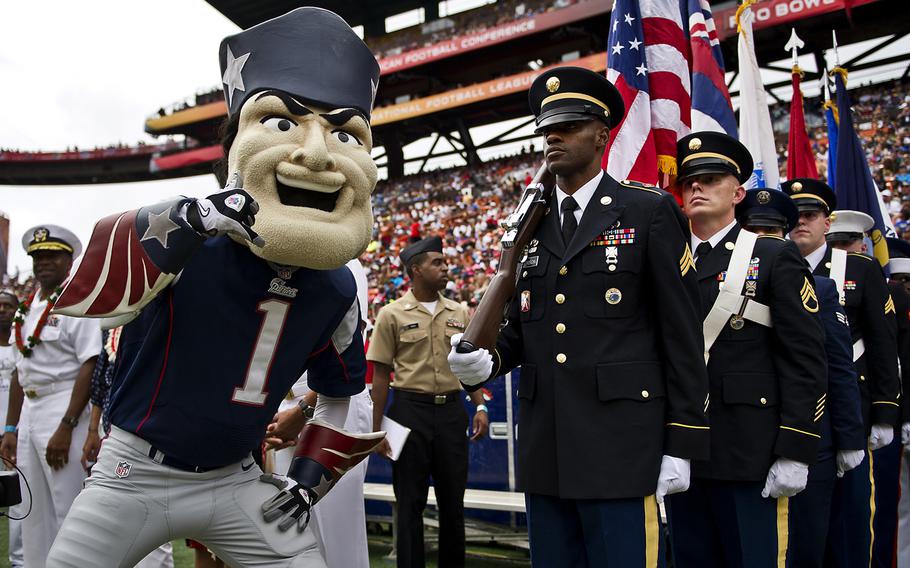 "Pat the Patriot," The New England Patriots mascot, poses for a photo with a joint service color guard prior to the beginning of the 2013 National Football League Pro Bowl. Several hundred service members assigned to bases throughout Hawaii were honored during the 2013 Pro Bowl opening ceremonies and halftime show. (Michael R. Holzworth/U.S. Air Force)

WASHINGTON — An Arizona senator says the Pentagon is holding up his investigation into its sports sponsorships that paid NFL teams millions of dollars for game-time troop tributes.

Republican Sen. Jeff Flake requested documentation of all payments, but that information will not be available until March due to ongoing probes, according to the acting undersecretary in charge of Defense Department Personnel and Readiness.

The military services, including the National Guard, and the Government Accountability Office are investigating sports sponsorships after revelations in May that various teams in the National Football League were paid nearly $7 million to honor troops’ service.

“It is troubling, given that this topic has been the subject of considerable attention nationwide, that nearly two months after the original request for information, the Department of Defense finally responded and yet provided no additional information beyond what was already uncovered and available in the public domain,” Flake wrote in a letter sent to the DOD on Monday.

In one example, the New York Jets received up to $115,000 to recognize a servicemember or veteran as a “hometown hero” at each of its eight home games. The team would project their faces on the scoreboard and allow them to watch the game from a VIP box with family members in what “fans may have assumed were genuine gestures to thank and recognize soldiers,” according to Flake.

He called the lack of details from the DOD “insufficient and wholly unsatisfactory,” and wrote that his staff was able to find more information by searching public government websites.

Under Secretary Brad Carson told Flake last week that he could not provide all of the information that was requested, including the work statements from all sports sponsorship contracts since 2009 and details on each NFL salute paid by the military, according to a letter provided by the senator.

“The department agrees that using valuable recruiting resources to pay outside entities to honor our brave servicemen and women is a concerning practice that requires scrutiny,” Carson wrote.

But such sponsorships remain a valuable recruiting tool as lower unemployment and more college opportunities draw young Americans away from service, the DOD wrote in a response to Flake’s inquiry.

Carson said the National Guard has launched an investigation and he directed all the services to look into the pro-football payments and come up with appropriate policies to manage sponsorship contracts.

“These reviews are projected to be completed in March of 2016,” he wrote to Flake. “Once the data from these reviews are collected and analyzed, we will provide you with additional information in order to respond more fully to the questions you posed in your letter.”