Senate to vote on future of A-10 aircraft 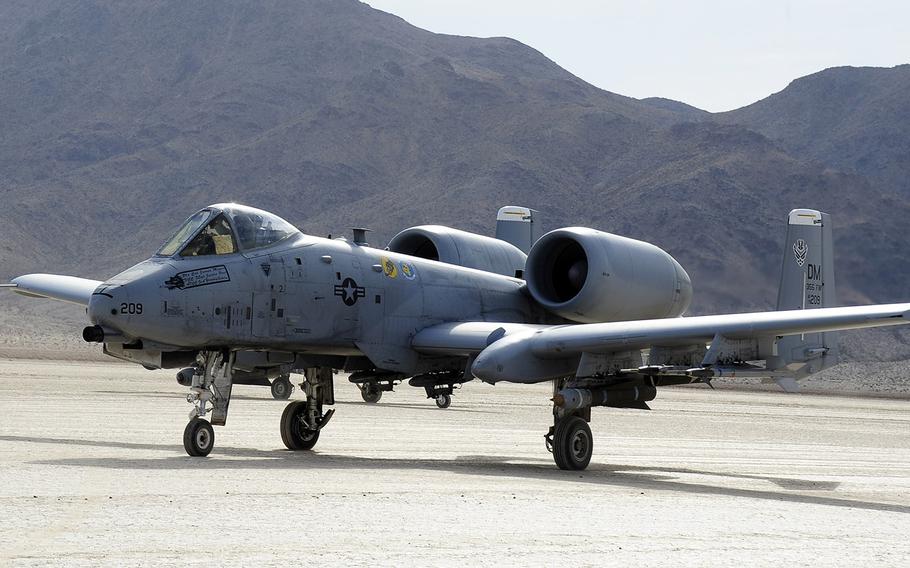 WASHINGTON – A Senate vote Tuesday could be key for the future of the A-10 Thunderbolt, which the Air Force wants to retire over the objections of infantry troops and lawmakers.

An annual defense policy bill scheduled for a vote by Senate Republican leadership – and facing staunch Democratic opposition — would require the service to maintain 171 of the A-10s and bar it from spending any money on retirement efforts over the coming year.

The House passed the measure Thursday but Democrats rallied against it. Republicans were unable to get enough votes to protect the bill from a threatened White House veto.

The Air Force hopes to save money by retiring the 1970s-era aircraft and make way for advanced aircraft such as the F-35 Joint Strike Fighter, which remains in development. But supporters of the so-called Warthogs, especially former A-10 pilot Rep. Martha McSally, R-Ariz., said there are no good replacements for now and phasing it out could risk U.S. security and lives on the battlefield.

“These aircraft are critical to our local economy as well as our current military efforts in the Middle East and Eastern Europe, where A-10s are deployed to train with our NATO allies and deter Russian aggression,” McSally said in a released statement. “We absolutely cannot afford to see these capabilities sidelined prematurely, and I will continue to work tirelessly to prevent that.”

McSally, a retired colonel and pilot who flew A-10 missions over Iraq before the 2003 invasion, sponsored the sections of the defense bill, called the National Defense Authorization Act, that were passed by the House on Thursday. Her district includes Davis-Monthan Air Force Base, where much of the Air Force fleet is based.

Under the proposal, the Air Force also would be required to provide a study to Congress on the effectiveness of any alternatives to the close-air-support stalwart, known for its powerful nose cannon.

The measure must now pass the Senate as part of the massive NDAA and will likely be pulled into an ongoing fight between Republicans and Democrats over government spending. Majority Leader Mitch McConnell, R-Ky., cued up the NDAA for a possible vote Tuesday.

The battle over the bill unfolded in the House this week after it was unveiled and then voted on just two days later. President Barack Obama had warned he will veto it and Democrats fell in behind that opposition, saying Republicans are trying to circumvent spending limits on defense while doing nothing to lift caps on spending for other domestic programs.

The bill would put more than $38 billion for daily military operations into an emergency war fund called Overseas Contingency Operations, which is exempt from the spending limits but would not give the military the long-term spending stability it prefers.

Blocking retirement of the A-10 was among the spending issues raised by Democratic leadership.