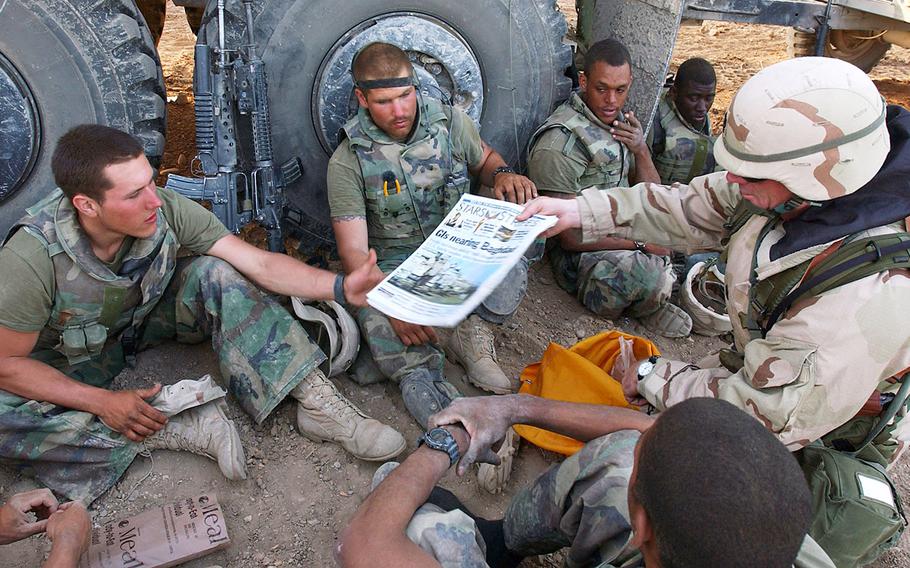 WASHINGTON — The draft of the 2021 National Defense Authorization Act adopted by the Senate Armed Services Committee would strip Stars and Stripes of its federal funding, according to Senate staffers.

The staffers spoke on condition of anonymity to confirm contents in the bill that have not yet been made public. Stars and Stripes receives about $8.7 million annually in operations and maintenance funds and about $6.9 million in contingency operations funds to support news reporting throughout the world.

The federal funding makes up about half of the news organization’s annual funds and pays to print and distribute newspapers to American troops deployed around the globe, including remote and often-dangerous locations such as Afghanistan, Iraq and Syria. The rest of the organization’s money comes from sales, subscriptions and advertising.

Congress must pass the NDAA each year to direct Pentagon budget policy. The Senate Armed Services Committee’s version was approved Thursday with a committee vote of 25-2. The spending plan approved $740.5 billion for the national security budget, of which the Pentagon would receive about $705.4 billion.

Sen. Tammy Duckworth, D-Ill., introduced an amendment to include funding for Stars and Stripes, one of the staffers said. The motion made by the former Army pilot and Iraq war veteran was ultimately not adopted. It was not clear Friday which committee members voted for or against that amendment, as the committee conducted its markups almost entirely in closed sessions.

“Every day, Stars and Stripes proves its value to deployed troops, families and civilians, with unique stories from American bases around the world — stories that wouldn’t be covered otherwise. I’m disappointed that the committee did not turn back the Pentagon’s move to stifle this independent journalism. For now, we look to the House to stand up for Stripes’ important mission of serving those who serve,” Gates said in a statement.

Stars and Stripes first appeared during the Civil War, and it has been continuously published since World War II. It produces daily newspapers for U.S. military troops across the world and a website, stripes.com, which is updated with news 24 hours seven days a week. Though it is part of the Pentagon’s Defense Media Agency, Stripes retains its editorial independence and is congressionally mandated to be governed by First Amendment principles.

Pentagon officials in February said money reallocated from Stars and Stripes would be invested in functions that they considered more critical for warfighting. Defense Secretary Mark Esper said funding Stripes was simply not a priority for the department.

“So, we trimmed the support for Stars and Stripes because we need to invest that money, as we did with many, many other programs, into higher-priority issues,” Esper said during a Feb. 13 news conference at NATO headquarters in Brussels.

Some lawmakers and former military officials were among those to voice support for Stars and Stripes after reports surfaced it could lose its federal funding.

Rep. Ruben Gallego, D-Ariz., a Marine veteran who fought in Iraq, tweeted support for the news organization and vowed to fight for it. “We need their reporting,” Navy veteran Rep. Gil Cisneros, D-Calif., added in a tweet.

Retired Navy Adm. James Stavridis, who served as U.S. European Command chief and NATO Supreme Allied Command from 2009 to 2013, said he read Stars and Stripes routinely during that command.

“It was an invaluable, unbiased, and highly professional source of information which was critical to me in my role overseeing U.S. military throughout Europe,” Stavridis wrote in an email.

The Society of Professional Journalists, a key journalism advocacy and education organization, also called for Stripes’ funding to be restored.

Cutting its funding, SPJ said, would be “a huge disservice to the men and women who serve our country” who rely on the physical newspaper in areas where they cannot access the internet.

The 2021 NDAA is far from becoming law and is not expected to be finalized until the fall. It must be passed by both chambers of Congress by Sept. 30, the end of the fiscal year, to provide the Pentagon an on-time budget.

The bill draft approved Thursday by the Senate Armed Services Committee must be considered by the full Senate. It is not clear when the upper chamber will consider the legislation.

Meanwhile, the lower chamber is only in the first steps of crafting its version of the bill. The House Armed Services Committee’s six subcommittees will begin marking up their portions of the NDAA draft on June 22, and the full committee is set to consider the bill on July 1.

A spokeswoman for House Armed Services Committee Chairman Adam Smith, D-Wash., declined Friday to provide any details about his version of the bill, saying it was not yet finalized.

A spokeswoman for the committee’s ranking Republican, Rep. Mac Thornberry of Texas, declined comment, referring questions to committee staffers, who did not immediately respond to questions.