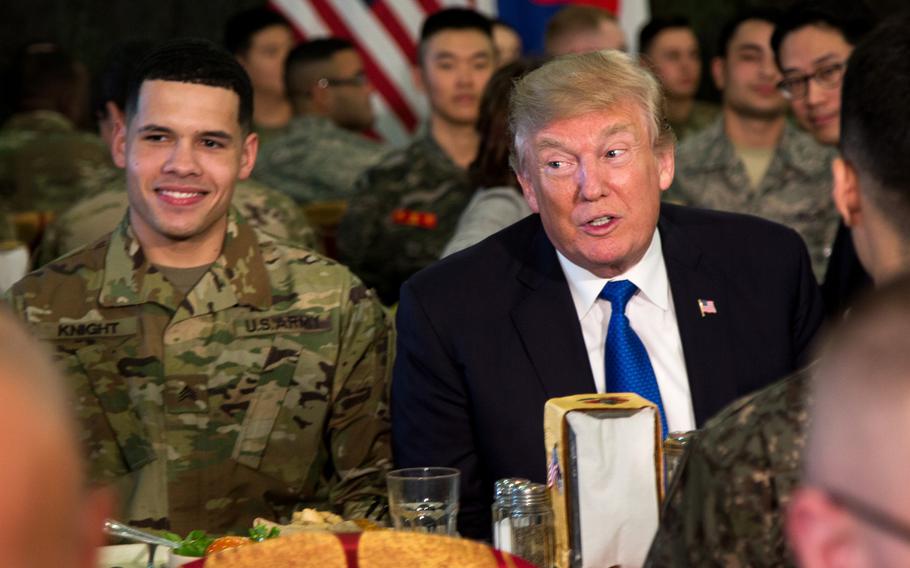 “President Trump should win the Nobel Peace Prize. The only thing we need is peace,” he said in remarks confirmed by the presidential office.

The deadline for peace prize nominations was Feb. 1, and it’s unclear whether Trump was among the candidates. The Norwegian Nobel Committee, which selects the winners, said last month that it had uncovered what appeared to be a forged nomination for Trump.

The matter was referred to Oslo police for investigation, according to media reports.

Trump is planning to hold his own summit with Kim in coming weeks.

The venue and date have not been announced, but the president on Monday raised the possibility of holding it in the border truce village where the inter-Korean summit took place.

“Numerous countries are being considered for the MEETING, but would Peace House/Freedom House, on the Border of North & South Korea, be a more Representative, Important and Lasting site than a third party country? Just asking!” he said in a tweet.

Moon is eager to maintain the momentum toward peace after he and Kim agreed to work toward the “complete denuclearization” of the divided peninsula and to end hostilities.

The two Koreas remain technically at war after their 1950-53 conflict ended in an armistice instead of a peace treaty.

One of Moon’s mentors, former President Kim Dae-jung, won the Nobel Peace Prize in 2000 for his so-called Sunshine Policy that led to the first inter-Korean summit that year with Kim Jong Un’s father.

Moon was responding Monday to a congratulatory message from Kim Dae-jung’s widow Lee Hee-ho, who said she believed Moon should get the peace prize. Instead, he said it should go to Trump, according to Reuters.

The winner of the annual Nobel Peace Prize recipient is announced in October. The opulent award ceremony is held Dec. 10, the anniversary of the 1896 death of the Swedish industrialist who created the prizes.

The committee received 329 candidates, 217 individuals and 112 organizations, according to the official website.

Their identity is kept secret for 50 years, but individuals making the nominations often reveal their choice.

The last sitting U.S. president to win the prize was Barack Obama in 2009, shortly after he was elected for his first term. That was a controversial choice because of the timing.

Republican lawmakers also have voiced support for the idea of giving the prize to Trump.

“We’re not there yet, but if this happens, President Trump deserves the Nobel Peace Prize,” he said.

The crowd at a rally held by Trump on Saturday in Michigan also began chanting “Nobel” when he mentioned his upcoming talks with North Korea.

The diplomatic push reversed months of heightened tensions during which Trump took a hard line, calling Kim “little rocket man” and threatening to unleash “fire and fury” and to “totally destroy” North Korea if forced to defend the United States and its allies.

Experts and officials say it’s too early to declare victory since past agreements have collapsed during the decades-long effort to persuade the North to abandon its nuclear ambitions.

The inter-Korean summit declaration didn’t include specific steps or timetables, setting the stage for potentially difficult negotiations with the United States.

Moon has consistently given Trump credit for the sudden about-face by Pyongyang in agreeing to talks earlier this year.

Trump also says the North is responding to his “maximum pressure” campaign of tightened international economic sanctions and diplomatic isolation.

Many experts say Kim appears to be feeling increased leverage after the North test-fired three intercontinental ballistic missiles and conducted its sixth and most powerful nuclear test last year.