‘Rug flops’ make for a colorful social event in Bahrain 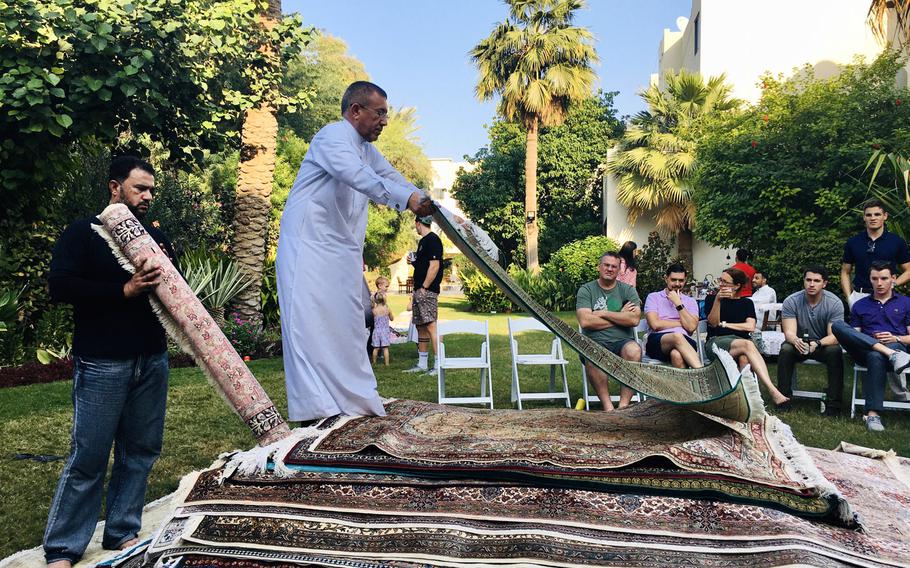 Buy Photo
Mustafa Ameen, from the Carpet House in Adliya, Bahrain, rolls out a carpet during a ''rug flop'' event hosted by U.S. Navy Cmdr. Joe Zerby and his wife, Jill. (Joshua Karsten/Stars and Stripes) 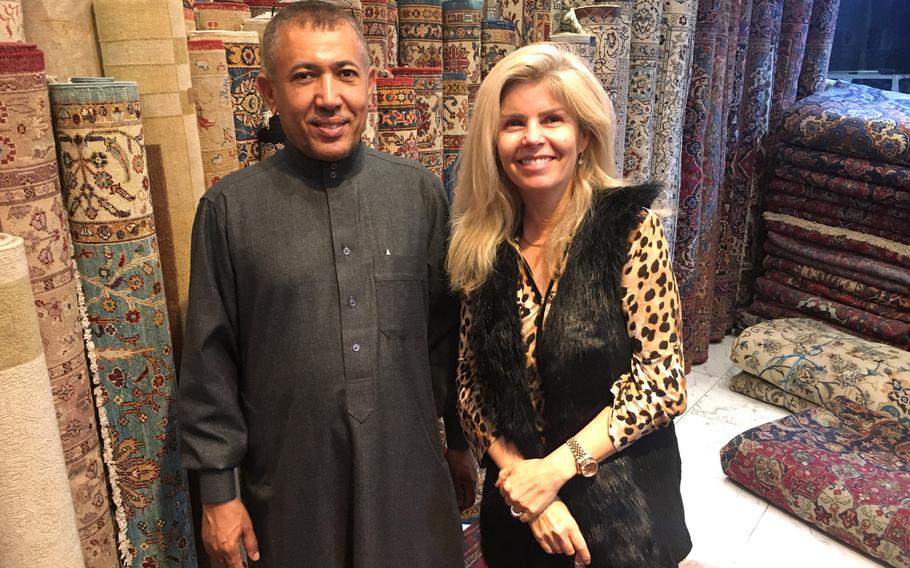 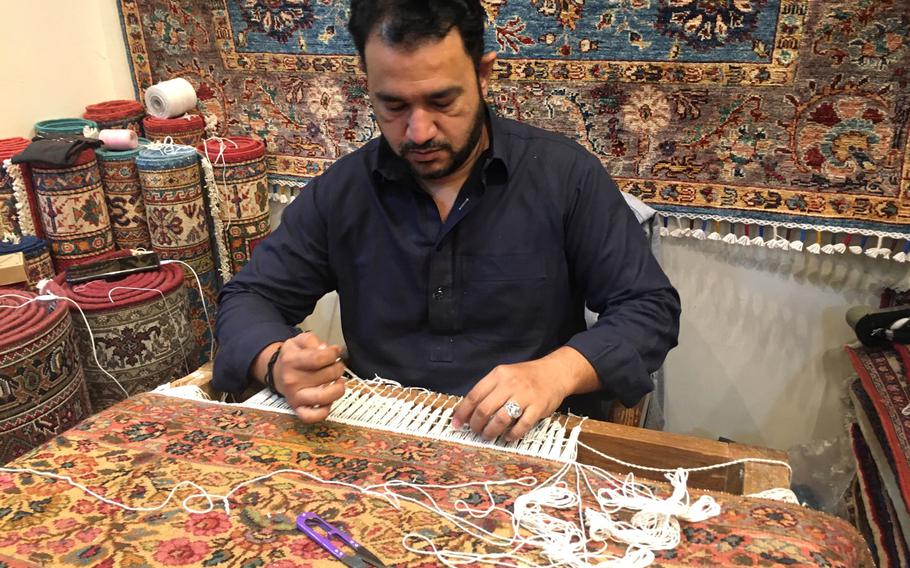 There’s nothing like a good old-fashioned “rug flop,” where carpet vendors literally roll out the red carpet for service members stationed in Bahrain.

But if red isn’t your carpet color, shop owners will keep them rolling until you see one you like, either in their store, or at your place for an afternoon of food, fun and a truckload of carpets.

Rug flops typically include a couple hours of socializing before participants circle around, as the host flops carpets one by one into a mound.

My first rug flop last year was a surreal experience. After a few oohs and ahhs, participants then negotiated prices — often cheaper than in the store — and broke out the credit cards. I couldn’t believe how much I enjoyed it.

As coronavirus restrictions slowly ease, rug flops are becoming an option again, though the outdoor versions are understandably more popular in the winter.

My first invite, prior to the pandemic, came from budding collectors Cmdr. Joe Zerby and his British wife, Jill, who have purchased more than a dozen carpets from host Mohammed Abdu Al-Omari, owner of Carpet House in Adliya.

Omari knew where each carpet came from and its value just by looking at the patterns and material. Persian, Afghan, Pakistani, Kashmiri, Kazakhstani, Turkish, the list goes on and on. But Omari said the value can be found in the details.

“It is very easy to know,” Omari explained. “Each area of Iran, for example, has their own design, own color.”

Omari shared tips and advice on the difference between handmade carpets — which have imperfections and knots on the back — to machine-woven carpets that are more symmetrical. A tribal carpet from Afghanistan, for example, could take up to eight months to complete and will often have no designer. A rug designed by a single family from Iran will have fewer imperfections, Omari said.

His most expensive carpet costs 6,000 Bahraini Dinar ($16,000) and he has many antique carpets more than a century old. Omari said Persian rugs can cost much more overseas depending on the location, quality and history, with some carpets being “made before Jesus.”

“Mohammed will take the time to teach you about the differences,” Joe Zerby said. “When you see this one is 600 BD and that one is 200 BD, he can explain why, instead of it just being like magic.”

The Zerbys regularly visited Omari’s store, where they sipped tea and looked at carpets “just for fun.”

“I’ve learned you cannot get rugs like this in America or the U.K. unless you’re paying thousands and thousands,” Jill Zerby said. “And the Americans do have a fascination for them; I don’t know why.”

After asking around, I learned that this phenomenon is growing in popularity for the military community, which Omari claims was his idea back in 1994.

“It started with an American guy” who came into Omari’s store with an idea to host a carpet education event for U.S. Navy sailors coming to Bahrain for a port visit. “He invited me to his house, and we brought food and he brought the drinks ... and he make it like a party.”

But just a few doors down from Omari is Oasis Carpet Centre, where shop owner Abdul Wahed Abdulla has been doing rug flops for three decades, also claiming to have started the trend out of his van in the earlier days of Naval Support Activity Bahrain, “when it was much smaller.”

“It started small and we called it ‘carpet party,’ ” Abdulla said. The word ‘rug’ is an American word, but the term “rug flop” soon caught on.

Although the origin is up for debate, Abdulla explained that he and other successful “rug floppers” continue to thrive with the military community because of trust, as “not all shop owners will give you a fair price.”

“It is this honest attitude and not focusing on the highest price that has gotten me more business over the years,” Abdulla said.

Honest price or not, some carpets can cost thousands, said former Bahrain community member and carpet aficionado Cmdr. Charles McKinney, currently serving at a NATO base in the Netherlands.

“Prepare yourself to be in a situation akin to any other situation which could be addictive,” McKinney said. “Especially if you attend a flop.”

McKinney recommended to set a rug aside and look at it again later, saying “you’ll be surprised how different it looks the second time around.” McKinney has purchased more than 15 carpets from Omari and other shops from multiple tours in Bahrain over his career.

“Flops are a great idea, especially for a community of friends and co-workers,” McKinney added. “They really are fun social events, and I applaud and give thanks to anyone who has ever hosted one.”

More than half of Abdulla and Omari’s business comes from Americans. The shop owners both showed off their proud collection of U.S. Navy command ball caps and coins that have been presented to them over the years.

If you want to see a flop, shop owners will take the time to show you as many carpets as you want in their stores, assuming current coronavirus restrictions permit it. They even offered me some tea and Arabic coffee at the time.

Abdulla said he had customers cancel rug flops at their homes over the past few months because of the pandemic, but that he’s ready to do them again with social distancing and other safety measures enforced.

Both Omari and Abdulla will take care of everything, including the food.

“But you need to buy the booze,” Omari joked.

DIRECTIONS: Shawarma Alley in Adliya. Take Awal Ave. west from the base. Pass the Grand Mosque through the intersection onto Bani Otbah Ave and the second left onto Osama Bin Aid Ave. (aka Shawarma Alley).

TIMES: Daily, 9 a.m. to 10 p.m.; call ahead if any coronavirus restrictions are in effect.