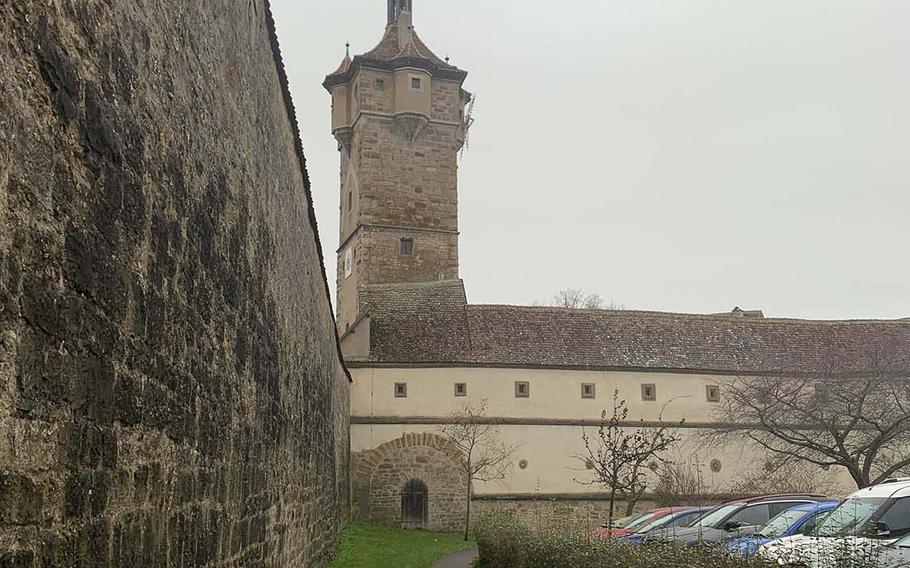 The fortified wall around Rothenburg, Germany. (Immanuel Johnson/Stars and Stripes)

The fortified wall around Rothenburg, Germany. (Immanuel Johnson/Stars and Stripes) 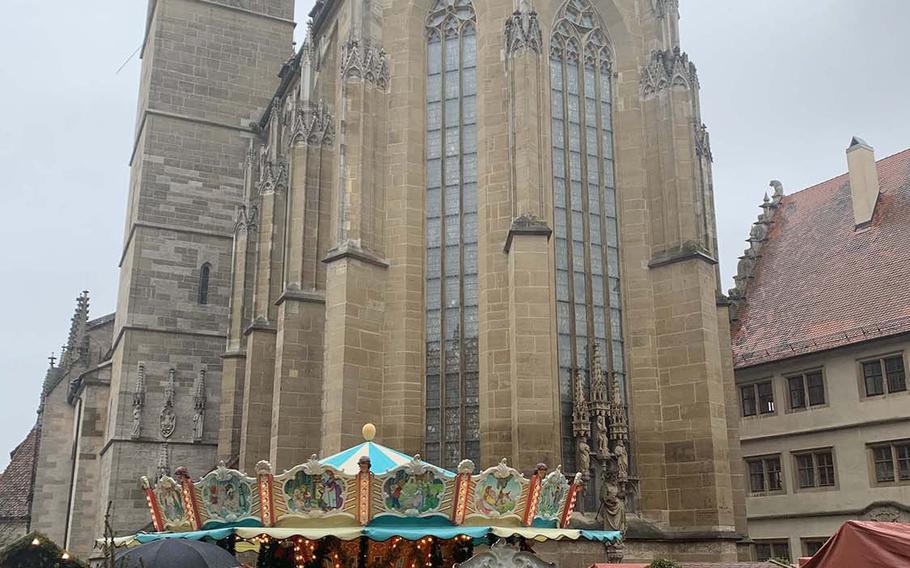 St. James's Church in Rothenburg is considered to be the most significant church in the town. The Christmas market, complete with a carousel, is right in front of the church. (Immanuel Johnson/Stars and Stripes) 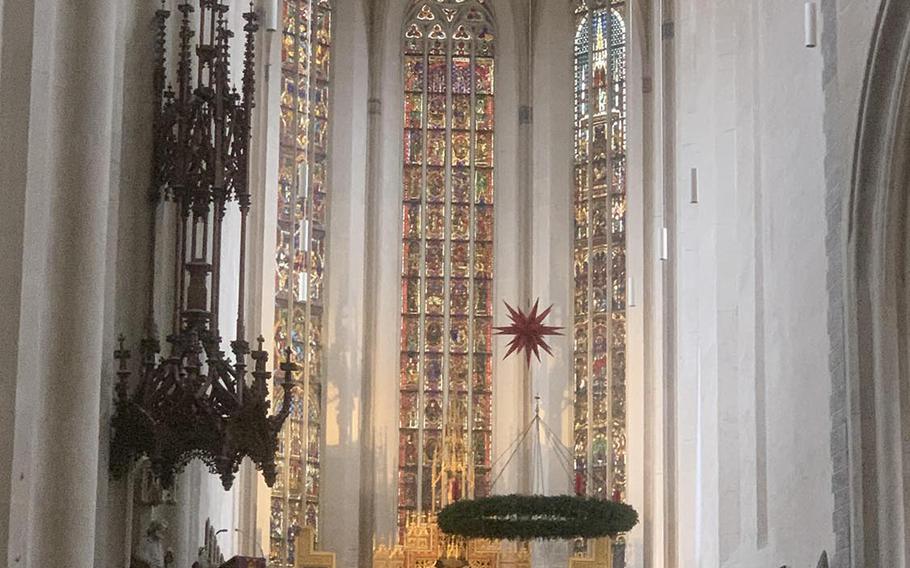 A view of the main altar, depicting the 12 apostles, inside St. James's Church in Rothenburg, Germany. The church was built over a 100-year period during the 14th and 15th centuries. (Immanuel Johnson/Stars and Stripes) 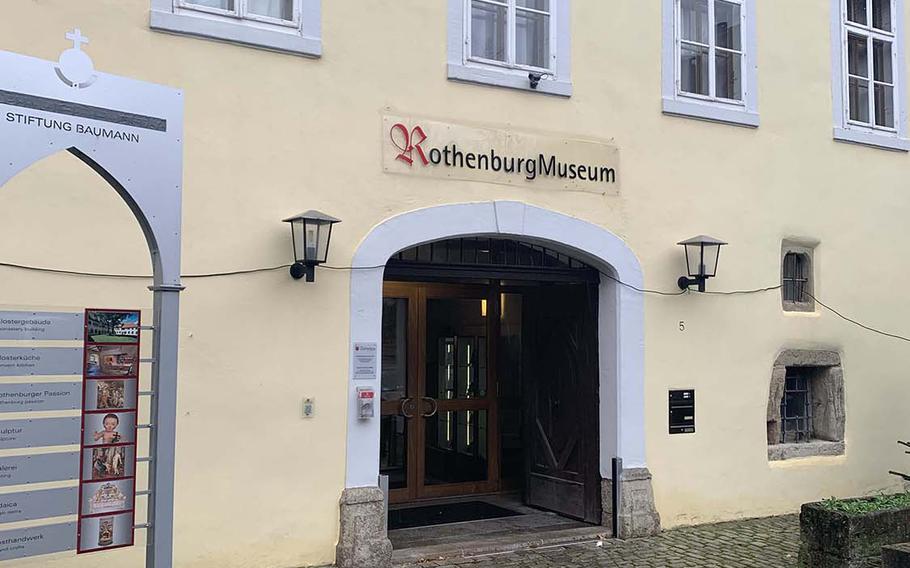 The entrance of the Rothenburg Museum, also known as the Imperial City Museum, at Rothenburg, Germany. Built in an old monastery, the museum houses Germany's oldest preserved monastery kitchen, dating from the 13th century. (Immanuel Johnson/Stars and Stripes) 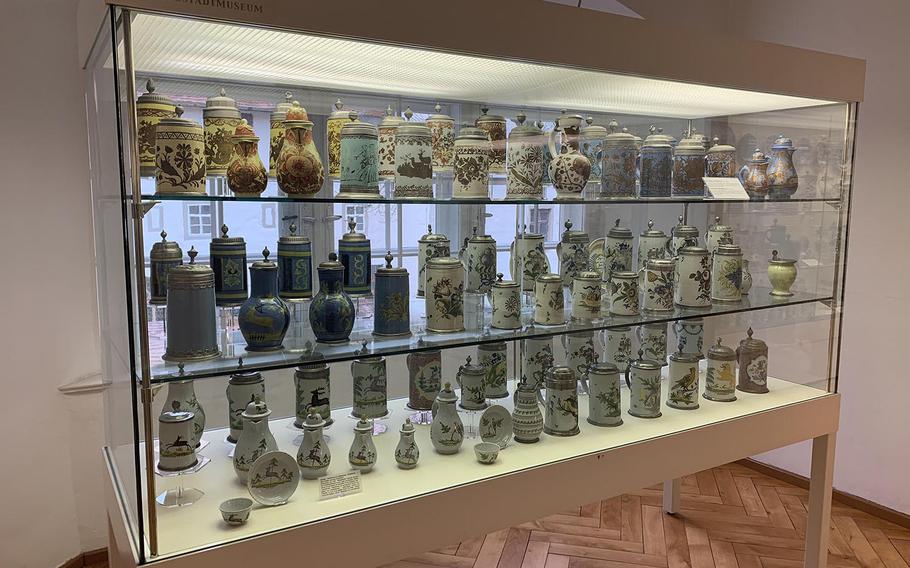 One of the beer stein exhibits inside the Imperial City Museum at Rothenburg, Germany, December 15, 2019. (Immanuel Johnson/Stars and Stripes) 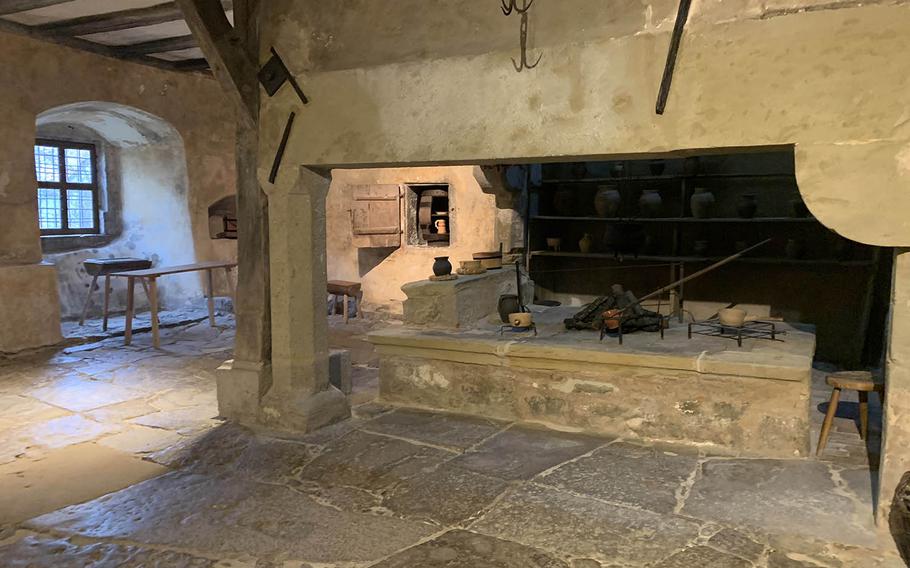 Rothenburg may be a quiet town today, but enclosed in its medieval walls is a wealth of sometimes tumultuous history.

About a three-minute walk from the city center is the Rothenburg Museum, also known as the Imperial City Museum.

Housed in a former monastery building, the museum includes Germany’s oldest preserved monastery kitchen, dating from the 13th century, a Judaica collection reflecting a bygone time when 10% of the town’s population was Jewish, and one of the largest collections of old weapons in Europe, including everything from knights’ armor to muskets.

Right in the center of town is St. James’s Church. Considered the most important church in Rothenburg, it was completed in 1485 after more than a century of construction. The church’s narrow stained-glass windows, its main altar depicting the 12 apostles, and the wooden altar showing the Last Supper are among the features that draw not just pilgrims but also crowds from around the world.

The town’s Christmas market was set up right in front of St. James’s church when I visited in December. Stands offered a seemingly never-ending supply of Gluehwein, as well as crepes, Christmas ornaments and Nativity scenes available for purchase. There was also a carousel for younger visitors.

Another museum, the Medieval Crime and Justice Museum, has a display of old instruments of torture and a pillory out front that’s perfect for selfies.

If pillories aren’t your thing, head to the Ploenlein — literally “small square by a fountain” — and take a selfie in front of the crooked house, which is said to be the most popular place to take souvenir pictures in Rothenburg.

DIRECTIONS: Rothenburg is just over a scenic two-hour drive away from the Grafenwoehr and Vilseck area.

Rothenburg Museum: Admission is 6 euros for adults, 5 euros for groups with a minimum of 10 people, students, handicapped and retirees; 4 euros for youths 6-18 years old. You have to pay 5 euros to get a permit to take pictures inside the museum.