Report: Marine accidentally killed by bulldozer as he slept 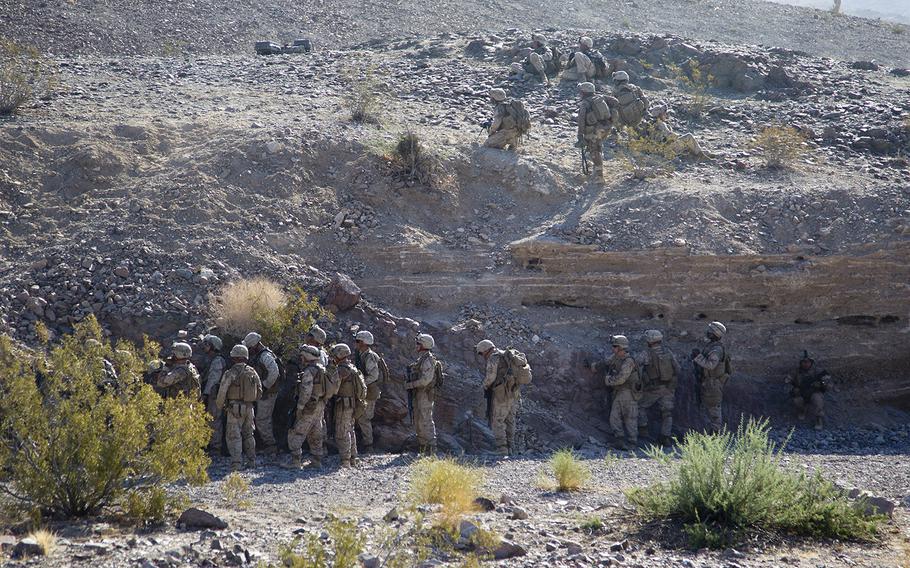 U.S. Marines train at Marine Corps Air Ground Combat Center in Twentynine Palms, Calif., in July 2013. A NCIS probe has concluded that a 20-year-old Marine who died there in March during pre-deployment training was killed by a bulldozer as he slept in a hand-dug foxhole. (Matthew Allen/Courtesy of the U.S. Marine Corps)

SAN DIEGO — A 20-year-old Marine who died in March during pre-deployment training at Marine Corps Air Ground Combat Center, Twentynine Palms, was killed by a bulldozer as he slept in a hand-dug foxhole, a Naval Criminal Investigative Service investigation concluded.

Pfc. Casey James Holmes, of Chico, Calif., was participating in a training exercise with his Hawaii-based unit, 3rd Battalion, 3rd Marine Regiment, when the accident happened.

The Chico Enterprise-Record obtained the NCIS report on Holmes’ death after filing three Freedom of Information Act requests, then shared the report with The Desert Sun, which posted the documents online.

Holmes and other Marines were in place in “skirmish holes” interspersed with Assault Amphibious Vehicles along a defensive line on the evening of March 11, 2013, according to the report. Holmes’ skirmish hole was about 15 meters to the left of an AAV.

Shortly before 11 p.m., two bulldozer operators were told to move to a new area to create a defensive obstacle. The lead driver became lost while driving in the dark, and said he did not see any chemical or vehicle lights that would indicate Marines were in the area.

Marines with Holmes’ unit spotted the up-armored bulldozer heading toward the AAV near Holmes and tried to wave off the driver, witnesses told investigators.

The driver told investigators he saw the AAV and the Marines waving as he got close, but he did not see Holmes asleep in his sleeping bag until after he had stopped the vehicle on top of him, according to the report.

The hole was not deep enough to protect Holmes from the bulldozer’s track, witnesses said.

A corpsman and other medical professionals tried to save Holmes’ life, but were unable to revive him, witnesses said. He was pronounced dead just after 6 a.m. March 12, the report says.

Investigators do not believe alcohol or drugs were involved, and concluded the incident was an accident.