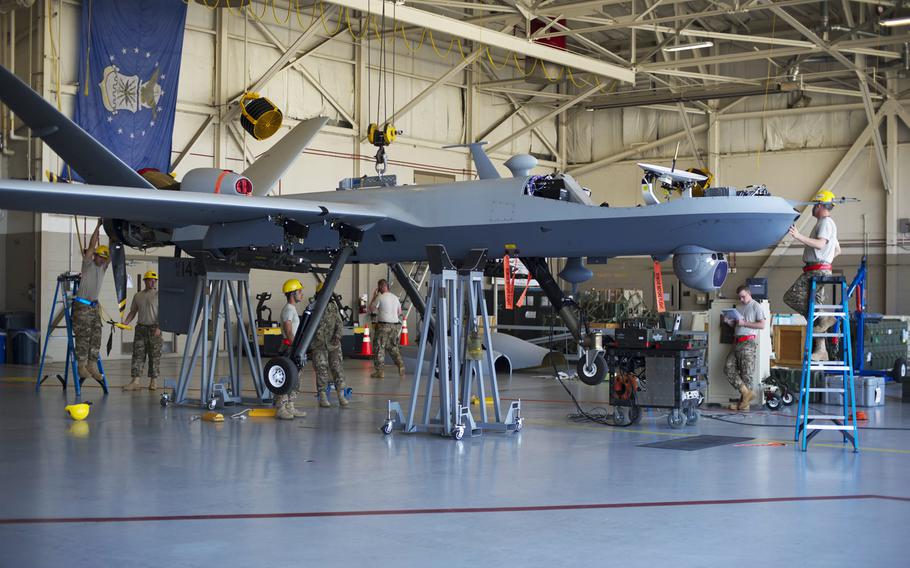 WASHINGTON — The head of Air Combat Command recently warned the Air Force Chief of Staff that troops who conduct unmanned air operations are overstretched and can’t meet the Pentagon’s growing demand for drones indefinitely, according to a report this week.

In a memo obtained by the Daily Beast, Gen. Herbert “Hawk” Carlisle reportedly told Air Force Chief of Staff Gen. Mark Welsh that the Air Force’s manning woes — a result of fewer airmen coming in and more leaving the program — require it to ask the Pentagon to ease off on a proposal for 65 unmanned combat air patrols, or CAPs. Each CAP generally includes four Predator or Reaper aircraft.

“ACC believes we are about to see a perfect storm of increased COCOM [Combatant Commander] demand, accession reductions, and outflow increases that will damage the readiness and combat capability of the MQ-1/9 enterprise for years to come,” Carlisle wrote. “I am extremely concerned.”

Remotely piloted aircraft, as the Air Force calls them, are at the center of the fight against Islamic State militants in the Middle East and are important surveillance and strike platforms in battles against extremists in Africa, Afghanistan and elsewhere.

Despite the Air Force’s proposal to cut the number of CAPs to 62, planners in the Pentagon’s Joint Staff continue to want to “circumvent normal processes” and supply 65 patrols, Carlisle wrote.

“This simply is not an option for ACC to source indeterminately,” he wrote.

The Air Force aims for 10 crew members per combat air patrol, but operational demands have forced the ratio to less than 8 to 1, violating a “red line” for manning, Carlisle said. To help fill the crews, the Air Force has been pulling instructors out of schools where drone operators and crews are trained, narrowing the pipeline supplying new operators.

As a result, said an official quoted anonymously in the Daily Beast, the drone force is “at the breaking point, and it has been for a long time. What’s different now is that the Band-Aid fixes are no longer working.”

Air Force officials at Air Combat Command and at the Pentagon told Stars and Stripes they could not comment on leaked documents. But a spokesman said the strain of providing enough drones to meet the high demand has long been an issue.

“In order to meet combatant commander requirements, and in response to SECDEF direction, the Air Force surged MQ-1/9 CAPs nine times in the last eight years, and has successfully sustained those operations to date,” Air Force spokesman Lt. Col. Chris Karns said in an email to Stars and Stripes. “We’re mindful of the toll this has had on the force and recognize Airmen remain the service’s most vital resource. Continued sustainment of surge operations will have potential long-term impacts on training, safety, retention, manning, sustainment, and combat capability.”