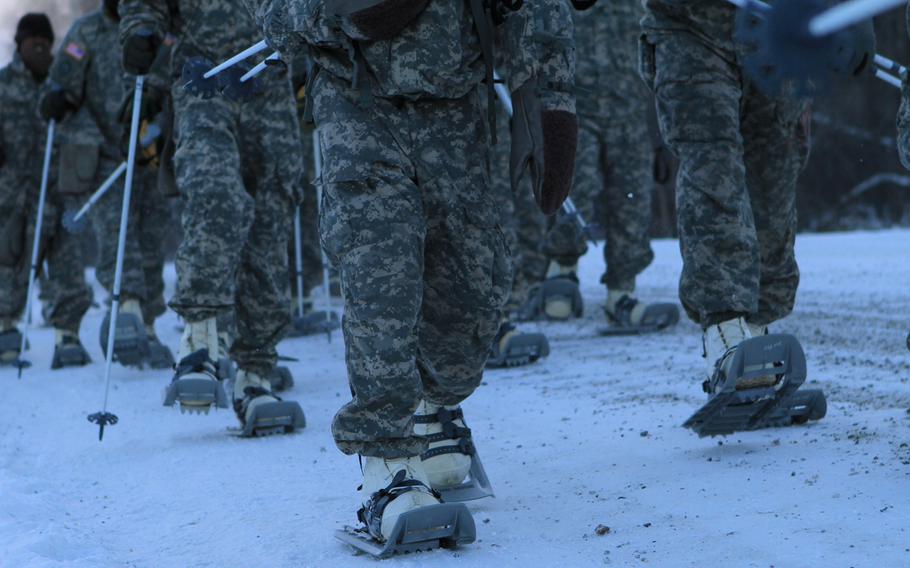 In this file photo from Nov. 2, 2012, soldiers march to the start line for a snow-shoe race at Fort Wainwright, Alaska. ()

The Army is investigating a platoon of soldiers in Alaska reportedly given a free pass to use racial slurs against each other in what was known as “Racial Thursdays.”

The soldiers belong to 2nd Platoon, C Company, 3rd Battalion, 21st Infantry Regiment, according to a member of the unit who spoke to Army Times.

U.S. Army Alaska spokesman Lt. Col. Alan Brown confirmed to the Times and other outlets that a commander’s inquiry was launched last week.

“When I first got to my unit, someone said we should do ‘Racial Thursdays’ because it’s been a tradition,” said the soldier, who asked to remain anonymous. “It’s something they made up where you can say any racist remark you want without any consequences. The platoon sergeant said no, but [it’s] still going on.”

The soldier, a staff sergeant, added: “We’ve had soldiers almost fight over the crap that’s going on here.”

According to Army Times, the NCO, who is black, said no one has directed any racial slurs towards him because he made it clear he would not participate or put up with the practice.

But he also said he felt compelled to bring the issue to the media because the unit “has a bad habit of sweeping things under the rug.”

The unit is the same unit that Pvt. Danny Chen belonged to.

Chen, who belonged to C Company, committed suicide in 2011 while deployed to Afghanistan. Authorities said Chen killed himself because he was hazed over his Chinese ancestry.

At least eight soldiers were either court-martialed or administratively punished in the case.

“There is absolutely no connection between this current investigation and the case of Pvt. Danny Chen,” Brown told the Times, noting that leadership had turned over several times since the Chen situation.

The NCO who spoke to Army Times said he filed an equal opportunity complaint against his platoon leader, who allegedly encouraged “Racial Thursdays” as a way to build morale and camaraderie.

Another soldier in the unit, a junior enlisted who also asked to remain anonymous, verified what the NCO told Army Times.

“The way it was put to me was it was a tradition among the guys,” the junior soldier said. “Every Thursday, they wouldn’t make you, you didn’t have to participate, but they’d remind you. Everybody would get a joke in or one person would be picked out and everybody would say jokes to that one person.”

The junior soldier said he was afraid to speak up against the practice.