Buy Photo
The Palazzo Chiericati serves as Vicenza's municipal art museum, with several floors of paintings and sculptures from the early Middle Ages to the Baroque period. The palazzo was designed by Andreas Palladio, the famous Renaissance architect and its construction began in 1550. (Nancy Montgomery/Stars and Stripes)

Buy Photo
The Palazzo Chiericati serves as Vicenza's municipal art museum, with several floors of paintings and sculptures from the early Middle Ages to the Baroque period. The palazzo was designed by Andreas Palladio, the famous Renaissance architect and its construction began in 1550. (Nancy Montgomery/Stars and Stripes) 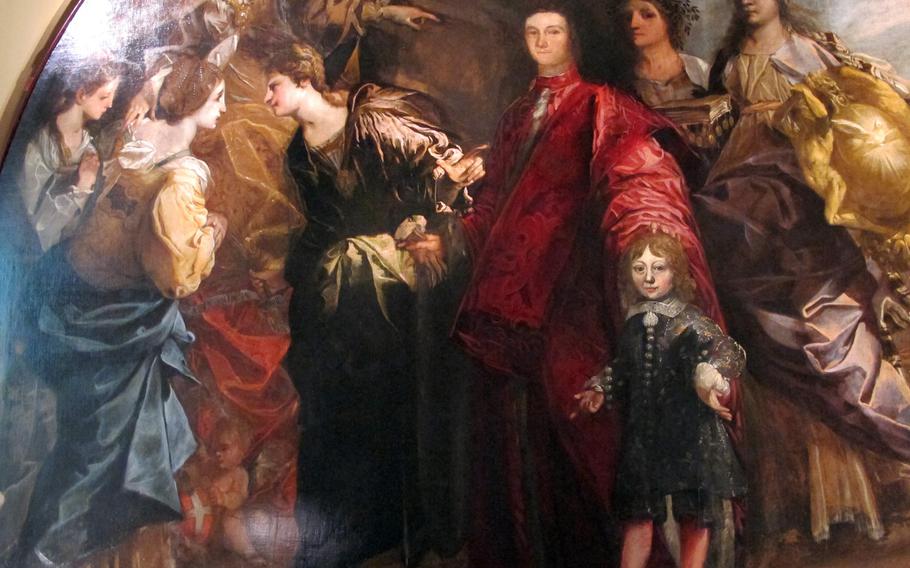 Buy Photo
Local painter Francesco Maffei in 1655 painted this highly symbolic work of one of the city's podestas, or chief magistrates, during Vicenza's golden age and it is part of a new exhibition at Palazzo Chiericati in Vicenza. The female figures represent faith, virtue and abundance. The cherub represents Vicenza. (Nancy Montgomery/Stars and Stripes) Buy Photo
Prospero Fontana is thought to have painted this image of Mary and a merry baby Jesus on display at the Palazzo Chiericati in Vicenza in about 1539. The older gentleman is Joseph while the older lady is Saint Elizabeth, mother of a very young John the Baptist. ''Only Saint John, with his hands joined, kneels in sign of adoration, is aware of the identity and destiny of the newborn,'' according to museum notes. (Nancy Montgomery/Stars and Stripes) 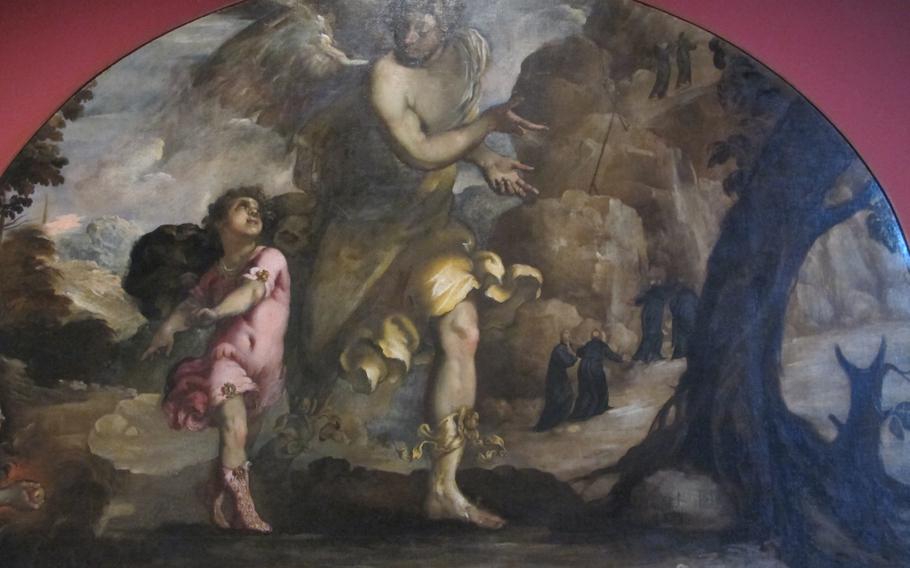 Buy Photo
''The Guardian Angel,'' a 1629 work by Francesco Maffei on display at the Palazzo Chiericati in Vicenza, Italy. (Nancy Montgomery/Stars and Stripes) 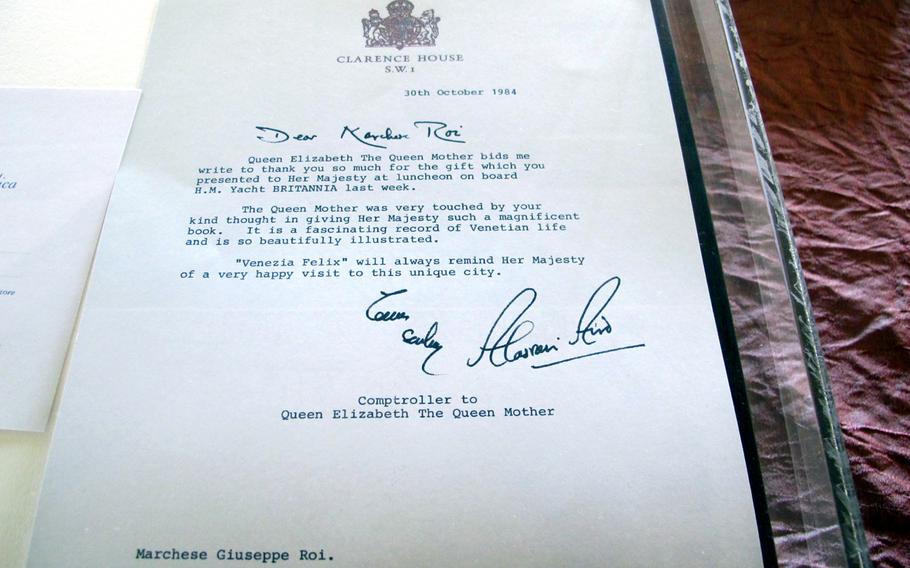 Buy Photo
The Palazzo Chiericati in Vicenza on its top floor houses the donated books, engravings and sketches of Giuseppe Roy, a wealthy Vicenzan, art patron and international man about town whose friends included Princess Margaret of Britain. Included in the collection is this 1984 note from the Queen Mother Elizabeth, thanking Roi for a book he gave her about Venetian life. (Nancy Montgomery/Stars and Stripes)

Every picture tells a story, and in Vicenza’s civic museum, they’re not all pretty. Little girls are fated to an arranged marriage or the nunnery. A young man is shot with arrows then clubbed to death. Another is turned into a stag and killed by his own hounds.

But there’s sweetness, too, in the Palazzo Chiericati’s current collection of paintings, which explores the history of art, the city and its local artists through the medieval and early modern centuries.

The holy family looks happy when they’re young. And if you’ve ever considered what the ideal guardian angel might be like, look no further than “The Guardian Angel,” painted in 1629. He’s your big, handsome best friend and he’s probably taking you to a baseball game.

It had been more than a year since I visited the museum, which was then exhibiting 18th-century Venetian art and a huge collection of tiny tin soldiers. It closed for months during the coronavirus lockdown and reopened with paintings and new rules in place. No more than 40 people can enter the huge palazzo at the same time. The hot summer day I went, I encountered only four other people in the cool, quiet galleries, not including the guards, who strictly enforce the mask mandate. A temperature check is also mandatory.

In the current exhibition, alongside the museum’s more famous works by Tiepolo, Piazzetta, Ricci and Pittoni, are those by local painters such as Francesco Maffei, who was born in Vicenza and died of the plague in Padova in 1660.

One gallery is dedicated to paintings celebrating Vicenza’s various podestas, or chief magistrates, during the city’s golden century of “maximum splendor,” according to the museum, which provides English translations for all its explanatory signs.

The golden era began after Vicenza was annexed to the Venetian Republic in 1404, the signs say, providing security and wealth and art leading to the glories of Palladio’s grand buildings, such as the palazzo itself, built beginning in 1550.

The paintings are also chatty if you understand the language. Podesta Alvise Fosarini, in a 1655 painting by Maffei, is sharing the space with not just any young women but with Faith, Obedience, Virtue and Abundance.

When you’ve had your fill of religious, mythological and civic notables of centuries past, you can head up to the attic and to the swinging ’60s. That’s where the collection of international jetsetter, art patron and Vicenza native Giuseppe Roi’s books, engravings and sketches by the likes of Picasso and John Singer Sargent is housed. A marquis, Roi palled around with people like Princess Margaret and Anthony Snowden, and there are photos to prove it.

COSTS: Museum entry is 7 euros for adults, 5 euros for children older than 6. Free with military ID the first Sunday of the month.