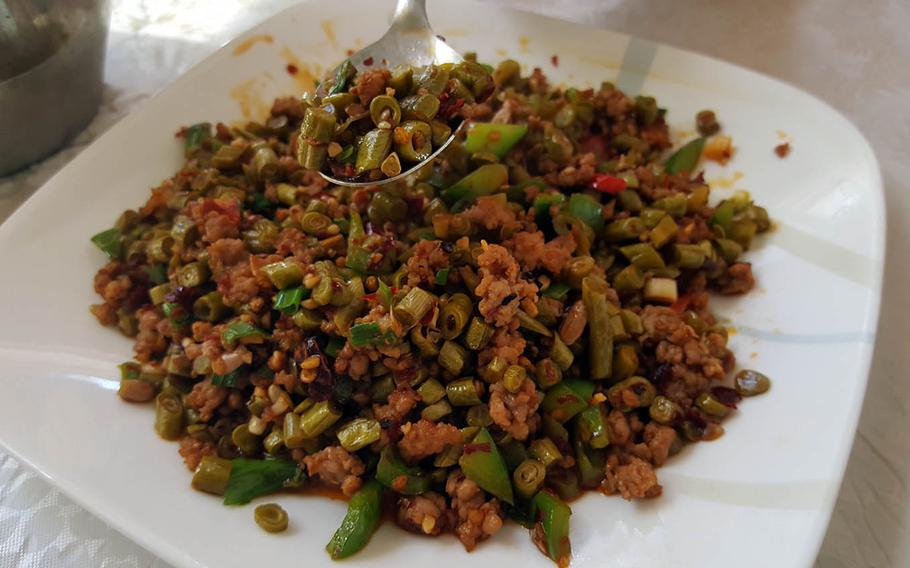 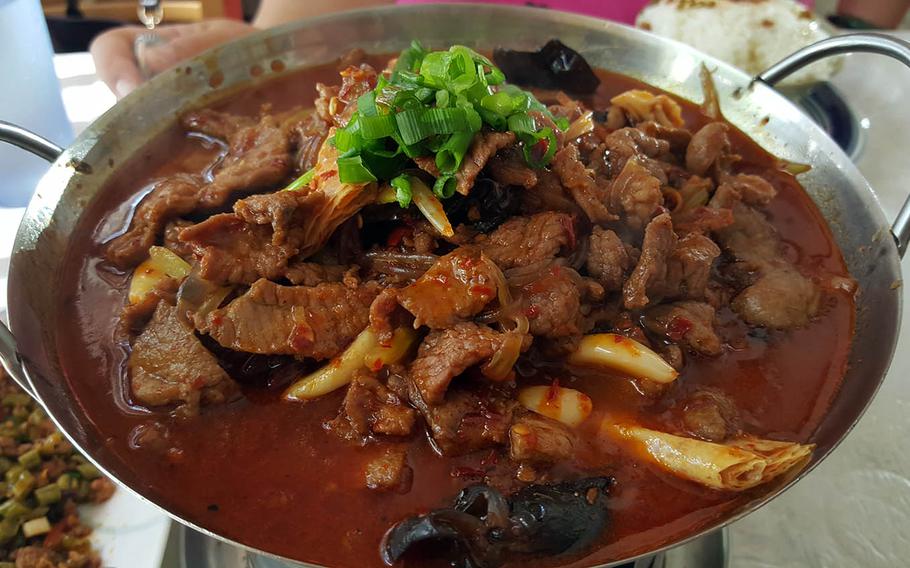 Buy Photo
The griddle lamb at Hunan Cuisine in Honolulu simmers on a flame that keeps it piping hot. (Wyatt Olson/Stars and Stripes) 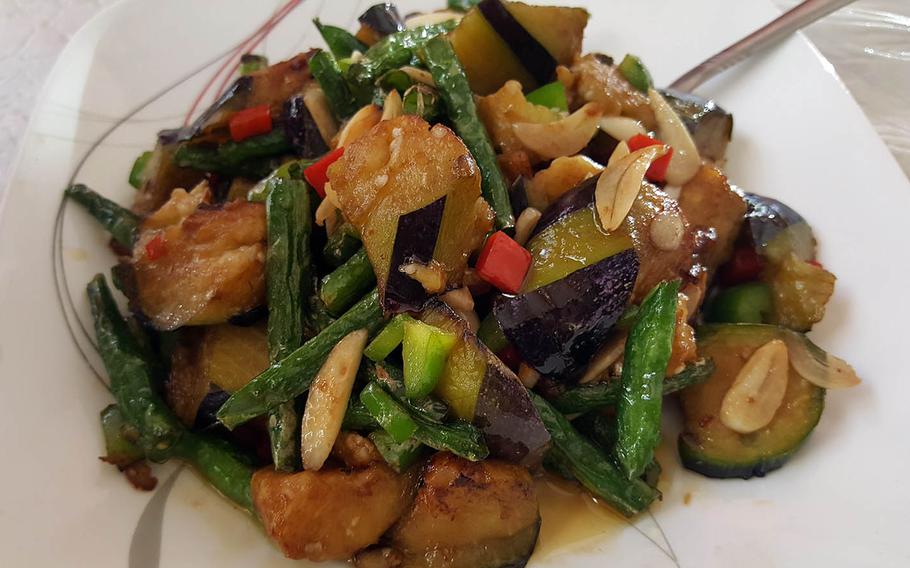 Buy Photo
The green string beans with eggplant from Hunan Cuisine in Honolulu is as colorful as it is delicious. (Wyatt Olson/Stars and Stripes) 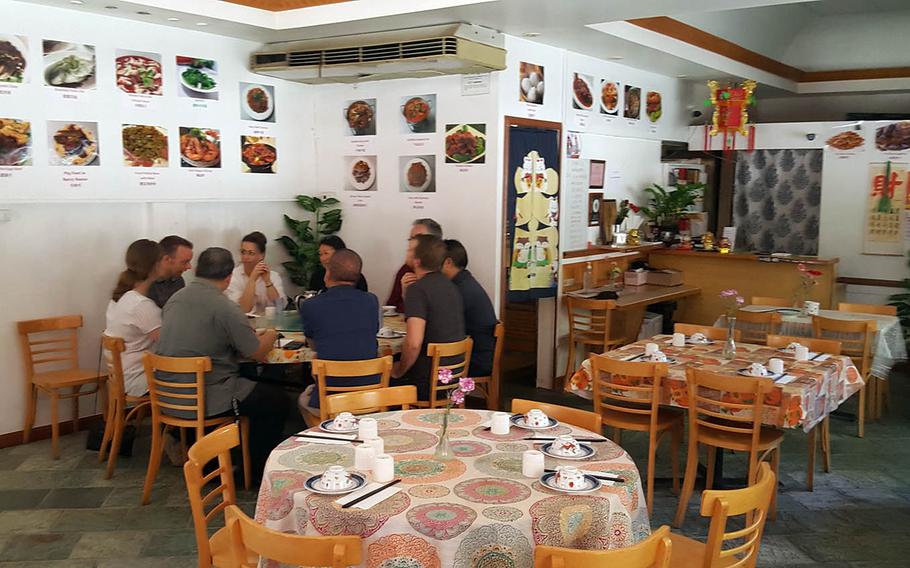 Revolutionary Chinese leader Mao Zedong famously said that if you can’t endure the heat of red peppers, you’ll never be much of a fighter.

The claim was more or less a boast about the food he’d grown up eating in Hunan Province in south-central China. There, the red chili pepper is king — or, as is more appropriate of China, emperor.

The red pepper is also the star at Honolulu’s Hunan Cuisine restaurant, where the only thing pedestrian is the name of the place. It lies on the northern tip of Chinatown and is easy to overlook whether driving or walking. But it’s a gem with perhaps the best, most authentic Hunan food in the city.

If you’re at all a newbie to Hunan-style food, the restaurant makes it less daunting to try. The menu includes many photos of dishes, and much larger photos of all the dishes decorate the walls.

Hunan food uses a wide variety of chili peppers, but they are usually either dried or pickled in vinegar.

Most of us don’t actually eat the dried chilies in the dishes — we can’t all be revolutionaries — and for the most part they’re not intended to be consumed. Instead, they infuse the food with slow-burning heat that will make you put down your chopsticks mid-meal for a break.

First, order from the Hunan Specialties section of the menu, as you won’t typically find these at many Chinese restaurants.

Start with one of the griddle dishes, which all capture the quintessential Hunan flavors. Choices are beef tendon, beef tripe, lamb, pork intestine, fish fillet (all $19.95) and sliced potato ($14.95).

The griddle dishes are heated over a flame on your table, so you’ll watch as the ingredients smothered in red chili sauce begin a slow boil.

Like all dishes at this restaurant, they are communal, or family-style. The griddle dishes serve at least two very hungry people and twice that if you order more than two other dishes for your meal here.

My personal favorite is the lamb, with ample slabs of it heaped over noodles swimming in the sauce below. Lamb always needs to be served hot, and the flame below the griddle keeps it searing.

Oddly, Chairman Mao’s red-braised pork ($14.95), one of the best-known Hunan dishes, is not the chili-fest you might expect, given its namesake’s devotion to hot peppers. Equally sweet and spicy, the pork belly is first sauteed in caramelized sugar, and then stir-fried in ginger, star anise, cinnamon and, of course, chilies.

For a little break from the heat, try the fried pickled bean with mincemeat ($10.95). This is Chinese snake beans — green beans that grow about a foot long — finely chopped and then marinated to an exquisite sourness. They’re then stir-fried with ground pork.

The people of Hunan are fond of their green beans, so you’ll find them included in many of the dishes. The green string beans with eggplant dish ($9.95) contains more of the latter than the former, and it’s firm and flavorful.

If you want to go full-Hunan, then you’ll have to order the steamed fish head with chopped peppers (market price). It’s a humongous fish head (and neck), with a surprisingly ample amount of meat to be found in its cheeks and skull.

Hard-core Hunan food aficionados will gobble up the eyes and cartilage, which have been steeped in the spicy blend of chopped chilies that cap the head.

Directions: From Waikiki Beach, head east on Ala Wai Boulevard, then take a right onto Kalakaua Avenue. In about three-quarters of a mile, turn left onto Beretania Street and drive two miles. Restaurant is on the left on the corner of the block. Meter parking on surrounding streets.