Re-create the taste of Disney theme park snacks at home 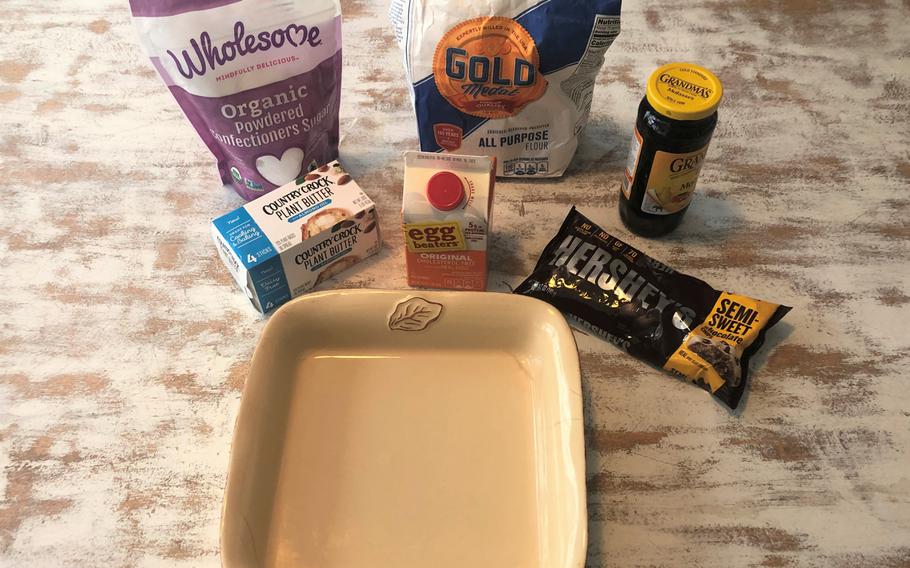 Buy Photo
Ingredients are assembled for Disney-inspired cookie fries. The original recipe is vegan, but a few adjustments were necessary based on availability at the commissary. (Gregory Broome/Stars and Stripes)

Buy Photo
Ingredients are assembled for Disney-inspired cookie fries. The original recipe is vegan, but a few adjustments were necessary based on availability at the commissary. (Gregory Broome/Stars and Stripes) Buy Photo
The finished dough for Disney-inspired cookie fries goes into the refrigerator for 20 minutes of cooling before moving on to the oven. (Gregory Broome/Stars and Stripes) Buy Photo
Ingredients are assembled for the Grilled Three-Cheese Sandwich, based on a dish served at Woody's Lunch Box at Disney's Hollywood Studios. (Gregory Broome/Stars and Stripes) Buy Photo
The Grilled Three-Cheese Sandwich is made in three steps: a cream cheese spread for inside the sandwich, a garlic spread for the outside of the bread and the final assembly of the sandwich. (Gregory Broome/Stars and Stripes) Buy Photo
The finished product of the Grilled Three-Cheese Sandwich, based on a dish served at Woody's Lunch Box at Disney's Hollywood Studios, is served. The tangy, flavorful sandwich may make it difficult to return to the simpler cheese, bread and butter variety of grilled cheese. (Gregory Broome/Stars and Stripes) 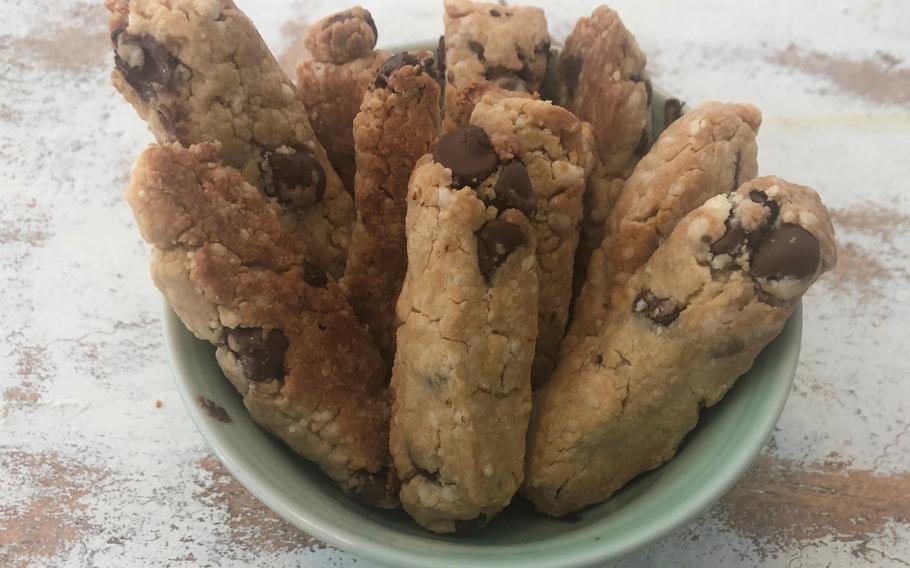 Buy Photo
Cookie fries, a homemade version of a popular Disney delicacy, are served. The made-from-scratch treat is a great alternative to processed snacks. (Gregory Broome/Stars and Stripes)

I’m a former resident of Florida and was a frequent visitor to the state’s many fantastic theme parks. I missed those parks long before the coronavirus closed their gates, and I miss them even more intensely now. The experience of theme parks will doubtless change after the pandemic, and I’d rather it not change at all.

It’s impossible to re-create the theme park experience under quarantine, but it’s possible to indulge in some adjacent nostalgia. My family and I have extracted maximum value from our Disney Plus subscription, watching bizarre vintage films like “The Three Caballeros” and modern Pixar offerings like “Inside Out.” Recently, my wife and I expanded this project by trying out a couple of recipes made famous at Disney theme parks and published this spring on the Disney Parks Blog.

We started by preparing cookie fries, a popular dessert served at Beaches & Cream Soda Shop at Disney’s Beach Club Resort. The official version is vegan, but I found only regular Egg Beaters and Hershey’s conventional chocolate chips at the commissary, so we couldn’t replicate that aspect. We created the dough easily, put it in the refrigerator to chill and moved on to the main event.

Our entree was the Grilled Three-Cheese Sandwich served at Woody’s Lunch Box in the Toy Story area of Disney’s Hollywood Studios. Grilled cheese is one of the few things I can competently cook, so I approached this recipe with confidence. But it proved a lot more complex than my usual sandwich.

This grilled cheese is made in three parts. First is a cream cheese spread to complement the cheese inside the sandwich. Next is a mayonnaise-based garlic spread for the outside of the bread. With the condiments made, the final step is to assemble the sandwich.

Again, we were prevented from following the recipe exactly, but this recipe seems pliable enough for some minor substitutions. We used shredded Colby Jack cheese in place of shredded cheddar and were forced to chop up a block of cheddar in the absence of sliced cheddar. Most egregiously, we scrapped the suggested artisanal bread for a loaf of decidedly nonartisanal Wonder Bread Texas Toast.

With assembly complete, we formed the chilled cookie dough into fry-shaped cylinders, popped dessert into the oven and started grilling one sandwich at a time in a frying pan.

The end result was an excellent lunch. The grilled cheese was so flavorful that I’ll likely never return to my plain grilled cheese again without raiding the spice rack. I was initially skeptical about the intrusion of anything but cheese, bacon or ham inside a grilled cheese, but that cream cheese spread proved me wrong. The cookie fries came out plumper than the picture — more like cookie steak fries. But they were quite good, and the fact that my wife and I baked them from scratch made them more satisfying than the processed snacks with which we’d packed our quarantine kitchen.

Who knows when it will be possible to walk around a bustling theme park again and get the authentic version of these treats, along with maybe a giant turkey leg and some churros? Until then, we’ll do what we can. And in a time that demands comfort food, a tasty grilled cheese and chocolate chip cookies are about as good as it gets.