Soup and salad were included with a weekly lunch special in early February at the Schlemmerscheune restaurant in Weilerbach, Germany. The tables had a fancy touch, with a lighted-candle and flower arrangement. (Jennifer H. Svan/Stars and Stripes)

Soup and salad were included with a weekly lunch special in early February at the Schlemmerscheune restaurant in Weilerbach, Germany. The tables had a fancy touch, with a lighted-candle and flower arrangement. (Jennifer H. Svan/Stars and Stripes) This corn-fed chicken with rice in a curry sauce was one of the lunch specials in early February at the Schlemmerscheune restaurant in Weilerbach, Germany. The restaurant has new lunch specials every week, Tuesday to Friday, from 11:30 a.m. to 1:30 p.m. (Jennifer H. Svan/Stars and Stripes) 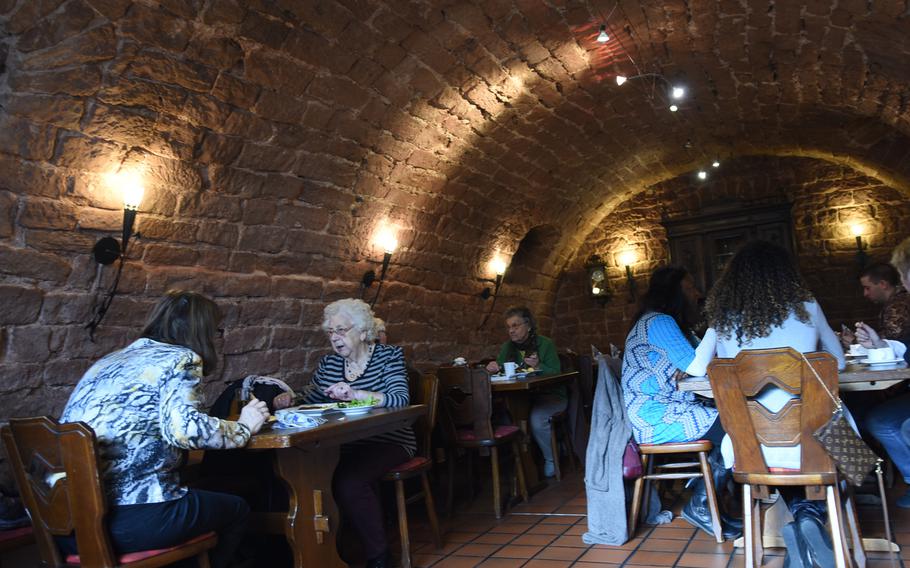 With its high-arching stone ceiling, the downstairs area in the Schlemmerscheune in Weilerbach, Germany, looks as though it was once an old wine cellar, an atmosphere that lends some charm to the traditional German restaurant. (Jennifer H. Svan/Stars and Stripes) A soft, sugary doughnut was a surprising but delightful dessert during a recent lunch outing to Schlemmerscheune restaurant in Weilerbach, Germany. (Jennifer H. Svan/Stars and Strip) 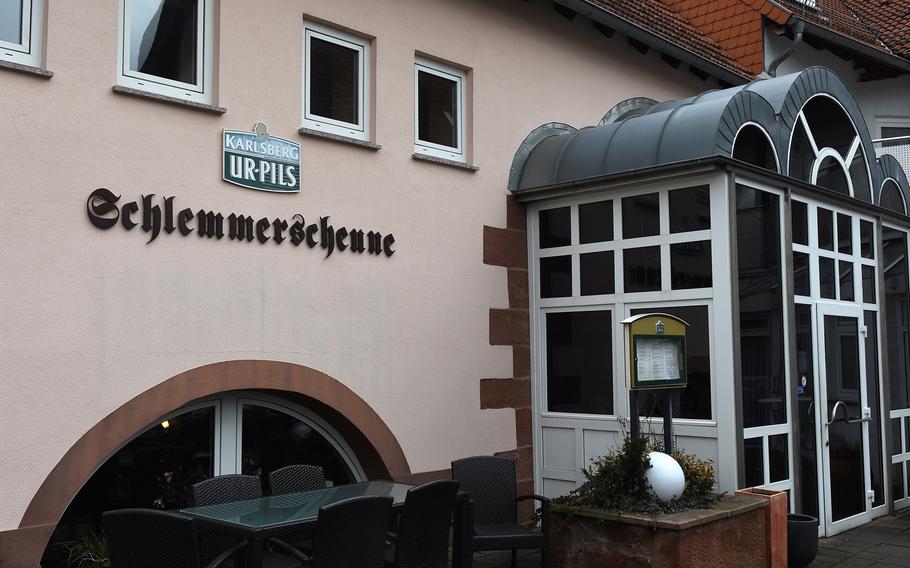 The Schlemmerscheune restaurant in Weilerbach, a village near Ramstein Air Base, is aptly named.

In English, it means “gourmet barn.”

The building that houses the restaurant, which is connected to Hotel Degen, looks like a former barn inside. The downstairs, with high-arching stone ceilings — and the most charming place to sit — appears to be an old wine cellar.

That’s the barn part. The food, meanwhile, certainly meets my definition of gourmet. In this case, that includes eating a sugar doughnut with a fork.

On a recent weekday in early February, perhaps because it was also Fasching season, dessert for the lunch specials was a doughnut. On a plate. With a fork.

It was delicious, soft enough to slice with the side of a fork.

But plated doughnuts aren’t the only fancy food at Schlemmerscheune. Other offerings from the regular menu, and solidly in the gourmet category, include lamb tenderloin seasoned with garlic and thyme and served with a side of green beans and bacon; prawns and Atlantic sole with a prosecco foam sauce; and my favorite of all, chicken breast fillet with mango sauce and a side of buttery tagliatelle.

I tried the chicken breast fillet during a previous visit to Schlemmerscheune and it was divine, the rare kind of dish that was so good I would have licked the plate if no one was looking.

That mango sauce was on my mind when I went there for lunch recently. But I thought it best to order something different, to see if it was equally as good. I ordered the Maispoularde — corn-fed chicken — with a side of vegetable rice in curry sauce.

The curry sauce didn’t knock my socks off, but the chicken was tender enough to eat without sauce. Whether that was due to cooking methods or the type of chicken, I would sure like to know. Chicken baked at my house tends to be tough as shoe leather.

Most reviews on the travel website Trip Advisor attest to this. Out of 32 traveler ratings, 22 rated the restaurant “excellent,” nine gave it a “very good;” one outlier checked off “terrible.” That might have been the person who complained, “The waitress loudly insisted several times that they had no turkey on the menu.”

Who needs turkey when the chicken is top-notch, I say.

One caveat: The prices are a little on the high side, but they’re well worth it, in my opinion. If you’re pinching pennies, the best value is the lunch menu. The day I was there, most specials were 8.90 euros — or about $11. That included an appetizer — on this day it was soup — and a dessert.

Prices: Dinner entrees with meat start at 12.50 euros (about $15) and go up from there; vegetarian entrees start at 9.50 euros; most lunch specials are less than 10 euros and include a starter and dessert.

English menu: The regular menu is in German and English; lunch specials are in German only, but staff can help translate.