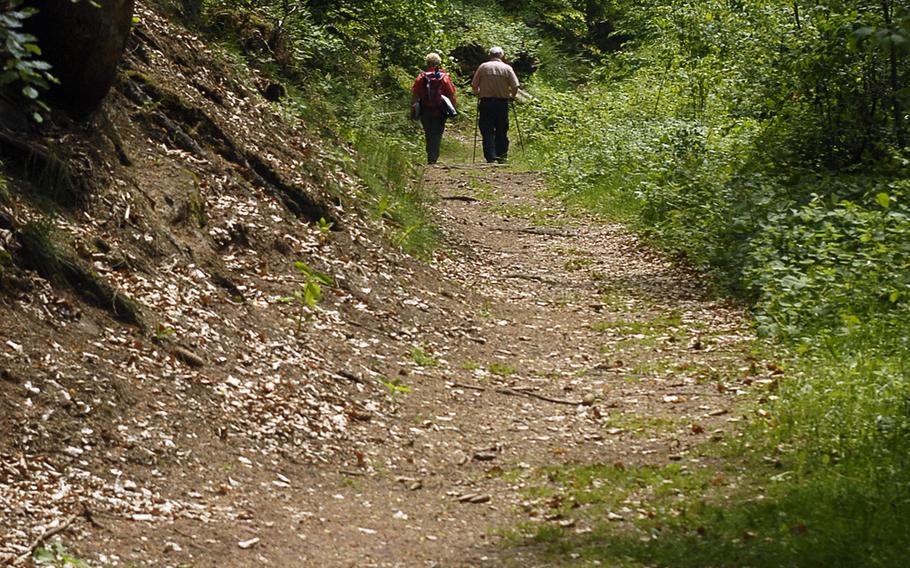 Buy Photo
A couple takes a solitary walk in the Pfälzerwald near Kaiserslautern, Germany. It is one of the biggest forested areas in Germany, according to Bernd Wallner, director of the forest's hut and trail system. (Kevin Dougherty/Stars and Stripes)

Buy Photo
A couple takes a solitary walk in the Pfälzerwald near Kaiserslautern, Germany. It is one of the biggest forested areas in Germany, according to Bernd Wallner, director of the forest's hut and trail system. (Kevin Dougherty/Stars and Stripes) 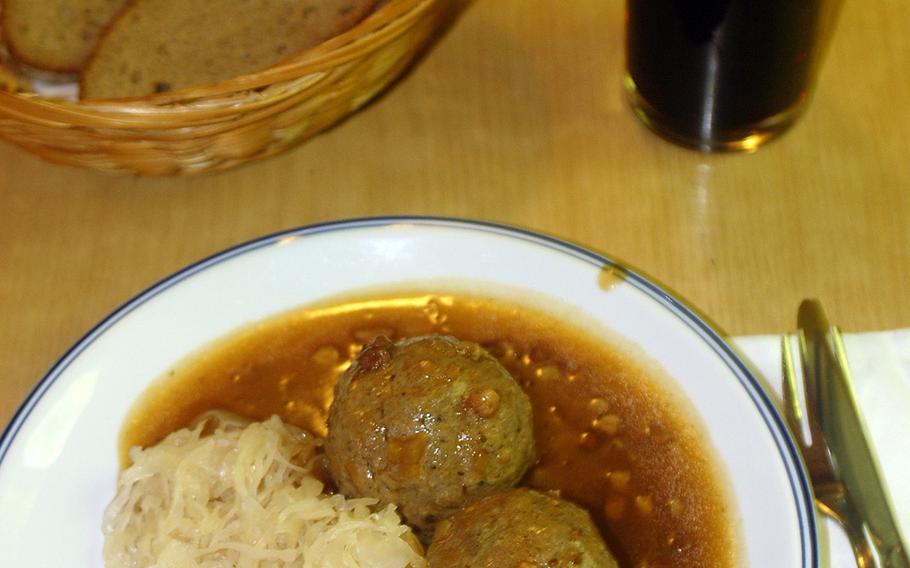 Buy Photo
A common German dish of Leberknoedel -- liver dumplings -- are among the courses available in some of the huts that dot the Pfälzerwald south of Kaiserslautern, Germany. There are nearly 100 huts in the forest, and dozens of them serve beverages and warm food. (Kevin Dougherty/Stars and Stripes) 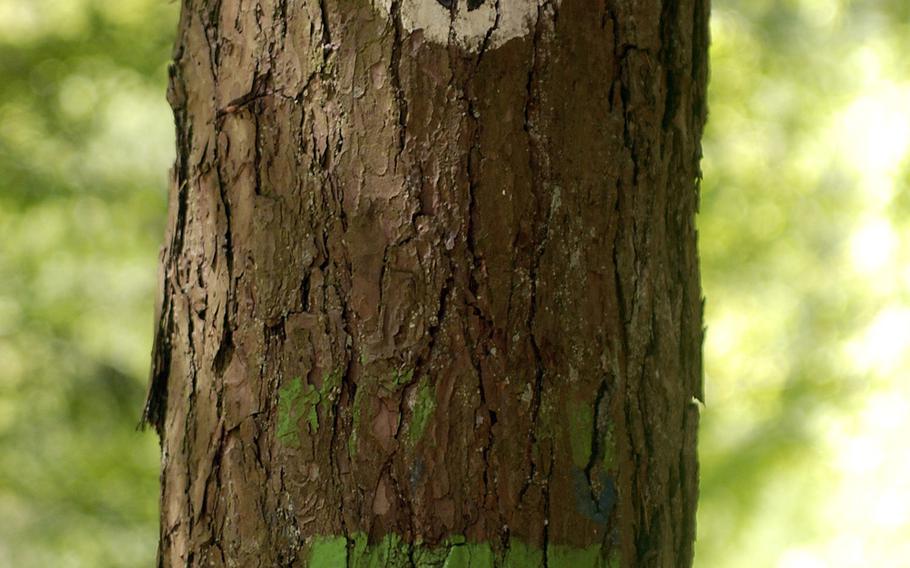 Buy Photo
A blaze and numbers mark a hiking trail in the Pfälzerwald near the German town of Esthal. The Pfälzerwald is one of the largest forests in Germany, according to Bernd Wallner, director of the forest's hut and trail system. (Kevin Dougherty/Stars and Stripes) 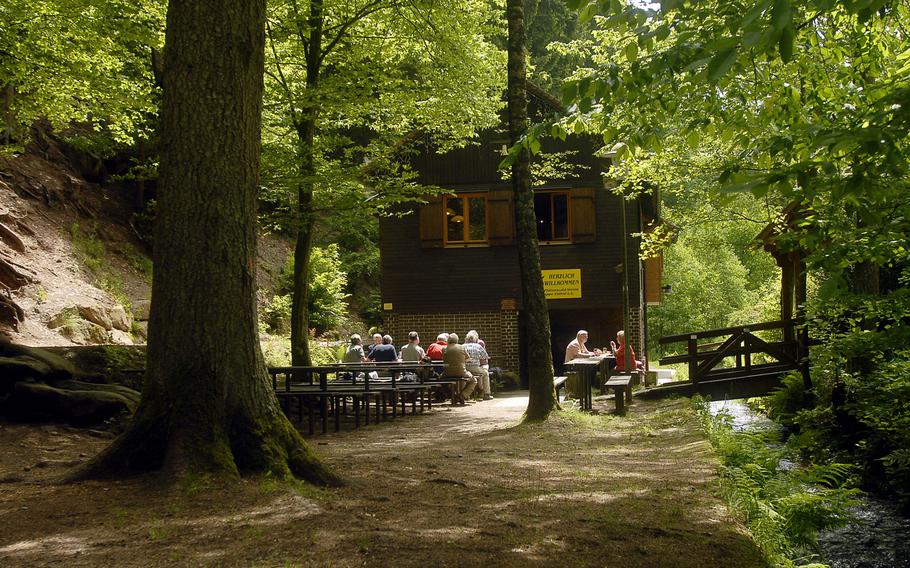 Buy Photo
The Wolfsschlucht-Hütte near Esthal, Germany, serves food and beverages on Wednesdays, Saturdays and Sundays. Other huts in the expansive network of huts in the Pfälzerwald near Kaiserslautern, Germany, serve food as well, and some even provide basic lodging. (Kevin Dougherty/Stars and Stripes) 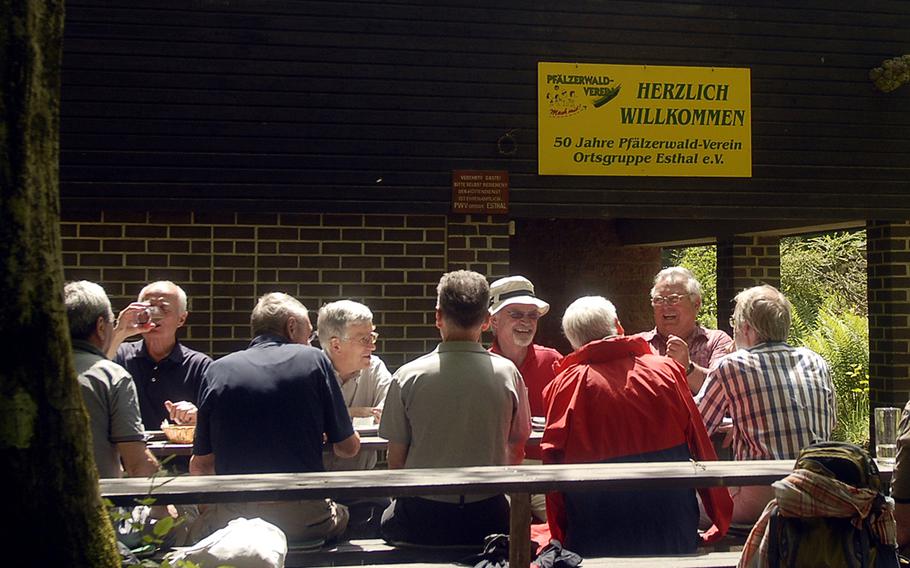 Buy Photo
After walking for a couple of hours, a band of hikers takes a break on the porch of the Wolfsschlucht-Hütte near Esthal, Germany. (Kevin Dougherty/Stars and Stripes) 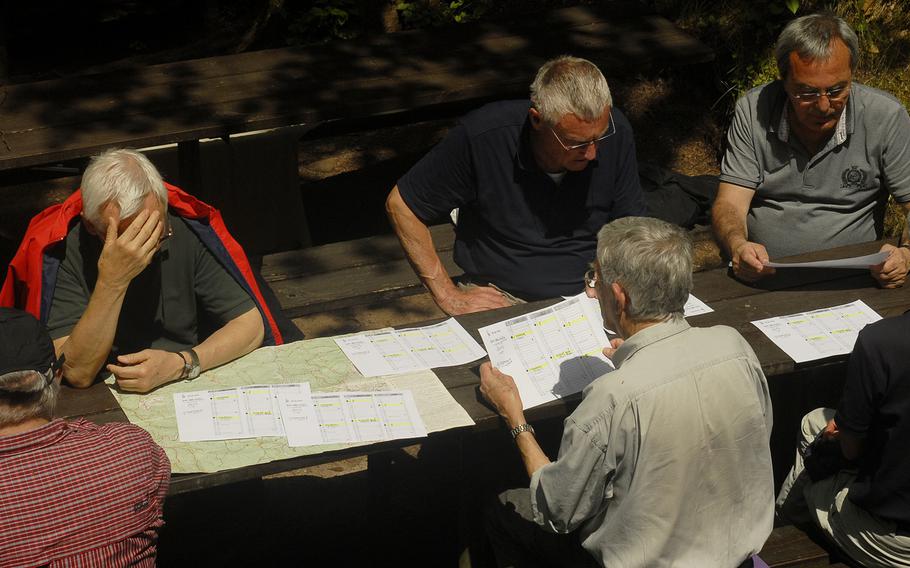 Buy Photo
A group walking through a section of the Pfälzerwald, one of the largest forests in Germany, take time to survey maps before hitting the trail again. (Kevin Dougherty/Stars and Stripes)

Deep in the woods by a lazy stream near Esthal, Germany, Alyos Brüch leaned on his walking stick and nodded toward the cottage in front of him.

“You know ‘Hansel and Gretel’? ” Brüch said of the Brothers Grimm classic. “This house is like that old woman’s house.”

Long on light, summer days afford people in southwestern Germany more time to explore an enchanting forest laced with trails and peppered with scores of huts, some of the fairy tale variety.

The Palatinate Forest Nature Park, or Pfälzerwald, near Kaiserslautern, is the densest forest in Germany and one of the largest, with a network of trails covering more than 7,000 miles. An integral part of the network is a system of huts, the majority of which have restaurants.

“We have nearly 100 cottages,” said Bernd Wallner, director of the Pfälzerwald-Verein, the organization that oversees the network. “Many, many people come [to the forest] on the weekend. It’s beautiful and it’s very quiet.”

The Palatinate Forest is vast, encompassing nearly 700 square miles and extending to the French border in the south and the German Wine Road in the east. Many of the trails have been traversed for centuries.

Wolfsschlucht-Hütte, the hut Brüch was visiting, is located outside the hamlet of Esthal, west of the town of Lambrecht. Built in 1961, Wolfsschlucht-Hütte is one of 89 huts offering hikers warm food, drinks and restroom facilities. The oldest hut in the Palatinate system dates to 1908, Wallner noted.

Eighteen of these restaurant huts also include overnight accommodations that can be booked in advance. Ten other huts are one-room enclosures used only for shelter.

The one-room huts “are very simple and very small,” Wallner said. But all of them, large or small, he added, are “a big part of the culture of the Palatinate.”

Wolfsschlucht-Hütte is a typical hut made of stone and wood with an outdoor porch and an indoor dining area with eight tables.

On this day, three women were running the kitchen. One of them was Irene Hartmann, whose son-in-law is a former U.S. soldier.

Hartmann joked with Brüch and other hikers as she stood at the service window passing out plates of hot food. A popular dish this day was Leberknödel (liver dumplings) served with sauerkraut and rye bread.

“I like this place,” Brüch said. “It has a very nice atmosphere.”

Location: The huts that serve food are listed on the Pfälzerwald-Verein website and are referred to as either “Rasthäuser” or “Wanderheime.” Both serve food and beverages, but the “Wanderheime” also offer overnight accommodations.

Directions: Some of the huts are reachable by car, albeit along narrow secondary roads. Many are accessible only by foot, and a trail map is necessary. Those are available on the website or by contacting the Pfälzerwald-Verein office in the town of Neustadt an der Weinstrasse, Fröbelstrasse 24.

Hours: Huts that serve food are open on weekends. Some are also open one day during the week, typically Wednesday, though it’s best to check before you set out. The Wolfs-schlucht-Hütte near Esthal opens at 11 a.m. Wednesdays and Saturdays and at 10 a.m. Sundays and holidays. Closing hours vary, but many huts close at about 6-7 p.m.

Food: At the Esthal hut, the modest menu includes such dishes as Leberknödel, bratwurst and Frikadellen (burgers) with sauerkraut or pickles. Soup, cheese and cake are also on the menu.

Prices: Food is inexpensive, usually no more than 5 euros a meal. Drinks cost between 1-3 euros.

Dress: No suit and tie or dress is required. Hiking boots or sneakers are standard.

Information: The Pfälzerwald-Verein website is www.pwv.de. Click on the red tab “Hütten und Ortsgruppen.” That page includes three links, but it’s the first one, Online Hüttenverzeichnis, that has a list of huts and other information, including the addresses and operating hours. Some listings include a web link to that particular hut. The Pfälzerwald-Verein office’s phone number is (+49) (0) 06321-2200.