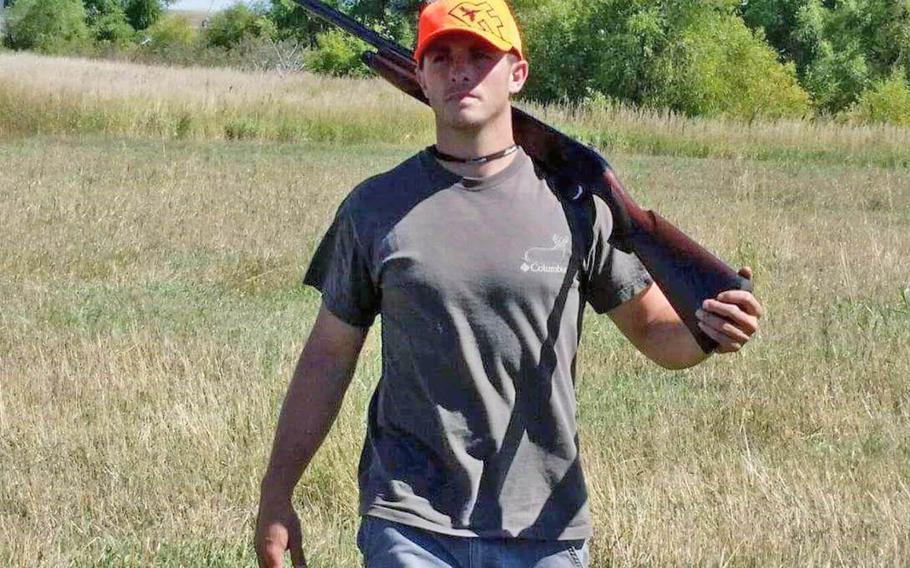 Jonathan Elm is a would-be therapist for the VA, except that his processing has been put on hold with the federal hiring freeze. ( Courtesy of Jonathan Elm)

WASHINGTON — Air Force veteran Jonathan Elm made a 600-mile move, leased an apartment and was preparing to start a job as an addiction therapist with the Department of Veterans Affairs when he received a message Wednesday from the VA. His employment was put on hold because of the temporary federal hiring freeze imposed by President Donald Trump.

“I about fell off my … chair,” Elm said. “It caught me off guard. I belong in the government. I have worked very hard, served in the Air Force honorably, and I am the highest qualified person for the position.”

A presidential memorandum that Trump signed Monday ordered agencies to stop hiring for vacant positions for 90 days, starting Jan. 22, until the Office of Personnel Management devised a plan to cut federal jobs through attrition.

Mark Sandy, acting director at the Office of Management and Budget, issued guidance on the freeze Wednesday, stating that anyone with a confirmed start date before Feb. 22 could still work.

But Sandy’s guidance is more open-ended for those in a position like Elm -- who has only a tentative offer – and those with confirmed start dates at federal agencies after Feb. 22. For those people, the decision on whether they’re hired will be left up to one person’s reasoning.

“[T]he agency head should review the position to determine whether the job offer/appointment should be revoked, or whether the individual should report for duty on an agreed upon start date,” Sandy’s guidance reads.

Sandy goes on to say that agency heads should take into consideration “essential mission priorities” and current resources and funding levels when deciding whether to continue with those hires.

The VA has about 2,300 job openings posted on a federal website. The office of Sen. Jon Tester, D-Mont., the top Democrat on the Veterans’ Affairs Committee, said the agency has 45,000 vacancies.

The department has struggled to hire health care workers since it was rocked by a scandal over long patient wait times in 2014.

After scrambling to understand the hiring freeze, VA leadership issued a statement Tuesday night stating that some positions at the VA, including front-line caregivers, would be exempt for public safety reasons.

Friday afternoon, acting VA Secretary Robert Snyder released a list of positions that would be exempt. The jobs were wide-ranging and included various health care positions, support staff, cemetery workers and those working on VA construction projects. Different types of therapists were included on the list of exemptions, but it was unclear Friday whether Elm’s position would remain on hold.

With drug overdoses considered an epidemic in the United States -- and with veterans especially at risk for overdose, according to VA studies – Elm, 30, said he considers his job as an addiction therapist “critical.”

He was set to work at the VA’s campus in Hot Springs, S.D., which is part of the Black Hills VA Health Care System. He assumed his position would be part of the exemption, he said, but as of Friday afternoon, the VA had not contacted him with an update.

In an email sent Wednesday to Elm, a human-resources representative at the VA’s Hot Springs facility told him they would “just have to wait and see.”

While he waits for clarification, Elm is staying at his home in Helena, Mont., making rent payments there and for his new place in Hot Springs. He has moved half of his belongings to his new apartment, he said.

On Wednesday, more than 50 Democrats sent a letter to Trump, asking that he exempt the VA from the hiring freeze. They also urged him to exempt veterans seeking jobs in any federal department.

Republican chairmen of the House and Senate veterans affairs’ committees followed up Thursday with their own letter, asking Trump to exempt patient care providers.

“We must ensure that, while we work toward our mutual goal of VA health-care reform, VA is not further hampered by an inability to recruit high-quality clinicians to meet the immediate health care needs of our veterans,” Sen. Johnny Isakson, R-Ga., and Rep. Phil Roe, R-Tenn., wrote in the letter.

Large veterans organizations – including American Veterans, the American Legion, Veterans of Foreign Wars and Iraq and Afghanistan Veterans – have also spoken out against the hiring freeze at the VA and for job-seeking veterans.

“Veterans, particularly disabled veterans, have often looked to the federal government as an institution where they could find meaningful employment,” American Legion National Commander Charles Schmidt said in a written statement. “This hiring freeze will certainly impact their job prospects.”

A VA spokesman told Stars and Stripes that he could not answer questions about the hiring freeze and referred reporters to another VA employee, who did not respond to emails.

‘Want to be heard’

Elm has known for years he wanted to work at the VA.

He served in the Air Force from 2008 to 2012 as military police and was a senior airman when honorably discharged. He never deployed overseas, but he witnessed friends come home and attempt to self-medicate their trauma by abusing drugs and alcohol, he said.

As an addiction therapist at the Addictive Disorder Services Substance Abuse Domiciliary in Hot Springs, Elm said his job would be to meet with veterans from all over the country, diagnose them and help them to stop relying on drugs and alcohol. He would see them through rehabilitation, and help them find housing while continuing to provide case management.

As a graduate student at South Dakota State University, he interned for the Black Hills VA Health Care System and completed 1,800 clinical hours there. After earning his master’s, he moved home to Helena last year when his mother suffered a heart attack. He knew he wanted to return to the South Dakota VA.

“I knew that’s where I wanted to go,” he said. “All of my graduate coursework related to [post-traumatic stress disorder] and addiction, and my thesis revolved around veterans and active-duty military.”

With his ties to the system, and a 60 percent disability rating for knee and shoulder surgeries -- which granted him preference under the federal veterans employment initiative – Elm expected a smooth hiring process.

In December, he was given a tentative offer, with a start date of Feb. 21.

He had his fingerprints taken and submitted to a drug test. The human resources department at the Hot Springs facility was waiting for those results to come back before confirming his employment.

“They told me, ‘You have the job,’ but I had to wait for labs and fingerprints,” Elm said.

They were still waiting for the results when the hiring freeze went into effect this week.

Elm was a staunch supporter of Trump throughout the presidential campaign, he said. Only one week into Trump’s presidency, though, Elm said the decision to freeze hiring at the VA “is definitely making me think a little bit.”

“I want to be heard,” he said. “I hope and pray something can be done for the ones that have served this country.”