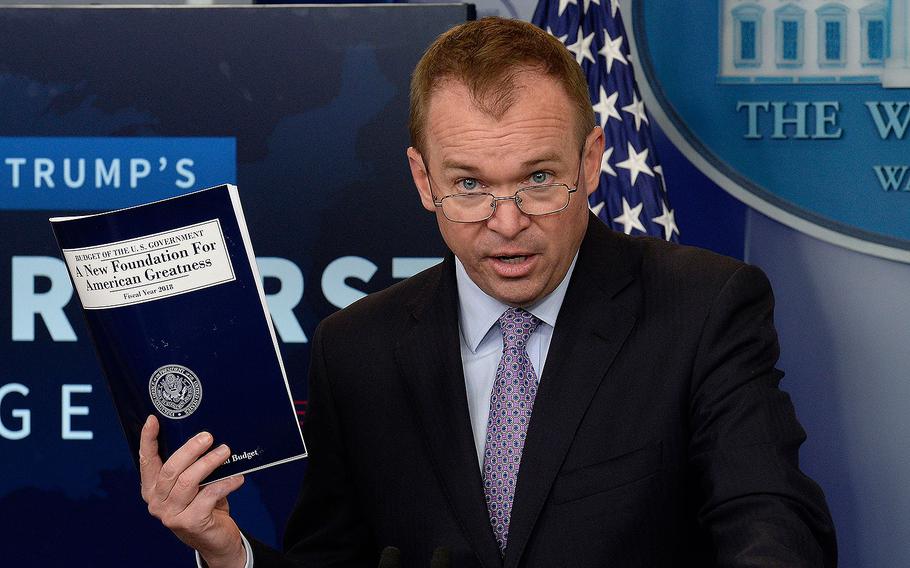 Office of Management and Budget Director Mick Mulvaney speaks during a press briefing about President Donald Trump's 2018 budget proposal on May 23, 2017 in Washington. (Olivier Douliery/Abaca Press/TNS)

President Donald Trump’s first budget request embraces many Obama administration ideas to dampen military compensation growth. It would cap the next military pay raise; hike health care fees “modestly” for working-age military retirees, and increase co-payments on pharmacy drugs for Tricare beneficiaries, including retirees of any age, though prescriptions filled on base would still be free.

But the new administration has fresh cost-cutting plans. Many target federal civilian employees, but one would hit 208,000 seriously disabled older veterans particularly hard. These “IU” veterans have disability ratings from the Department of Veterans Affairs of 60 to 90 percent, but because they aren’t able to work they receive VA compensation as if 100 percent disabled.

Individual Unemployability (IU) status provides, on average, an additional $1,300 a month in VA disability pay. The administration wants Congress to end IU eligibility next year for any veteran 62 and older who qualifies for at least minimum Social Security payments. Their VA compensation would be rolled back to amounts payable based on their actual disability ratings of 60 to 90 percent.

The “IU modernization” plan would save $3.2 billion annually, which VA would use to expand the Choice program, making private-sector health care more available when veterans can’t get timely or appropriate care at VA medical facilities.

Rollback of IU payments hasn’t gotten a serious look from Congress for more than a decade. The Government Accountability Office in 2006 released a report criticizing VA for lax oversight of the program. One criticism by auditors was that VA compensation for being “unemployable” continued into old age.

Veteran service groups can be expected to resist the rollback vigorously.

At the Pentagon, meanwhile, Defense Department officials presented familiar plans for modifying compensation programs starting in fiscal 2018 to save a total of $7.1 billion over the next five years. Here are details:

Pay raise cap: By law, active-duty and reserve component personnel are due a 2.4 percent raise Jan. 1, 2018, to match recent wage growth in the private sector. The budget proposed would cap that raise at 2.1 percent, matching the 2017 raise but staying higher than the 1.9 percent projected for 2018 by Obama budgets. Shaving the raise by 0.3 percent would free up $200 million next year, and $1.4 billion through 2022, to spend on other readiness-related priorities.

Working-age retiree Tricare fees: Last year, Congress embraced the DOD plan to raise Tricare fees, deductibles and co-payments on working-age retirees (those younger than 65). But lawmakers disappointed Tricare officials by applying the fees only to future force members. This will delay any serious tamp down in health care costs through higher beneficiary cost shares for 20 years and create inequities in benefits between generations of future retirees.

The Trump administration wants that “grandfather” protection shelved and current working-age retirees exposed to higher Tricare fees starting in 2018, to save the department $3.6 billion in just the next five years.

In an interview, Jon Rychalski, acting principal deputy assistant secretary of defense for health affairs, said the more important reason to repeal the grandfather protection is to “make things equitable” across year groups of working-age retirees.

Without repeal, he said, “you’re going to have a situation where you have two people potentially working side by side with very different benefits: one grandfathered and one who is not. So, our overarching interest this year is to have one equitable benefit for everybody.”

If Congress agrees, many retirees are likely to view higher Tricare fees as a broken promise and not restored equality. Only the elderly, those who qualify for Tricare for Life (TFL) and Medicare, would be spared higher fees. This budget drops the idea of imposing a new enrollment fee on newly-eligible TFL retirees.

It does propose for Tricare Prime, the military’s managed care option, that the enrollment fee be renamed a “participation” fee and be raised from $282.60 to $350 for single coverage and from $565.20 to $700 for family coverage.

A participation fee would be set too for Tricare Standard and Extra, which are to be merged and renamed Tricare Select on Jan. 1. Retirees using Select would have to pay $450 a year for single coverage and $900 for family coverage.

Though new to Tricare Standard users, Rychalski said, a participation fee is a “best practice” of industry to ensure a health care system knows year to year “who it’s treating. It is our belief that having people buy into the system, to know what our population is, we can better serve that population through disease management service or things like that. And frankly maybe keep costs lower.”

Co-pays for primary and specialty care also would rise. Catastrophic caps on total out-of-pocket health costs would increase to $3,500 from $3,000 per family, with annual participation fees not counted against the cap. Tricare fees, deductibles and co-pays would be adjusted yearly to keep pace with inflation.

Overall, officials estimate, out-of-pocket costs for a non-Medicare-eligible retiree family of three would climb from an average of $1,517 a year to $1,986, assuming a weighted mixed use of network and non-network providers. The proportion of health costs borne by working-age retirees would climb from 8.6 percent to 11.3 percent. Officials argue that retirees had paid an average of 27 percent out-of-pocket in 1996, the year of Tricare was fully implemented.

Higher costs will be accompanied by improved services, Rychalski said.

“We want to have a sustainable benefit, for the beneficiary and for the government,” he said. While older retirees will still cite recruiter promises of free lifetime health care, generations of younger retirees should weigh Tricare coverage and “realize this is actually really a great benefit. And not only is it a great benefit, [they] get great service, great access,” said the interim health care chief.

Prescriptions on the military formulary would continue to be filled for free on base. Co-pays for prescriptions filled off base would rise gradually for generic, brand names and non-formulary drugs. The slope of the increases planned over the next five years would be more gradual than under last year’s proposal.

Last year The Military Coalition, composed of 32 organizations representing members of the uniformed services and their families, opposed any Tricare fee increases until access and quality of care improved. The coalition called the higher fees, then targeted only at new entrants, “disproportionately high” and rejected the notion of a participation fee for Tricare Select (Standard) users.

Rychalski said quality of care remains high, and Tricare users should be seeing improved access to care, the results of multiple reform initiatives.

“While it’s not 100 percent free, our hope is that [beneficiaries] still think this is really a great value,” he said, compared to private-sector health insurance plans.