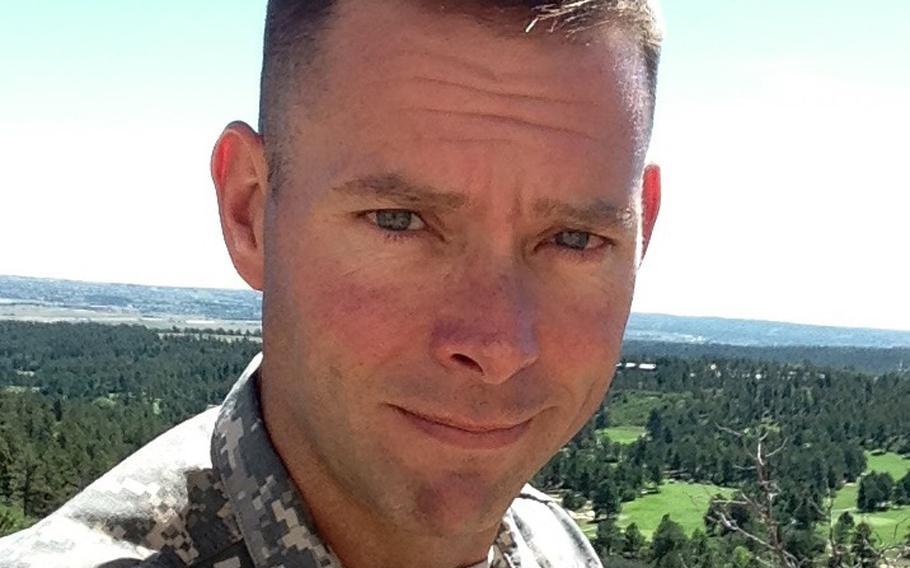 Dunphy is author of the book “The Iron Major Survival Guide,” a self-help book for officers, staff leaders and managers — both in and out of uniform. (Courtesy of David Dunphy)

Dunphy is author of the book “The Iron Major Survival Guide,” a self-help book for officers, staff leaders and managers — both in and out of uniform. (Courtesy of David Dunphy) Having served more than 25 years in the Army, Lt. Col. David Dunphy knows what it takes to be a good leader, no matter your rank. In “The Iron Major Survival Guide,” he provides a series of tips on leadership in an effort to help improve one’s ability to lead and influence others. In the field, on staff or just your average civilian? Dunphy’s direct and often humorous tips and suggestions provide brotherly advice that can help influence beneficial decision-making.

Currently the division chief of training, readiness and exercises for the Joint Force Headquarters-National Capital Region and Military District of Washington, Dunphy took the time to answer some questions via email about himself, the book and what motivated him to write it.

Stars and Stripes: Can you give a brief description of who David Dunphy is, in and out of uniform, and what moved you to begin writing a book to support officers coming up in ranks? Dunphy: Well, I suppose I’m just a regular guy. As the record will clearly show, I’m nothing special. There will never be any stars stacked upon my shoulders, nor a ticker-tape parade tossed in my honor. I started my career as a private in the infantry, lapped up another 20 years of armor and cavalry officer assignments, and I depart it as a space operations officer. At the end of the day, I’m just proud and lucky to have served as long as I have with members of what I like to call “The Real Top 1 Percent Club.” Who am I out of uniform? Well, in about five months, I guess I’ll find out. In the interim, I’ll describe myself as a father of three great kids, a general staff officer, and a lover of diving, sailing, riding motorcycles, shooting, and the occasional pub crawl (but not necessarily at the same time).

When it comes to leadership, can you describe the difference in approach when it comes to leading an office staff as opposed to being in the field leading a unit of soldiers or “fellow tankers” into combat? This is a great question. I suppose the irony of it is that there really shouldn’t be a difference in the two. This is one of the underlying themes of the book: don’t forsake your many years on staff by choosing not to lead or to “lead less” while serving in such a capacity. I encourage us all to employ the same fundamentals of leadership we would apply with a guide-on in our hands to that staff of often unrecognized and neglected soldiers of all ranks as well.

Clearly, meeting your objective within an office environment and going home at 1800 is a lot different than providing orders to a unit of soldiers you want to return home safely. Can you describe the difference in approach? As a captain serving on brigade staff, there was a poster hanging in our shop with a picture of a dirty, tired soldier strapped down with gear and a caption that read, among other things, “He and his buddies will be the first to pay for your mistakes [staff officer].” Being on staff is far from glamorous, but you are still prosecuting the fight on behalf of your unit and its soldiers. Your weapons and tools may have changed, but the outcome of your actions is not decreased with your movement from the hatch of a tank to a comfy corner of the Tactical Operations Center. As staff guys, we need to keep things in perspective and realize the impacts of our actions — then prioritize, plan accordingly, and keep fighting.

What personal adjustments did you make? As much as I dreaded my first tour on staff, I entered the office with a somewhat ignorant assumption that I would have the flexibility to catch happy hour on a frequent basis. As it turned out, I rarely left the cubicle farm before my enviable peers waving those company guide-ons around at battalion. The often unsexy and unending workload of a staff officer and NCO is time-consuming and downright frustrating, and the necessity of getting it done can compromise and degrade your leadership philosophy into something as simple and demoralizing as “row well and live, staff trooper.” When I learned to prioritize, manage my time, delegate, empower my subordinates, and develop and lead my people versus just managing them, I think things improved for all parties involved.

Habits of leadership are usually picked up from those who’ve led you in the past. Can you identify some of the best unspoken advice (habits) you picked up on, that you use to this day? Sometimes our chronic desire to lead less on staff results in talented junior officers and NCOs bailing out of the service well before they truly understand how fantastic the Army really is. As mentioned earlier, this usually results from staff leaders with a “mission first, staff choagies never” mentality. I’ve served in staff capacities before where I started to count down the days until I could drop paperwork. On that same brigade staff as a captain, it was a new iron major, the operations officer, who came into our shop and interdicted my desire to get out by the example he set on a daily basis, and the genuine concern he exhibited for his subordinates. Sure, he was mission-focused, demanding and meticulous, but he was willing to accept risk by committing time to developing us junior officers, and allowing us to strike a work-life balance that kept morale buoyant and our heads in the game. “The Iron Major Survival Guide” is an amalgamation of lessons I’ve learned through trial and error myself, but also great techniques and tactics I’ve gleaned from a myriad of great leaders I’ve been lucky enough to serve with over the years.

I read your book as a series of must-know subjects giving big-brother advice — what to steer clear of, the appropriate ways to conduct yourself, opportunities to take advantage of, and how basic fundamentals will help you survive your time in the service. Given the opportunity, which chapter would you encourage a young specialist making that transition to corporal to read, and why? Although primarily designed to arm mid-grade officers and NCOs for the challenges of staff and beyond, this book can also serve as a great tool for those of any rank. Because let’s face it, whether you wear chevrons or oak leaves, you will probably end up on staff sooner or later, and probably for more years than you’d care to. It’s never too early to start building those basic habits that will enhance your success, and ultimately, that of your unit’s. I’ll submit that regardless of the increasing complexities of the chapters within, there is apropos wisdom for anyone at any stage of their military career.

From a historic standpoint (or a good movie), can you name one leader (past or present) that you have high admirations for, and what makes them stand out to you? The real-life Ridgeways, the fictional Sam Damons; hell, where do you start? OK, I’ll try something a bit different and approach this question from an iconic Hollywood character instead: Tom Hanks’ Ranger Captain John Miller, from “Saving Private Ryan.” In just under three hours of riveting film, the audience learns quite a bit about Capt. Miller. Among other things, he’s technically and tactically savvy, humble and tenacious. He cares for and knows his people well, overcomes adversity and fear, exhibits great character, builds consensus, listens to his NCOs and optimizes the talents and abilities of his troopers in vigorous pursuit of the mission. Plus, he handles a Thompson pretty well.

As a leader, you are always aware that your staff and soldiers are looking to you as a reflection of success. In any leadership position, what do you consider the most important characteristics that an effective leader should display and why (habits, traits)? I think it’s hard to label or rank-order one trait or characteristic over another in the quest for describing the perfect leader. It goes without saying that character is — or rather should be — nonnegotiable and fundamental for all military leaders. That being said, I would submit that many of us could stand to be a bit more humble. By doing so, we promote continual self-assessment and instigate a similar “trickle-down” philosophy among our subordinates and in our units, where making and identifying mistakes is just another opportunity to learn and get better.