Poseidon brings a taste of Greece to Wiesbaden 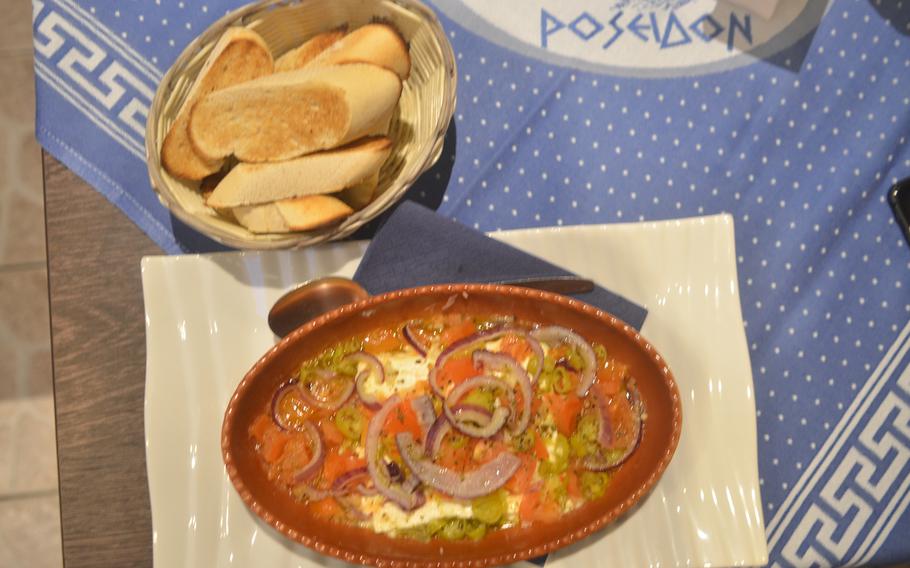 Saganaki pikant is a slice of feta cheese baked with peppers, tomatoes, garlic and onions served with toasted bread. (David Edge/Stars and Stripes)

Saganaki pikant is a slice of feta cheese baked with peppers, tomatoes, garlic and onions served with toasted bread. (David Edge/Stars and Stripes) The Leonidas and the 300 has three lamb chops, three soutzoukakia and gyro meat. It is served with potatoes, tzatziki and a Greek salad. (David Edge/Stars and Stripes) Named for the god of the sea, it’s fitting that with simple, welcoming decor, Poseidon Restaurant would remind me of the Greek islands.

Popular with both Germans and Americans, the restaurant sits at the edge of a quiet neighborhood about a half mile from Wiesbaden’s Aukamm housing area.

A quaint little place, it seats maybe 30 people at its wooden tables topped with squares of blue cloth with a traditional white meandros pattern tracing their borders. In nicer weather, a beer garden roughly doubles the dining capacity.

Ionic columns, statues of ancient gods and large bas reliefs, including one of Alexander the Great astride his horse Bucephalus, decorate the dining room. Hanging on the white stone walls or displayed in cutout nooks are images and models of the blue-domed houses of the Cyclades Islands.

From the array of appetizers, I chose the saganaki pikant, a baked slice of feta cheese with vegetables and toasted bread.

When the dish was served, its presentation was messy, with large chunks of onions and peppers. But the smells and flavors — an enticing blend of gooey feta, oregano, thyme and vegetables — took me back 20 years to my time in Greece and Turkey, and it left me wanting more.

For my main course, I ordered the Leonidas and the 300: three lamb chops, three soutzoukakia (Greek meatballs), gyro meat with potatoes, tzatziki (cucumber yogurt) and a Greek salad.

It was all very good with the notable exception of the gyro meat, which was hard and almost as inedible as the shields carried into Thermopylae by the Spartans the dish was named after.

The lamb chops were medium-well and roasted with rosemary, thyme and oregano. The tzatziki was creamy and the soutzoukakia had feta cheese mixed into them.

At the end of the meal, patrons are offered a complementary shot of ouzo, Greece’s anise-flavored national liquor, which the manager said helps digest your food.

The prices are reasonable, with plates ranging anywhere from 12 to 24 euros, and the portions are big, so you get your money’s worth.

Drinks: Beers from Greece and Germany, and a full bar with an extensive wine selection as well as fountain sodas, juice, water and coffee.

Menu: German and English. Most of the servers speak English, are friendly and very helpful.