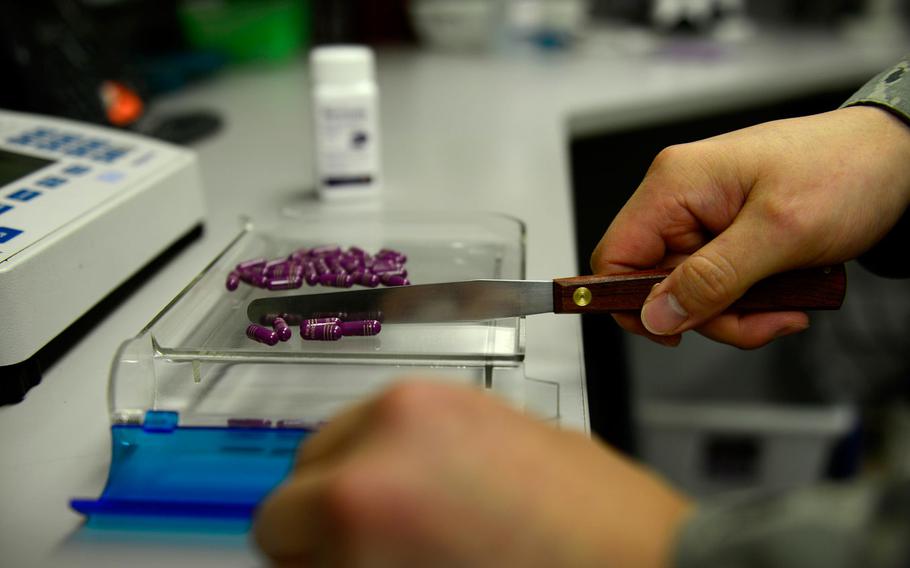 The prospect of higher out-of-pocket costs at these venues is expected to drive more beneficiaries to use on-base pharmacies where prescription drugs will continue to be dispensed free of charge.

Of fee increases set to take effect next week, said David W. Bobb, chief of the Defense Health Agency’s Pharmacy Operations Division, “what will have the greatest impact, not only on the program but on our beneficiaries, is the $7 co-pay that’s going to be implemented for generic drugs through the mail order program.”

For years mailed generic drugs had been cost-free to Tricare users.

Prescription fees will climb only “a small amount” for brand-name and non-formulary drugs procured off base, Bobb added. That’s why the new co-pay for mail order generics is most likely to affect beneficiary behavior. On-base pharmacies will become more popular. Retail outlets will fall more out of favor compared to base-run pharmacies and Tricare home delivery.

Prescriptions filled by mail are for 90-day supplies. Besides the new $7 co-pay for generics, mail order co-pays will rise from $20 to $24 for brand-name drugs on the military formulary and from $49 to $53 for non-formulary brand names.

Prescriptions filled in the Tricare network of retail pharmacies are for 30 days. Those co-pays will increase from $10 to $11 for generic drugs, from $24 to $28 for formulary brand-names and from $50 to $53 for non-formulary.

In some cases, survivors of active-duty servicemembers may be eligible for lower cost-share amounts, officials said. Brand-name drugs not on the formulary are not available at base pharmacies unless deemed medically necessary.

“Based upon historical experience with congressionally-mandated movement of brand-name refills from retail to mail order and military treatment facility [MTF] pharmacies, military pharmacies understand the potential for a workload shift from retail and mail order with the co-pay increases on 1 February,” said the Air Force Medical Service in a statement. “MTF pharmacies are prepared to absorb the increased workload and will monitor to adjust staffing and operations to meet prescription demand.”

Base pharmacies will “monitor prescription workload and adjust staffing and

“It is hard to predict patient behavior but … some movement of prescription volume from the mail program” is expected. “We will monitor and adjust resources to meet … demand as needed,” said Army Medical Command in its statement.

In fiscal 2017, prescription drug costs for the Department of Defense totaled $7.54 billion. That’s “net” costs after accounting for beneficiary co-pays, manufacturer refunds on drugs dispensed from retail outlets, and reimbursements from other health insurance plans that Tricare users might have. That total is 4.3 percent, or $312 million, higher than in 2016 and 14.6 percent, or $961 million, higher than department drug costs from 2008, or a decade earlier.

Bobb, the department’s top pharmacy official since last fall and a retired Air Force colonel, said drug costs have been contained in part because Congress has allowed co-pay increases that incentivized greater use of base pharmacies and mail order, which are more cost-effective than drugs dispensed from retail outlets.

Higher co-pays have changed patient behavior. In 2008, the department spent $4.22 billion, or 64 percent of pharmaceutical dollars, at retail drug outlets. By 2017, retail spending had fallen to $2.01 billion, or 26.7 percent, of overall costs.

During the same decade, on-base pharmacy usage saw only modest growth. The cost of drugs dispensed at military pharmacies climbed from $1.41 billion in 2008 to $1.76 billion last year. That’s 23.4 percent of total spending on pharmaceuticals, or two points higher than in 2008.

The size of the mail-order program, however, has more than tripled over the decade. In 2008, home delivery accounted for $954 million, or 14.5 percent, of department spending on medicines. Last year, DOD spent $3.76 billion on mail-order drugs, or 49.9 percent of total prescription drug costs.

The co-pay increases set for February will raise beneficiary costs about $140 million through the remainder of fiscal 2018. Congress said it approved the increases in part to free up dollars to continue a Special Survivor Indemnity Allowance that was set to expire this spring. The $310-a-month SSIA is paid to 60,000 surviving spouses of members who either died in retirement from service-connected ailments or injuries or died on active duty.

“We have looked at some data from the Kaiser Family Foundation [on] typical co-pays for other plans. The average for generic medication is $11 for 30-day supply whereas the new generic co-pay for DOD is $7 for a 90-day supply.”

Whether the new co-pay spurs many more beneficiaries to use base-run pharmacies will depend on several factors, including how far they must travel to use military pharmacists and how many drugs they take to make the trip worthwhile.

“We are still gathering data on what we think patient behaviors will be,” Bobb said. “We have looked at … civilian health plans when co-pays have been increased to try to predict. So far, we don’t really have a solid conclusion yet.”

In March 2014, about 500,000 beneficiaries age 65 and older with chronic health conditions were forced to have their maintenance drug prescriptions filled by mail order or on base rather than through local retail pharmacies. Since then annual retail drug costs for Tricare have fallen by $1.4 billion, or 41 percent.

“A lot of that went to mail order,” Bobb said.

The new co-pays will ensure the downward trend for retail continues. That’s fine with the Defense Health Agency, whose goal regarding prescription drugs is to provide “a very robust benefit while also being conscious of costs,” Bobb said.