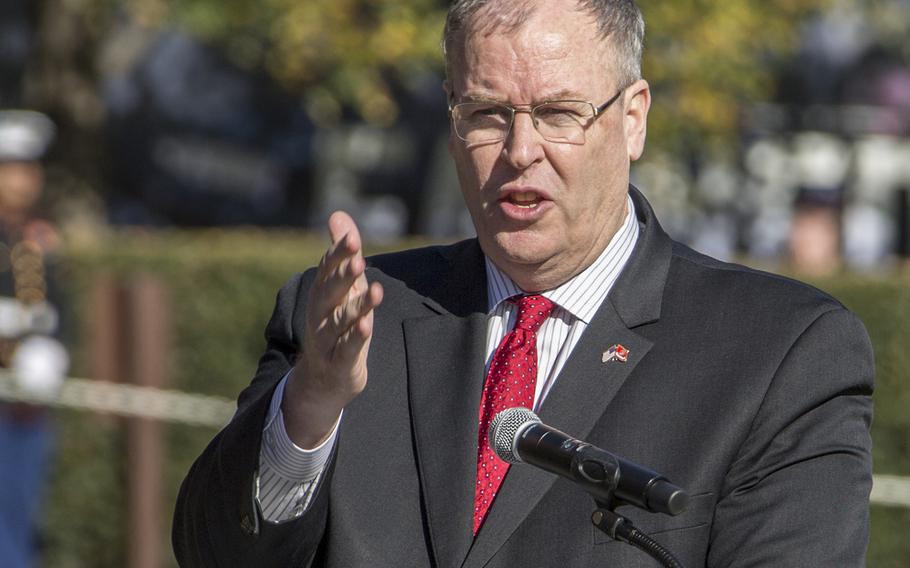 Robert O. Work, deputy secretary of defense, speaks during a wreath laying ceremony at Arlington, Va., on Nov. 10, 2016. Work issued a directive on Nov. 18, that gives guidance to Defense Department personnel who are now authorized to carry a personal firearm that is not related to their official duties. (Samantha K. Braun/U.S. Marine Corps)

Robert O. Work, deputy secretary of defense, speaks during a wreath laying ceremony at Arlington, Va., on Nov. 10, 2016. Work issued a directive on Nov. 18, that gives guidance to Defense Department personnel who are now authorized to carry a personal firearm that is not related to their official duties. (Samantha K. Braun/U.S. Marine Corps) 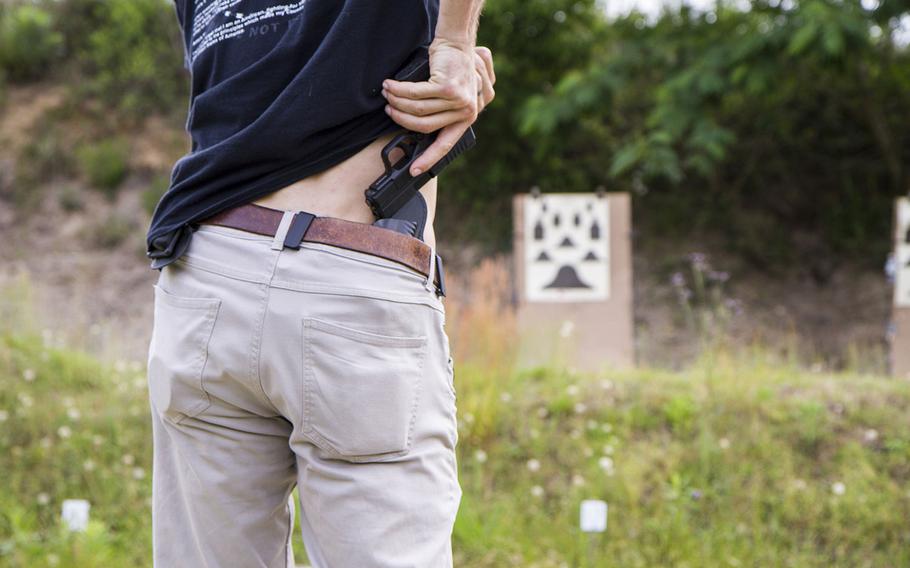 WASHINGTON — The Pentagon has cleared the way for servicemembers to carry privately owned firearms on Defense Department property, reversing a longstanding rule that barred personal weapons from its facilities.

Troops can apply for authorization to carry a firearm that is not related to their official duties, according to a Pentagon directive issued Nov. 18 by Deputy Defense Secretary Robert Work. The new order also describes the Pentagon’s policies for arming troops and civilian DOD personnel for official duties, such as law enforcement or security.

The directive is the result of a long debate about arming more troops on military installations in the wake of several shootings at Defense Department facilities in the past seven years that have left dozens dead.

Pentagon officials began reviewing the firearms policies in 2009, after a shooting rampage by an Army major on Fort Hood in Texas killed 13 people and injured 30. Last year, debate over arming more troops at military facilities heated up following the July 2015 lone-wolf terrorist attack on two military facilities in Chattanooga, Tenn., that left four Marines and a sailor dead.

The chairmen of the Senate and House Armed Services Committees -- Sen. John McCain, R-Ariz., and Rep. Mac Thornberry, R-Texas -- and others in Congress accused the military of dragging its feet in providing proper protections for servicemembers. But some high-level Pentagon officials argued against allowing troops to carry private weapons, and reminded commanders that they had the ability to arm additional troops for security purposes.

Army Chief of Staff Gen. Mark Milley testified in April that he did not believe troops should be authorized to carry non-DOD weapons at Defense Department facilities. He argued it was not necessary, citing the response by law enforcement to emergency situations, such as the 2009 Fort Hood shooting where police arrived within about eight minutes of the first shot.

“That’s pretty quick,” the Army’s top general told senators on Capitol Hill. “A lot of people died … but I am not convinced from what I know that carrying privately owned weapons would have stopped that individual.”

The Pentagon is moving forward with allowing servicemembers to request permission to “carry a privately owned firearm -- concealed or open carry -- on DOD property for a personal protection purpose,” Work’s 26-page directive reads.

National Guard troops not serving on federal duty and troops deployed to war zones are not affected by the directive.

Work’s order leaves specific requirements for granting troops permission to carry to the individual military services, but it stipulates permission can only be granted by commanders in the ranks of 0-5, lieutenant colonel, commander and above. Authorizations will be valid for 90-day periods or “as long as the DOD component deems appropriate.”

Troops must be 21 to apply to carry a personal firearm. Applicants must not have been convicted of or face pending charges under the Uniformed Code of Military Justice or in civilian court that would exclude them from possessing a firearm, and they must prove they’ve passed a government-sanctioned firearms training course.

Troops applying to carry a concealed personal weapon must comply with all local, state, federal or host-nation requirements, such as possessing a valid concealed-carry permit, according to the documents.

The directive also states that applicants must not carry a weapon when they are under the influence of intoxicants and must agree they could be held liable for “injuries, deaths, and property damage proximately caused by negligence in connection with the possession or use of privately owned firearms that are not within the scope of their federal employment.”

The new directive clarifies that commanders can arm their troops if they face a “general or specific threat of possible harm” based on their “official duties or status.” That would allow commanders at off-post facilities without dedicated Defense Department security or law enforcement personnel, such as recruiting centers, to arm personnel if they face a credible threat.