Pentagon to deploy another 900 troops to Middle East, extend Patriot missile battalion amid tensions with Iran 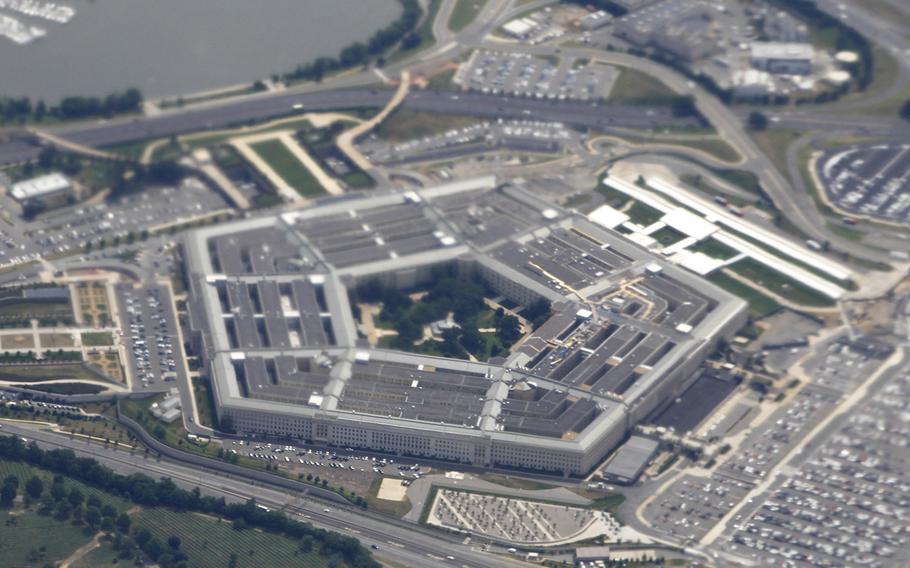 In this June 3, 2011, file photo, the Pentagon is seen from air from Air Force One. (Charles Dharapak/AP)

WASHINGTON – The Pentagon will send another 900 troops to the Middle East in the coming weeks in a move meant to bolster security for U.S. troops in the region amid heightening tensions with Iran, the Defense Department announced Friday.

Acting Defense Secretary Pat Shanahan notified Congress on Friday that he had authorized a request from U.S. Central Command to send the additional forces – an Air Force fighter jet squadron, an engineering element and combination of manned and unmanned intelligence, surveillance and reconnaissance assets – into the Middle East, he said in a statement. The Pentagon will also extend the deployment of some 600 soldiers from a Patriot missile battalion already serving in the region.

The move was approved Thursday by President Donald Trump following a meeting among top national security officials at the White House. The president, who had initially opposed sending additional forces, announced Friday that he had approved the new deployments as he left the United States en route to Japan.

Senior Pentagon officials said Friday that the move was meant only to protect American troops and assets serving in the region and not to flare tensions with Iran, which they accused of orchestrating a wide-spread campaign intent on undermining U.S. influence in the Middle East.

“While we do not seek conflict with Iran, we are determined to protect our forces and interests in the region from attack,” Vice Adm. Michael Gilday, the director of the Joint Staff, said Friday. “We will remain postured to respond.”

The new deployments come in the weeks after the Pentagon expedited the deployment of the USS Abraham Lincoln Carrier Strike Group into the Middle East and added a B-52 bomber strike group and a separate Patriot missile battery into the region. The additional fighter jets would respond in the case an attack against American troops was conducted, Gilday said. The engineers will help bolster physical security in locations where American are serving, including in Iraq and Syria. The Patriot battalion will provide defensive, surface-to-air missile launchers designed to shoot down short-range ballistic missiles, cruise missiles and aircraft. The drones and manned intelligence, surveillance and reconnaissance assets would be used to better track Iran’s military and its proxy forces across the Middle East.

The announcement was met with mixed responses from Capitol Hill.

"The information and warnings we have collected on Iran are not 'business as usual’,” he said. “It is important that we make clear to Iran, in words and actions, that they cannot attack us with impunity.”

Rep. Adam Smith, D-Wash., chairman of the House Armed Services Committee, rebuked the move. Smith said political leaders from both sides of the aisle have called for de-escalation and, at first blush, Friday’s move does not fit the bill.

Gilday told reporters at the Pentagon that classified intelligence had convinced him that Iran in recent weeks was plotting attacks on American troops in Iraq via its proxy militias. Nonetheless, Gilday did not provide specific information detailing those threats or evidence they were imminent. He said American intelligence officials were working to declassify some information to share safely with the public.

The admiral also fingered Iran for recent attacks in Iraq, including a rocket launched into Baghdad’s Green Zone on Sunday and in the Persian Gulf, where four oil tankers were sabotaged in recent weeks off the coast of the United Arab Emirates. Gilday said Iran’s Islamic Revolutionary Guard force was likely responsible for those attacks.

The United States now has some 60,000 to 80,000 troops operating within the U.S. Central Command area of responsibility, which includes the Middle East and southwest Asia, according to CENTCOM. That includes some 14,000 troops in Afghanistan, about 5,200 in Iraq and less than 2,000 in Syria.

Top U.S. officials, including Trump, and top Iranian officials, including Supreme Leader Ayatollah Ali Khamenei, have insisted they do not seek a war. Shanahan said Thursday before the meeting with Trump that the Pentagon’s actions were meant to limit the chance of “Iranian miscalculation.”

The heightened tensions have come in the weeks after the United States designated Iran’s Islamic Revolutionary Guard Corps an international terrorist organization, the first time it has designated a state-controlled military arm as such.

Iran’s leadership has made its own threats, declaring American troops in the Middle East terrorist and announcing it could scrap some of its commitments under the 2015 Joint Comprehensive Plan of Action, better known as the Iran nuclear deal, including increasing its uranium enrichment.

The United States left that agreement about one year ago, but European Union countries have remained committed to it.

Katie Wheelbarger, the acting assistant secretary of defense for international security affairs, said Friday that the U.S. goal with the Iranians is to drive them back to the negotiation table to strike an agreement. “We do not seek conflict with Iran,” she said. “Our policy remains an economic and diplomatic effort to bring Iran back to the negotiating table to encourage a comprehensive deal that addresses the range of their destabilizing behavior in the region.”