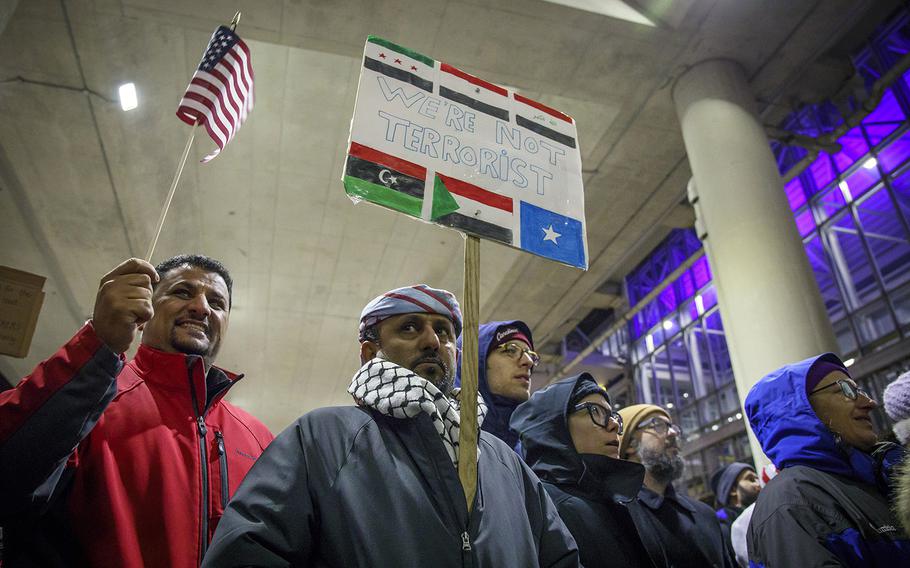 WASHINGTON — The Pentagon will advocate for visas for “proven” partners who have assisted U.S. forces in any of the seven majority-Muslim nations affected by President Donald Trump’s immigration ban – not just Iraq, spokesman Capt. Jeff Davis said Thursday.

The immigration ban was enacted Jan. 27 in an executive order signed by Trump at the Pentagon. It prevents citizens from Iraq, Somalia, Yemen, Iran, Sudan and Libya from entering the United States for 90 days. Syrian refugees are banned indefinitely. All other refugees are banned for 120 days.

The ban had a direct effect on the military. U.S. special operators have partnered closely with local forces on the ground in several of the affected nations as part of the U.S. war on terrorism and against the Islamic State group and al-Qaida.

“The majority of the people who are affected by this [executive order] would be the Iraqi people who have helped us, such as translators,” Davis said. “But there are people in other countries too who are impacted … who have demonstrated similar levels of action that have been in support of important U.S. military operations,” Davis said.

The U.S. recently conducted operations against the Islamic State militants in Libya, and U.S. special operators have worked with local forces supporting the Government of National Accord against cells of the Islamic State group there.

The U.S. has maintained a special operations presence in Yemen to assist the pro-government forces. On Sunday, a raid in Yemen that Davis said yielded “actionable” intelligence against al-Qaida led to the death of Navy SEAL Chief Special Warfare Operator William “Ryan” Owens.

The Department of Homeland Security said Tuesday that Iraqis translators and others who have obtained special immigrant visas based on their service to the U.S. in Iraq would not be impacted by the ban.

“We are pleased that the U.S. government has determined it is in the national interest to allow Iraqi special immigrant visa holders to continue to travel to the United States,” Davis said.

On Thursday, Davis said the department was working to identify people to advocate for who have been affected by the ban.

“We want to make sure that [their service] is taken into account when they face the U.S. immigration process,” Davis said. He did not say how many people may be affected, but added: “A lot of people who currently serve – a lot of our veterans – owe their lives to these people, literally.”