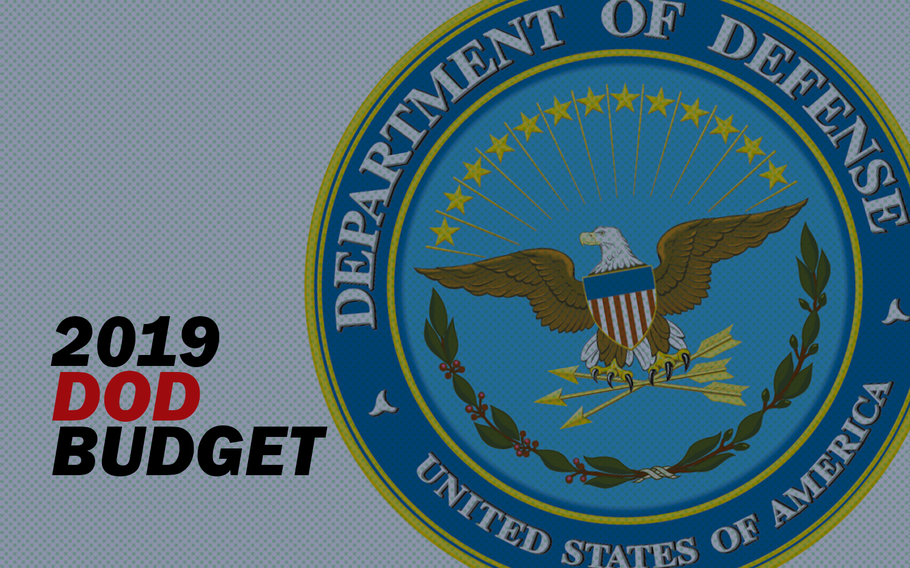 WASHINGTON — The Pentagon is seeking a 10 percent hike in funding, asking Congress for $686.1 billion next year to grow the size and might of the U.S. military while investing in modern hardware, primarily in response to China and Russia’s growing capabilities.

“Great power competition, not terrorism, has emerged as the central challenge to U.S. security and prosperity,” said David Norquist, the Defense Department comptroller. “The U.S. seeks cooperation with our competitors from a position of strength … [but] the U.S. must be prepared to compete, deter war, and if necessary, fight and win.”

It means the Pentagon needs more money, especially after operating through the current fiscal year under a continuing resolution, a stop-gap funding measure that appropriates money to the Pentagon at fiscal year 2017 levels – about $611 billion for the year, Norquist said.

The Pentagon’s request dwarfs the military budgets of China, Russia and other potential foes including Iran and North Korea, identified in recent strategy documents as the primary threats to America’s security. Norquist said Monday the proposed budget takes the initial steps to “restore and rebuild” the U.S. military, as President Donald Trump has pledged.

The budget represents a $74 billion increase over the Defense Department’s current funding. It calls for $617.1 billion in base funding and $69 billion for Overseas Contingency Operations, which pays for ongoing actions in war zones like Afghanistan, Iraq and Syria as well as reassurance operations in Europe. The request does not include national defense money for the Department of Energy and other agencies that contribute to the Trump administration’s overall national defense request of $716 billion.

It marks the second request under Trump, far surpassing the $639.1 billion his administration asked for last year, which drew criticism from Capitol Hill defense hawks who called for higher military spending.

The budget would also jump-start the Pentagon’s rebuild of its nuclear infrastructure, which it committed to do in the Nuclear Posture Review released this month. The request includes $7.77 billion in upgrades to U.S. nuclear programs, including $2.3 billion for its nuclear-capable B-21 Raider heavy bomber, expected to enter the force in the mid-2020s.

Troops would get a 2.6 percent pay hike, under the Trump proposal, its largest pay raise in nearly a decade.

The budget request also calls for increases to active duty force sizes, including about 4,000 in the Army and Air Force, and about 7,600 Navy sailors.

Operational requests include $46.3 billion for continuing warfighting costs in Afghanistan, where nearly 15,000 American troops are deployed to train, advise and assist Afghan security forces and conduct counterterrorism operations. Despite increasing forces in Afghanistan by some 3,000 troops, the funding request represents a slight decrease over current funding for Afghanistan.

However, the Pentagon increased the amount of money it is requesting for Operation Inherent Resolve in Iraq and Syria and for operations in eastern Europe, where it is focused on dissuading Russian aggression.

Anti-Islamic State operations in Iraq and Syria get a $2.3 billion boost over fiscal year 2018, even as ISIS has lost nearly 100 percent of the territory it once controlled there. Norquist said the boost will allow the U.S. to retain troops in those countries to help ensure the terrorist group does not return to prominence.

Hurdles remain for the Pentagon to receive the funding it is requesting. Even after lawmakers reached a deal to lift mandatory defense spending caps to clear the way for a $1.4 trillion, two-year military funding plan for the 2018 and 2019 fiscal years, they have yet to pass a full Pentagon budget.

To follow through on the plan, lawmakers will have to issue an appropriations plans by the March 23 deadline of the new temporary stopgap bill.

Congressional defense hawks have said the funds will jump-start the demands of the new National Defense Strategy, which shows the U.S. military must prepare for the growing great power threats of Russia and China.

The military will be one step closer to following through on its 2018 spending plans if it gets an appropriation plan approved in the coming weeks.

Until then, the Pentagon has had to make 2018 and 2019 budget plans without permanent funding in place.

Norquist said Monday that he was certain lawmakers would finally appropriate the Pentagon funds.

“I have great confidence in Congress’ ability to move forward with this,” he said. “It’s not easy. I know it’s a heavy lift. The staff [on the Hill] is very dedicated. I look forward to making this possible.”