Pentagon: Russian anti-aircraft systems in Syria a concern but not a threat 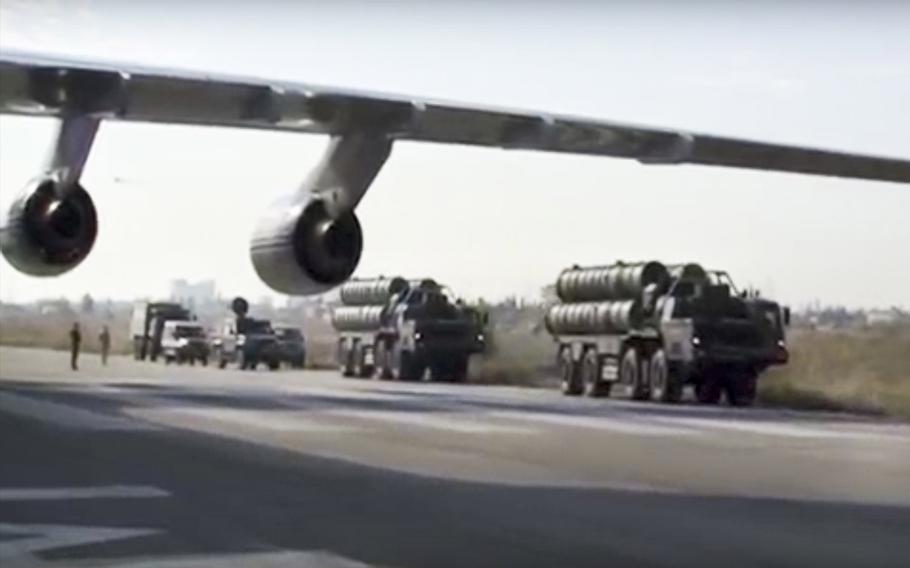 A video screen grab shows Russian S-400 air defense missile systems on the runway at the Hemeimeem air base in Syria in November 2015. Activists in Syria said Thursday, Dec. 3, that Russian forces are expanding on a second air base in Syria. (Russian Defense Ministry Press Service pool photo)

“So far it’s not had any impact on our operations, but it’s certainly something we are aware of,” Pentagon spokesman Navy Capt. Jeff Davis said Monday.

The Russians said they moved S-400 surface-to-air missile systems to their Latakia air base on the country’s west coast Nov. 25 in response to a Turkish F-16 shooting down a Russian Su-24 jet one day earlier on the Syria-Turkey border.

The Russians also announced they would arm their aircraft with air-to-air missiles, a development also confirmed by Davis on Monday. But the Pentagon said it did not expect such weaponry to thwart its ability to bomb Islamic State militants.

The addition of Russian anti-aircraft missiles could complicate the nearly 5-year-old civil war in Syria. The missiles add nothing in the fight against the Islamic State group, which Russia has claimed is a main target of its airstrikes in Syria, Davis said.

The S-400 can target aircraft within 250 miles, according to Russia Today, a state-owned news service. That range covers about 75 percent of Syrian airspace as well as most of southern Turkey, including Incirlik Air Base where two dozen U.S. warplanes are stationed primarily to launch attacks on the Islamic State group.

The Russian government said the deployment of the S-400 systems was a force protection measure, according to Russia Today. Davis said Monday that the United States did not view it as a threat.

“We have no reason to believe that coalition operations against [the Islamic State group] would face any particular threat from Russia, as there is no reason for either side to be targeting each other,” Davis said, adding later, “We are not at war with Russia.”

The United States and Russia in October signed an agreement to ensure professional conduct and communication in the skies over Syria, but the two countries do not coordinate their operations in the country.

U.S. officials have continuously called for Russia and Turkey, a key NATO ally, to ease tensions since the Nov. 24 incident. Turkey said the Russian jet violated its airspace and was shot down only after receiving 10 warnings to turn around. Russia has denied its plane crossed into Turkey or that it was warned of the impending fire. Davis said Monday that evidence supports Turkey’s account of the event.

“Everything we’ve seen is consistent with what Turkey has said,” he said.