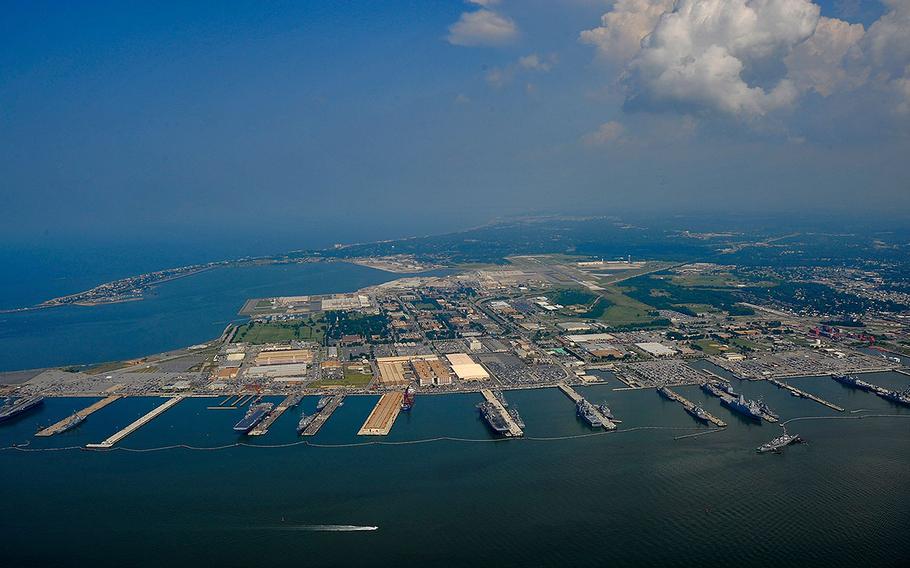 In an April, 2015 file photo, the Taj at Joint Base San Antonio-Randolph in Texas is bathed in teal lighting in recognition of Sexual Assault Awareness and Prevention Month. (U.S. Air Force)

• Read the full report at the end of the story.

The Defense Department for the first time on Friday made public the number of sexual assault reports taken at each of its installations from 2013 through 2016. The new data show a consistency among the installations handling the most sexual assault cases year-to-year, which include some of the military’s largest posts.

In addition to Naval Station Norfolk, the Navy’s largest base, the Army’s Fort Hood in Texas, Joint Base San Antonio in Texas, Joint Base Lewis-McChord in Washington, Naval Base San Diego, and the Marine Corps’ Camp Lejeune in North Carolina and Camp Pendleton in California have regularly received the highest tally of sexual assault reports in recent years.

The Pentagon cautioned that the numbers do not necessarily indicate the reported sexual assaults occurred at those facilities nor do they indicate a crime was actually committed. For example, sexual assaults that occur during an overseas deployment are often only reported once servicemembers have returned to their home installations, the Pentagon’s Sexual Assault Prevention and Response Office wrote in a report detailing the new data.

Pentagon officials for years had declined to provide the information to reporters requesting it through official channels. However, it recently determined it could release the data without harming victims.

Sexual misbehavior has exploded into a major issue throughout American society following a surge in complaints by women against powerful figures in Hollywood, politics and journalism..

Stamping out sexual assault in the military has been among the chief priorities for top Pentagon officials for years. In fiscal year 2016, the Pentagon reported that more servicemembers were reporting incidents of sexual assault while the total number of those assaults was believed to have fallen slightly.

Servicemembers reported 6,172 cases of sexual assault in 2016, compared to 6,083 the year before, according to data the Pentagon released in May. However, reported cases in 2016 were less than half of the DOD-estimated 14,900 incidents among military members last year. The estimated numbers are the result of anonymous surveys taken each year by the force.

Naval Station Norfolk last year received 270 reports of sexual assaults, down from 291 the prior year. Joint Base San Antonio received the second highest number of reports in 2016 with 211, an increase from 198 in fiscal year 2015.