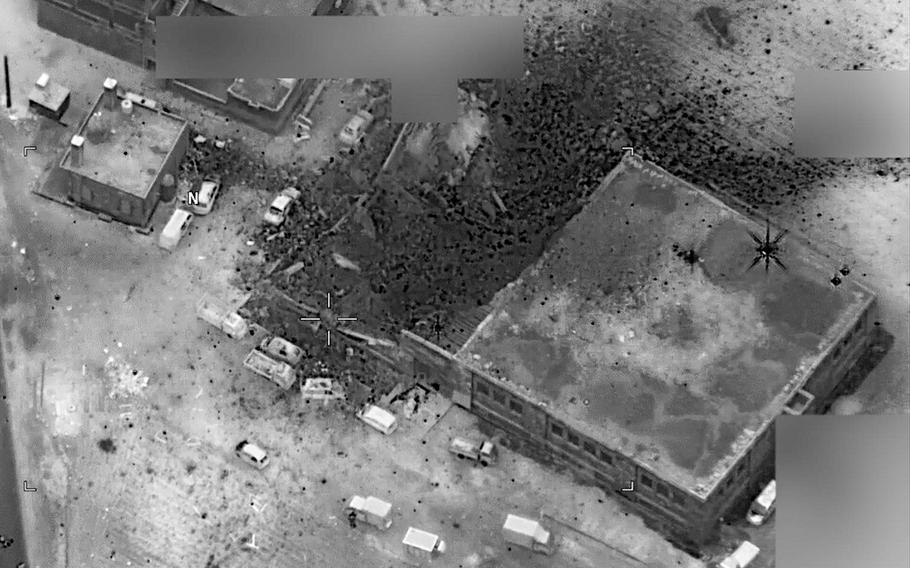 An aerial image shows the results of a U.S. airstrike in Jinah, Syria. Pentagon officials said Friday, May 5, 2017, that they are assessing how U.S. operations against the Islamic State could be affected by new weapons-free zones enforced in western Syria by Russia, Iran and Turkey. (Defense Department)

WASHINGTON — Pentagon officials said Friday that they are assessing how U.S. operations against the Islamic State could be affected by new weapons-free zones enforced in western Syria by Russia, Iran and Turkey.

Portions of southern Syria, Idlib province and portions of Aleppo, Homs, Latakia and Hama provinces would become protected areas where the use of “any kind of weapons, including aerial assets, shall be ceased,” according to an agreement signed Thursday by Russia, Turkey and Iran. The agreement also states the three countries will guarantee the “security zones” are enforced.

Latakia has a Russian air base where Syrian President Bashar Assad moved jets following U.S. cruise-missile strikes on Sharyat air base in early April. Aleppo, a former anti-government stronghold, had been under siege for months until it fell to Syrian forces in December.

Navy Capt. Jeff Davis, a Pentagon spokesman, emphasized the areas identified in the agreement are not the parts of Syria where the U.S.-led coalition against ISIS is now focusing its operations.

“Our focus of effort is on ISIS and ISIS is well to the east of what I have seen talked about [in the agreement],” Davis said.

However, the United States has conducted airstrikes against ISIS in Idlib and Aleppo provinces in recent months.

A U.S. defense official who spoke on the condition of anonymity said a delegation representing forces opposing the Assad regime who were part of the meeting Thursday in Turkey refused to sign the security-zone agreement. The U.S. official said, without opposition signatures, it raises the question about whether the agreement is in effect.

Davis said he would not speculate on how the agreement could affect future U.S. air operations in Syria.

“We are not able to talk about this right now,” he said.