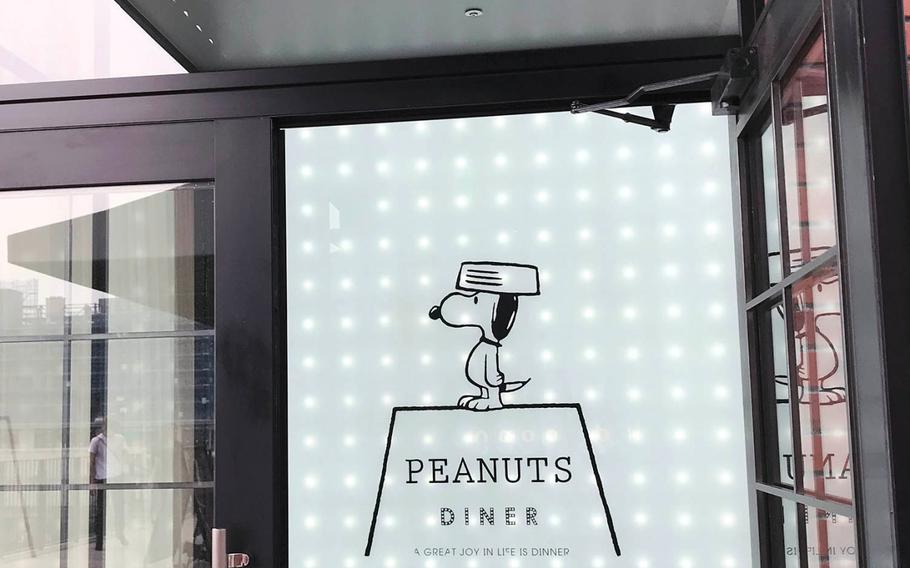 Buy Photo
A drawing of Snoopy welcomes customers to the Peanuts Diner, a restaurant inspired by the comic strip "Peanuts,' in Yokohama, Japan. (Hana Kusumoto/Stars and Stripes)

Buy Photo
A drawing of Snoopy welcomes customers to the Peanuts Diner, a restaurant inspired by the comic strip "Peanuts,' in Yokohama, Japan. (Hana Kusumoto/Stars and Stripes) 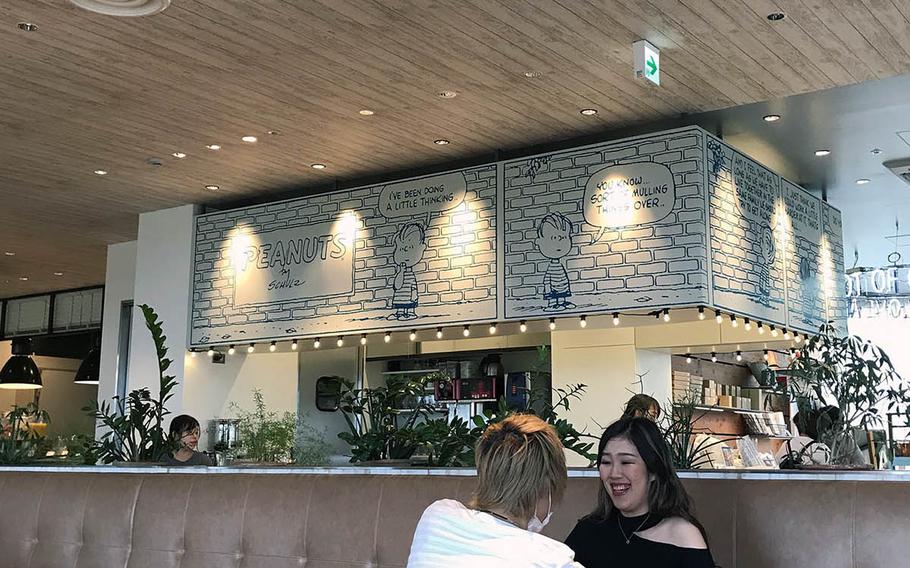 Buy Photo
Customers enjoy lunch July 3 at the Peanuts Diner, which is filled with decor inspired by the comic strip, "Peanuts," in Yokohama, Japan. (Hana Kusumoto/Stars and Stripes) 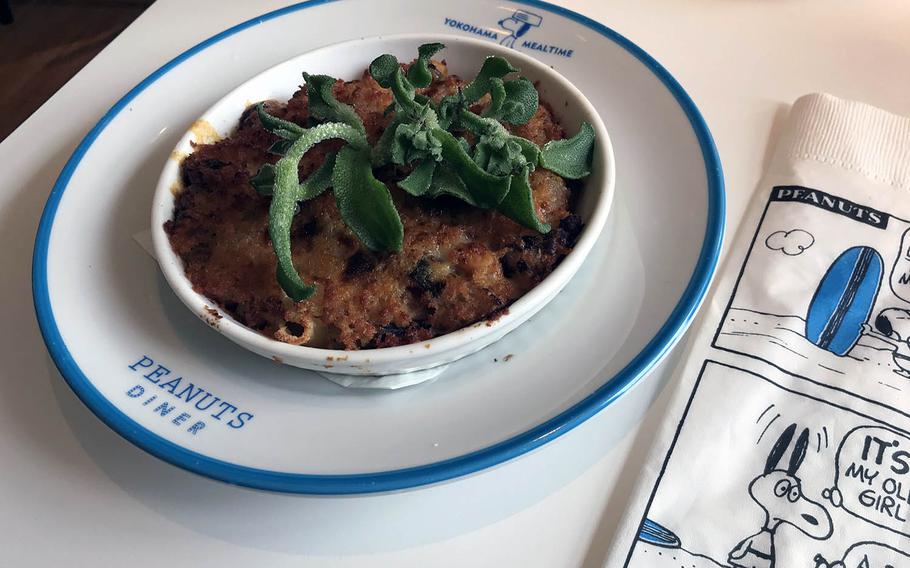 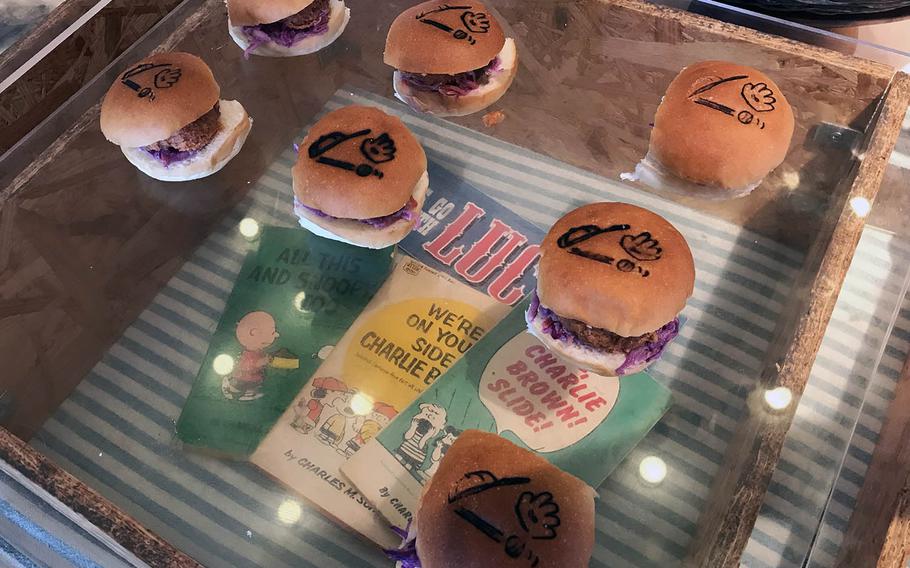 Buy Photo
Many menu items at the Peanuts Diner have images from the comic strip, including this pulled pork sandwich at the Peanuts Gang's Slider Bar. (Hana Kusumoto/Stars and Stripes)

Lucy’s homemade lemonade, Marcie’s waffle chicken and chocolate brownies named after Charlie Brown: Every menu item, every decoration and even the paper napkins at the Peanuts Diner adhere to the “Peanuts” theme.

The restaurant, at the waterfront shopping area in Yokohama, opened two years ago and was inspired by the comic strip made famous by Charles Schulz.

At the entrance, a drawing of Snoopy standing on his doghouse wearing his feeding bowl on his head welcomes customers. Next to the entrance is a souvenir shop that sells such items as cookies with various Peanuts characters printed on them, or plates and bowls bearing Snoopy’s image.

The restaurant has large windows that allow in lots of sunlight. Its decor was modeled after a beachside diner in California, where Schulz the cartoonist lived and worked.

When I went there on a weekday for lunch, the restaurant was half-full of young couples, mothers and their small children. The kids were posing in front of large paper panels that had figures of Charlie Brown, Snoopy, Linus and Snoopy’s red doghouse.

“Peanuts” comic strips are drawn on the restaurant walls and shelves are filled with old “Peanuts” toys.

That theme is repeated throughout the restaurant. You can find the “Peanuts” characters under the glass tabletops on the buffet table or on coasters and forks. Even the light cover hanging from the ceiling had a zigzag line drawn just like the one on Charlie Brown’s shirt.

The lunch menu consisted of a handful of dishes, including several types of hamburg steak (a Japanese dish of a ground beef patty covered with a demi-glace sauce), pasta and soup.

The meals are named after the “Peanuts” characters. Marcie’s waffle chicken is fried chicken served over a waffle with maple syrup sauce.

Joe Preppy’s bread bowl clam chowder was named after Snoopy, who took on various personas in the comic strip, including the Red Baron, Joe Cool and Joe Prep. The classic soup dish suits Joe Prep, who dressed in a classic jacket.

For an additional fee, diners who order a main dish may add a trip to the Peanuts Gang’s Slider Bar, which is a buffet that includes salad, small burgers, appetizers, fries, drinks and dessert.

The hamburg steak was tasty and came with rice and french fries served in a warm miniature frying pan.

The chili con carne casserole was what I imagined, chili served over penne and then baked with cheese on top. But the chili in the casserole had chickpeas with kidney beans and a strong, fresh tomato taste rather than a chili taste. The crispy cheese with breadcrumbs on top of the casserole was very good.

The slider bar consisted of various dishes, such as miniature burgers, french fries, corn dogs, corn with Cajun sauce and coleslaw. The burgers had mashed pumpkin and pulled pork sandwiched between buns. I enjoyed the dessert-like burgers with peanut butter and jelly or chocolate and banana. The buffet also had fresh fruits and a white chocolate fountain, in which you may dip marshmallows or pretzels.

The lunch menu also had various desserts and drinks. Desserts included a chocolate brownie sundae and apple pie served with vanilla ice cream. Milkshakes and homemade lemonade are also available. We were way too full to try any of the desserts or drinks, but all of the pictures on the menu looked delicious.

We arrived in the later hours of lunch time, so the restaurant staff was slow to refill some of the plates at the buffet table and the servers did not come to pick up empty plates from our table.

The Peanuts Diner had very relaxing atmosphere and my children enjoyed looking for the “Peanuts” characters throughout the restaurant. If you like the comic strip, it is definitely an enjoyable place to go.