'Only the guys who have been blown up can understand' 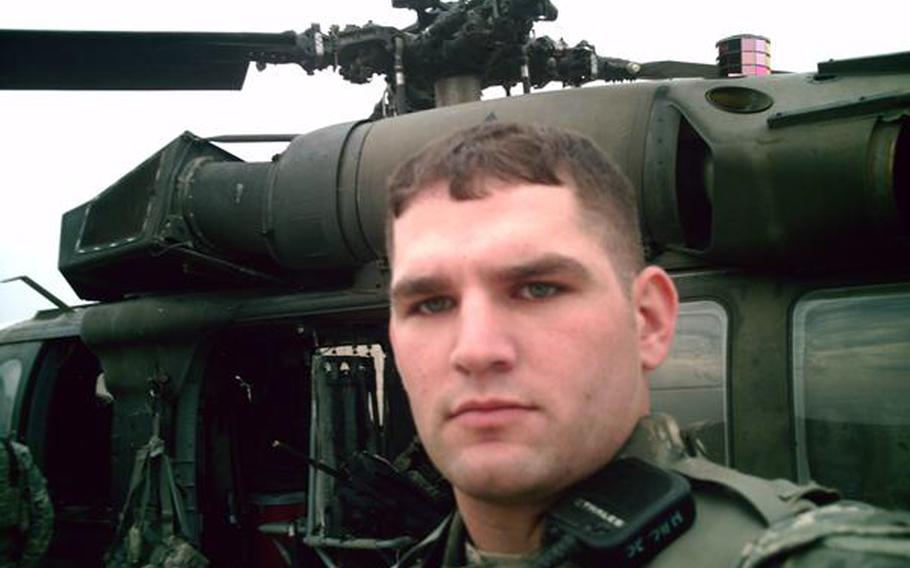 Army Cpl. David McKimmey received the Bronze Star for valor during combat in Iraq in 2007. McKimmey was recognized for bravery in connection with his efforts to save comrades after a roadside bomb blew up his vehicle just north of Balad. (Courtesy David McKimmey)

Army Cpl. David McKimmey received the Bronze Star for valor during combat in Iraq in 2007. McKimmey was recognized for bravery in connection with his efforts to save comrades after a roadside bomb blew up his vehicle just north of Balad. (Courtesy David McKimmey) Army Cpl. David McKimmey, despite suffering numerous injuries from an roadside bomb blast in Iraq that included burns, a broken leg and crushed vertebrae, pushed past the pain to help fellow soldiers in the aftermath of an attack in Iraq in 2007. He received the Bronze Star for valor for his actions in combat. (Courtesy David McKimmey)

Burned, battered and dazed from the roadside bomb blast that shot him out of his Humvee, Cpl. David McKimmey saw his comrade slouched in the distance.

They were on a stretch of bad road, just north of Balad. It was Sept. 5, 2007, and the Iraq War was still raging. During the tour, where the threat of running over an improvised explosive device struck fear in the hearts of many troops, the soldiers in McKimmey’s squad had a pact to not leave anyone behind.

So when McKimmey saw a fellow soldier on the other side of the road, unresponsive and possibly dead, the Wyoming native went after his friend.

Even though that meant crawling through fire.

“My gunner — who I switched seats with earlier — I’d seen him next to the truck, and the truck was surrounded by fire,” said McKimmey, whose injuries that day forced him out of the service.

It was a 12-foot radius of fire, and McKimmey thought he saw the soldier moving. As the corporal stood up to make his way to the soldier, McKimmey fell to the ground, his broken right leg unable to carry him.

“In my mind I was going to try and save him,” McKimmey said.

The only way to get there was to crawl across the road of melting asphalt.

“That’s where the burns from my hands came from. I was trying to crawl toward him,” McKimmey said. “I just kind of [made my peace] and I started going in for him. That’s when people came to stop me from going into the fire.”

About that time, ammunition inside the Humvee exploded, setting bullets and grenades ablaze. As rounds whizzed by, soldiers ran for cover.

“It sounded like war,” McKimmey said. “Everything just started going off. Basically, they took off and went for cover. I just kind of laid there.”

He saw his buddy sitting upright but motionless on the other side of the road and realized his comrade was probably dead.

“But as brothers in arms we made a pact we wouldn’t die alone,” McKimmey said. “So I started crawling back for him.”

As he inched toward the soldier, he took a stray round in his arm from the ammunition exploding out of the truck.

McKimmey, who had survived being launched out of his vehicle 20 to 30 feet in the air, remembers thinking it would be an absurd way to die: stray bullets from your own arsenal.

“I can’t explain why things like that run through your head,” he said.

But he kept inching across the road.

“I was reaching for him, my hand was in the fire, and that’s when they came in to get me,” McKimmey said. “They were stopping me from dying ... They got me out of there finally, convinced me he couldn’t be saved.”

Meanwhile, another soldier who made it out of the exploded truck and had just regained consciousness was yelling for McKimmey.

“He was disoriented, in a lot of pain and was hollering for me,” he said. “They dragged me over to where he was. He was slipping in and out of consciousness.”

With burned, mangled hands, a broken leg and burns covering his face, McKimmey began to administer the IV.

“For some reason, no one was really quite ready for it,” McKimmey said. “Everybody froze for a moment, so in the midst of trying to calm him I did first-aid the best I could.”

The injured soldier made it out alive.

For his actions on the battlefield that day, McKimmey received the Bronze Star with “V” device for valor in an October 2012 ceremony.

Today, in “nowhere land, Wyoming,” McKimmey tends to a small farm in the rural community of Torrington, his hometown, and spends time with his fiancée and young daughter while coping with the effects of post-traumatic stress disorder and traumatic brain injury.

“I take it one day at a time,” he said. “It’s difficult. I still have the psycho nightmares every night, but I have a family that is super supportive. They’ve always been there for me.”

He also keeps in touch with some of the guys who survived the blast.

“You can talk to family and friends and psychiatrists, but nobody really understands what you’ve gone through,” McKimmey said. “Only the guys who have been blown up can understand.”

He said he still isn’t sure what kept him going that day in Iraq, or how he continued on with a broken leg, crushed vertebrae and burns all over.

“I guess it’s the power of the human mind and the will to save a friend,” he said. “There’s no reason anyone should want to endure that kind of pain. But for some reason, soldiers will do whatever it takes.”