Once declared dead in Korea, Hernandez full of fire at 82 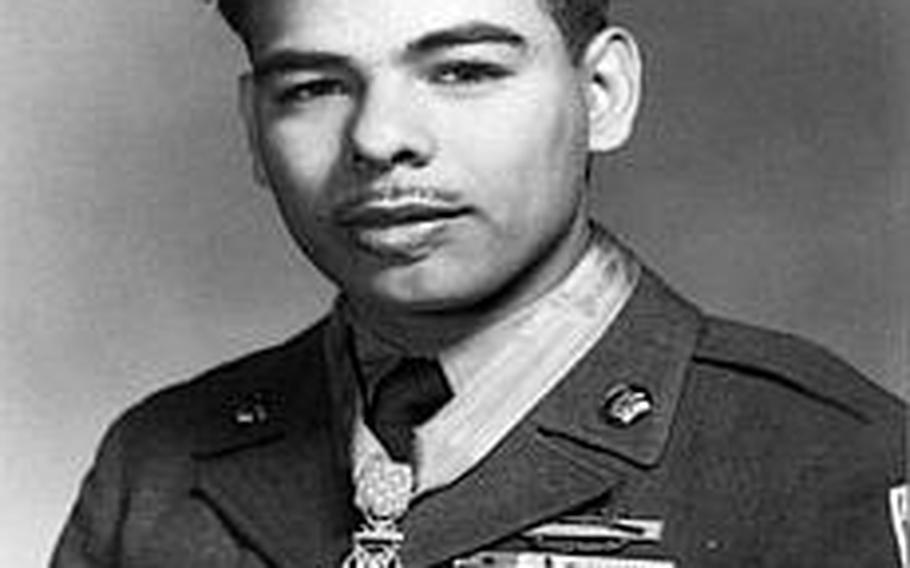 Rodolfo "Rudy" Hernandez, Korean War-era Medal of Honor recipient, as shown soon after receiving the award. Despite sustaining numerous wounds, Hernandez' rifle and bayonet attack gave his unit the time it needed to establish a defense against a much larger enemy unit. ()

In the winter of 1951, there was no greater luxury in Korea than heat.

Bombs had consumed most of the trees, and there was little else left to burn during the first year of the Korean War. Tens of thousands of Koreans would perish from exposure and starvation.

America’s fighting men had it a little better. They had rations and clothing. They still suffered through Siberia-like temperatures and rampant frostbite, all while fighting an influx of hundreds of thousands of Chinese soldiers who had forced them into a retreat.

The 187th Airborne Regimental Combat Team had jumped into North Korean territory in October, and bore the brunt of the cold and the retreat for many months.

By the end of May, its soldiers had reason for optimism. The temperatures rose and the Chinese Spring Offensive had stalled along the 38th parallel, the present-day border separating north from south.

On May 31, Cpl. Rodolfo “Rudy” Hernandez and Company G were dug in at Hill 420, about 15 miles south of the current border near the present-day village of Wontong-ri.

It was about 2 a.m. when Hernandez, 20, and his foxhole mate first heard the North Korean bugles. A larger force converged on the company’s position, pounding the hill with heavy artillery and following up with a small-arms assault.

Hernandez began firing and was quickly wounded by the incoming fire and grenades. When a cartridge in his rifle ruptured, all he had left were a few grenades and a bayonet. That was all Hernandez needed to buy his comrades some time.

Hernandez fixed his bayonet and charged, killing six enemy fighters before losing consciousness from grenade, bayonet and bullet wounds, according to his Medal of Honor citation. It stunned the enemy just long enough to allow the soldiers behind him to reload, regroup and counterattack.

Company G held its ground through the early morning. At daybreak, a medic named Keith Oates found Hernandez lying on the ground, riddled with wounds and near death, according to news reports. Oates bandaged him and sent Hernandez downhill to an aid unit.

When Hernandez arrived, he was declared dead. The medics were ready to zip him in a body bag when one of them saw his finger move.

A month later, a semiconscious Hernandez woke up in a South Korean hospital.

“I couldn’t talk for several months,” Hernandez told Stars and Stripes at a Medal of Honor convention last year in Hawaii. “I couldn’t walk from the shrapnel wounds.”

Hernandez was moved to Letterman Hospital in San Francisco. Doctors implanted a plastic plate where an artillery shell had blown off parts of his skull and brain, according to Hernandez’s official biography.

After several months, Hernandez would learn to walk again. He was able to stand when President Harry Truman awarded him the Medal of Honor on April 12, 1952, though he could not remember doing the things that Truman read in the citation.

Hernandez continued with several more years of rehabilitation. Once sufficiently recovered, he took a job at the Veterans Administration, counseling other wounded veterans.

Now 82, Hernandez has difficulty getting around and his speech is labored.

Nevertheless, the limitations of age have not robbed him of his passion. Asked if he had anything to say about today’s servicemembers in combat zones, his eyes widened. Hernandez inhaled deeply, and his voice found a deep reserve of timber and volume.

“Keep on fighting!” he said.