On the centennial of World War I and beyond, striving to keep sacrifices alive 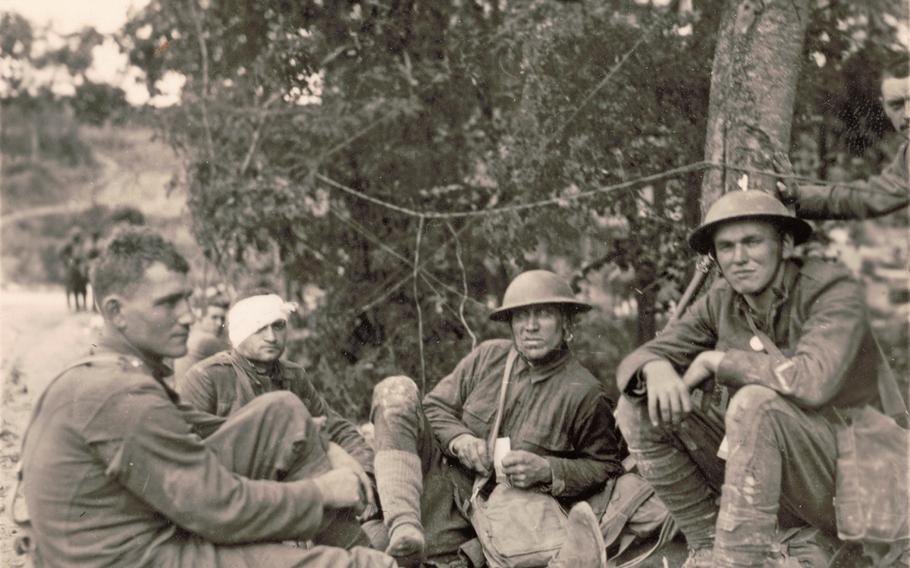 Allied soldiers, one with a bandaged head, sitting on the ground during World War I. (Courtesy of Library of Congress) Three British soldiers in trench under fire in August 1916, during World War I. (Courtesy of Library of Congress) 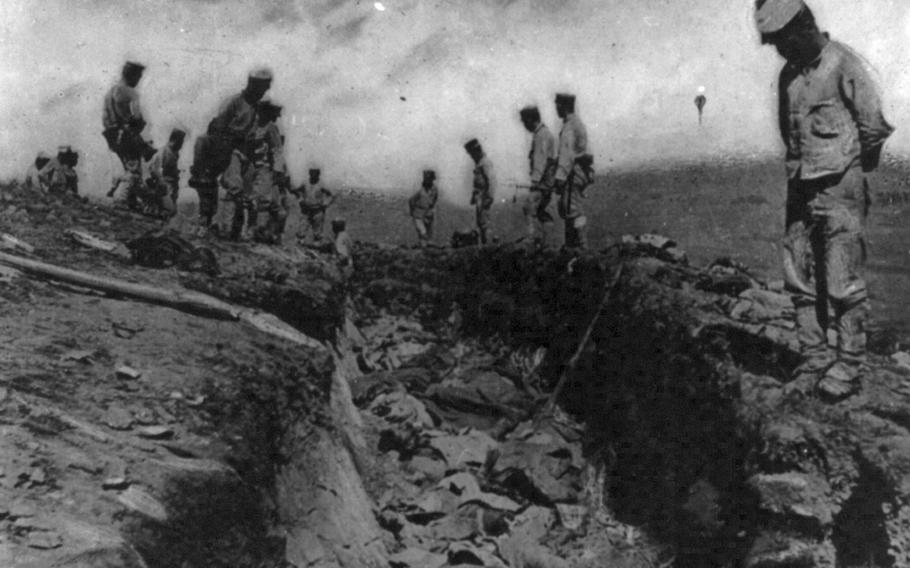 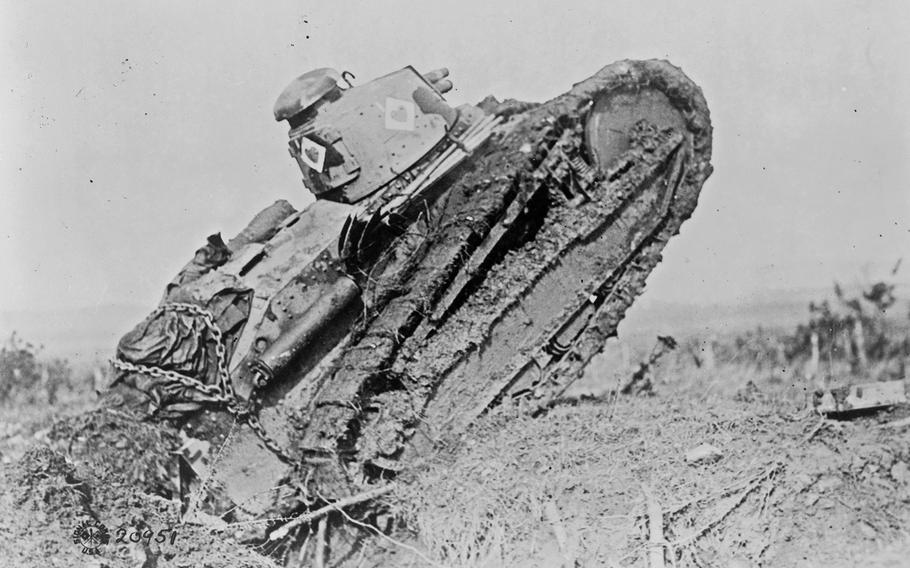 A tank ploughing its way through a trench and starting toward the German line, during World War I, near Saint Michel, France. (Courtesy of Library of Congress) Buy Photo
Michael Neiberg, author and Chair of War Studies in the Department of National Security and Strategy at the United States War College, fields a question during a World War I question and answer session held in Washington on Thursday, March 29, 2018. (Michael S. Darnell/Stars and Stripes) Buy Photo
Retired Gen. Richard Myers, the 15th Chairman of the Joint Chiefs of Staff and current president of Kansas City University, responds to a question during a World War I question and answer session held in Washington on Thursday, March 29, 2018. (Michael S. Darnell/Stars and Stripes) 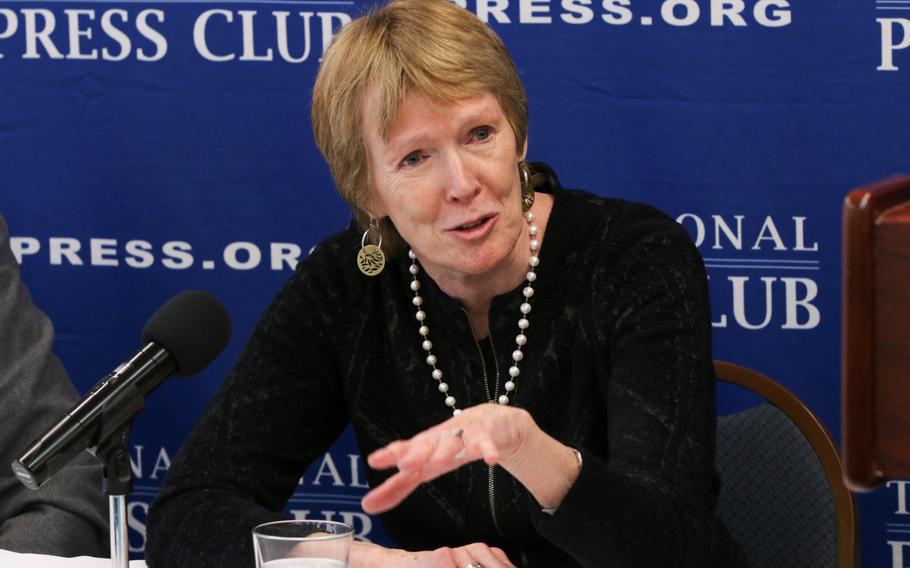 Buy Photo
Margaret MacMillan, professor of history at the University of Toronto and author of several historical books, including best-seller "Peacemakers: The Paris Peace Conference of 1919 and Its Attempt to End War," speaks during a World War I question and answer session held in Washington on Thursday, March 29, 2018. (Michael S. Darnell/Stars and Stripes)

WASHINGTON — There are no soldiers alive who can recall the sound a M1903 Springfield rifle makes as it spits lead across a muddied battlefield.

Likewise, there are no mothers left to cry over sons who died in the trenches in Verdun, France, or in the icy waters off Denmark’s Jutland.

The generation that, for a time, believed it was fighting the “War to End All Wars,” has long since passed. Their tombstones, memorials and artifacts are scattered across the world — solemn reminders that victory is fleeting.

The World War I Centennial Commission – made up of a dozen historians, educators, artisans and military veterans – and the National World War I Museum and Memorial in Kansas City, Mo. are doing their to ensure that their sacrifices won’t be forgotten.

Members of the commission and other experts spoke March 29 at the National Press Club about the enduring impact of the war and the parallels between it and the modern political landscape.

“The rapid change in information technology [was] a problem in 1914, as it is today; the beliefs and actions of non-state actors is a problem; terrorism; finance as a coercive tool,” said panelist Michael Neiberg, chairman of war studies at the United States Army War College. Those similarities make education on past conflicts so vital to modern diplomacy.

“There are also ways, I hope, that if we understand what happened 100 years ago, you can at least see the warning signs coming,” he said.

The lessons of historic warfare aren’t lost on the modern military.

“There are many, many lessons to be learned from World War I,” Army Chief of Staff Gen. Mark Milley said during November’s groundbreaking for what could become the National World War I Memorial in Washington. “But if there is one lesson most of all to learn (it) is the lesson to vow to never let it happen again.”

That, said commission member Matthew Naylor, is why memorials – like the one proposed for Pershing Park in Washington – and museums are so important.

“We must remember those whose lives were lost,” Naylor said at Thursday’s roundtable. “We must also remember their courage and valor ... it informs us.”

Naylor is also the president and CEO of the National World War I Museum and Memorial, which hosted Thursday's event in Washington. That museum was an expansion of the Liberty Memorial – one of the earliest monuments to World War I in the U.S., built just a few years after the armistice was signed Nov. 11, 1918.

The museum’s job is to continue to inform the public, long after this year’s 100th anniversary of the end of the war has passed, about the atrocities and the benevolence born of the Great War.

“We continue to learn from that because we continue to live in war’s shadow,” Naylor said during an interview with Stars and Stripes on Wednesday. “We aren’t free of conflict, we aren’t in this just and lasting peace. Period.”

Naylor said the words on the Great Frieze remain the driving force for efforts to keep memories of World War I alive:

“These have dared bear the torches of sacrifice and service. Their bodies return to dust but their work liveth evermore. Let us strive on to do all which may achieve and cherish a just and lasting peace among ourselves and with all nations.”