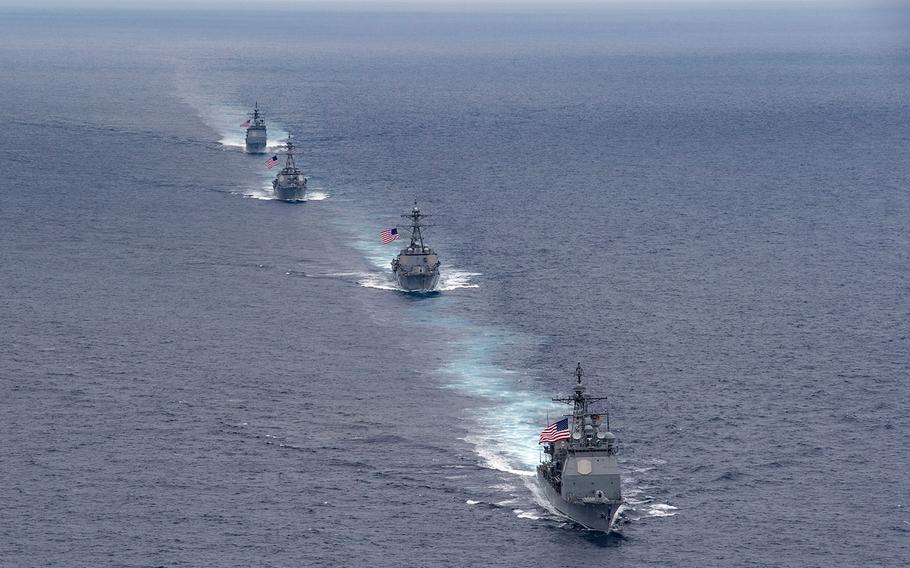 WASHINGTON — Less than a week into his presidency, Donald Trump on Friday signed an executive order promising “to begin a great rebuilding of the armed services of the United States – developing a plan for new planes, new ships, new resources and new tools for our men and women in uniform.”

It was welcome news for the military, but especially for the U.S. Navy. Experts and officials believe that, based on emerging global threats and Trump’s vision, this could be the time for the Navy’s comeback.

“If you consider the Navy is like a corporate entity, it’s the entity that has the right product for the time,” said retired Vice Adm. Peter Daly, chief executive officer of the U.S. Naval Institute. Trump “explicitly or implicitly values many of the qualities that the Navy brings and that puts the Navy in a positive position.”

Trump pledged during the campaign to create a 350-ship Navy – almost matching the service’s own assessment. A year ago, the Chief of Naval Operations tasked Navy staff with assessing what commanders need from their forces. In November, they concluded that today’s 274-ship Navy needs to grow to 355 to meet its mission around the world.

While Trump made clear he has no appetite for a large-scale ground incursion, he wants to make a show of power, Daly said. The Navy, with its freedom on the open seas and its ability to serve as a deterrent – without permission from another nation or the need for an on-the-ground footprint – offers a viable answer to emergent threats.

“Immediately following 9/11, the Army was priority and that was understood,” Daly said. “Now, under projected strategic challenges we have and the current strategy in place ... this could be an important time for the maritime side, with Navy and afloat ships being highly valued.”

Hefty price Any sense of optimism about a boon for the military must be tempered by its price tag, officials warn. The budget is subject to appropriations and approval from Congress, which has been deeply divided over increasing military spending and Trump’s new budget director, Rep. Mick Mulvaney, R-S.C., has made clear that he will only approve military spending that is offset by cuts in other areas.

The Navy has reassessed its priorities, determining that it needs to restore its readiness before it looks to build a bigger, broader fleet.

The high tempo of operations since the Sept. 11, 2001, attacks, combined with the budget wrangling that has deadlocked Washington in recent years, has eroded Navy readiness.

The worn-down fleet is unable to keep up with its deployment and maintenance schedules, sailors have not been able to get enough training to build on their skills, and the service has hobbled from temporary budget to temporary budget without critical, long-term planning – consequences Navy officials warned about years ago and now say have come to fruition.

Vice Chief of Naval Operations Adm. Bill Moran said in a recent speech that the operational tempo hasn’t slowed in the past 10 years, even while ship count dropped from 316 after 9/11 to today’s 274 count, and the fleet has 90,000 fewer sailors. The recent budget shortfalls have forced the Navy to defer maintenance and cut back on steaming and flying hours for training – things that come with a much costlier price tag when delayed, he said.

“All that adds up to higher stress, deferred maintenance and higher cost,” he said. “We’ve got to turn back some of this this op tempo and pay attention to our maintenance.”

For example, he said the Norfolk, Va., amphibious dock landing ship Carter Hall went from a 364-day maintenance cycle to 673 days, with a cost increase from $70 million to $125 million because maintenance on the ship was delayed. Similarly, the San Diego destroyer Russell’s maintenance cycle was supposed to be 92 days. “We’re at 459 and counting,” Moran said, while the price tag for that maintenance climbed by $22 million.

At the same time, the Navy was down to one operable carrier in December and January, leaving a gap in the Middle East while the aircraft carrier George W. Bush sat in Norfolk delayed over maintenance issues.

“Deferred maintenance is insidious,” Moran said. “It takes its toll on long-term readiness of the fleet.”

Readiness decline In January, the Navy drew up a list for the new administration of immediate unfunded priorities for 2017. The list – supplemental to its Unfunded Priorities List of February 2016 -- was obtained by Stars and Stripes after the U.S. Naval Institute reported on its content. It includes some big-ticket items -- 24 new F/A-18 Super Hornets, four to six F-35 C Joint Strike Fighters and an amphibious warship – as well as some weaponry, but focuses mostly on $2 billion needed for shortfalls in ship maintenance and fleet operations.

“The greatest challenges continue to be recovering readiness and restoring aviation and weapons capacity,” the document says.

A few days after the list was submitted on Jan. 5, Moran spoke about the Navy’s priorities at a symposium.

“There is no doubt that ship count is an important metric,” he said. “But I would caution, we can’t get overly excited about the potential for that much money coming our way anytime soon. His priority, he said, is readiness – “to make sure that the 274 that we have were maintained and modernized to provide 274 ships’ worth of combat power. Then we’ll start buying more ships.”

One Navy officer with knowledge of the process, who spoke on condition of anonymity, said when the Navy was asked to supply the list to the transition team, they knew they had one shot to articulate what they absolutely must have to address the increased maritime threat from Russia, China, Iran and North Korea. All in the shadow of the Middle East fight.

“There’s a sense of opportunity,” he said. “There’s this idea based on the analysis we’ve done that we need to grow the Navy to around 355 (ships). But in order to do that, it’s not just a matter of ratcheting up shipbuilding. We have to put the time, effort and money into the ships we have.”

Still, officials are sounding cautiously upbeat. They know they can’t get everything, but maybe they can get more of what they need, said Bryan McGrath, a retired Navy commander with 30 years of experience as a naval strategist and founder of a defense consulting firm, the Ferrybridge Group.

“There’s a sense of guarded optimism,” he said. “Navy leaders recognize there is a political process that has to play out. It’s never a bad thing when the president wants to build a bigger Navy. But they are wisely cautious about filling the holes, building a stronger foundation ...

“And there are holes,” he said. “In readiness, modernization, maintenance. It’s quite a bill. A lot of money is needed to make the enterprise whole again.”

McGrath said the emergence of power struggles from Russia and China – which are seeking to carve the world into regional spheres of influence not seen since the 19th Century – has made the Navy’s job much harder.

It will be up to the Trump administration, he said, to convince Congress that the security and prosperity of the United States lies in its ability to control the seas -- giving the Navy an oversized role in the nation’s well-being.

“That role has been minimized over the past 20 years, but it must once again be focused on as we enter into a new era of great power competition and insecurity,” McGrath said.

“It’s an interesting time. There is a lot of hope and a lot of enthusiasm,” he said. “But the business of governing is different. It’s time to lower the shoulder and get to work.”