Odierno: Days of 'one big fight' are over 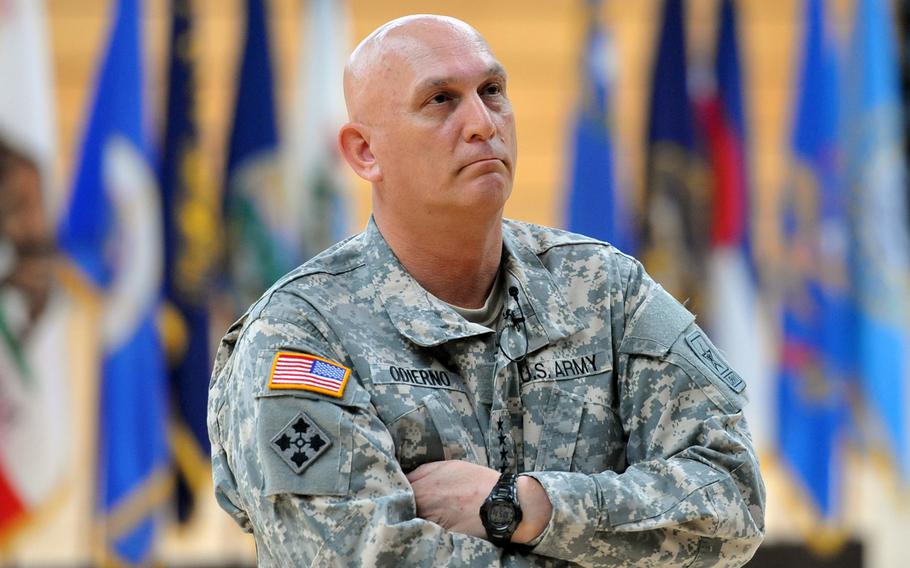 U.S. Army Chief of Staff Gen. Raymond Odierno listens to a question during a town hall meeting at Clay Kaserne in Wiesbaden, Germany, April 30, 2013. In an interview given to a Washington, D.C., newspaper in September, 2014, Odierno said the days in which the Army focused on one big fight are over. (Michael Abrams/Stars and Stripes)

WASHINGTON — Instead of large wars, the Army of the future is likely to focus on deployments of smaller formations of soldiers to hotspots around the globe, Army Chief of Staff Gen. Ray Odierno said in a recent interview.

Speaking Sept. 25 to the Army Times newspaper, Odierno referenced the broad portfolio of current Army operations, which include recent deployments to Iraq and West Africa.

The Defense Department recently announced 1,400 soldiers were headed to Liberia this month to build Ebola treatment centers and provide engineering and logistical support to the fight against the disease, which has killed more than 3,000 people.

“Today we have soldiers deployed on missions in Europe, in Asia, in the Middle East, in Africa, all doing very important missions simultaneously,” Odierno said in the interview. “One of the things that’s changed in the world is the velocity of instability and the necessity to deploy our capabilities simultaneously to several different continents at the same time.”

Defense budget cuts, however, make it harder to fulfill the Army’s responsibility to properly train and equip all the deploying troops, Odierno told the Army Times. A current federal budget deal has given the Pentagon a reprieve from the harshest effects of automatic budget cuts known as sequestration, but the full cuts are set to resume in 2016.

Over a decade, sequestration is expected to reduce planned defense spending by $1 trillion. The Army plans to cut its active duty end strength from a high of nearly 570,000 at the height of the Iraq and Afghanistan wars to 450,000 by 2019. If sequestration is not repealed, however, the Army would likely drop to 420,000 troops.

“What I worry about is the readiness of these forces and our ability to meet these demands if the readiness starts to decrease in ‘16, ‘17, and ‘18,” he told the newspaper. “For me, that’s a grave concern.”

The Army will roll out a new operating concept in coming weeks that formalizes the Army’s mission to conduct an array of smaller, dispersed operations.

“In the past, we maybe focused on one big fight somewhere,” Odierno said at Washington meeting with reporters on Sept. 19. “We believe, with the new Army operating concept, we have to be able to do multiple small-scale things simultaneously. We might have to be able to operate with smaller capability on four different continents at the same time because that’s the way the world is developing.”