Obama: Not enough evidence on chemical weapons use in Syria for US to act 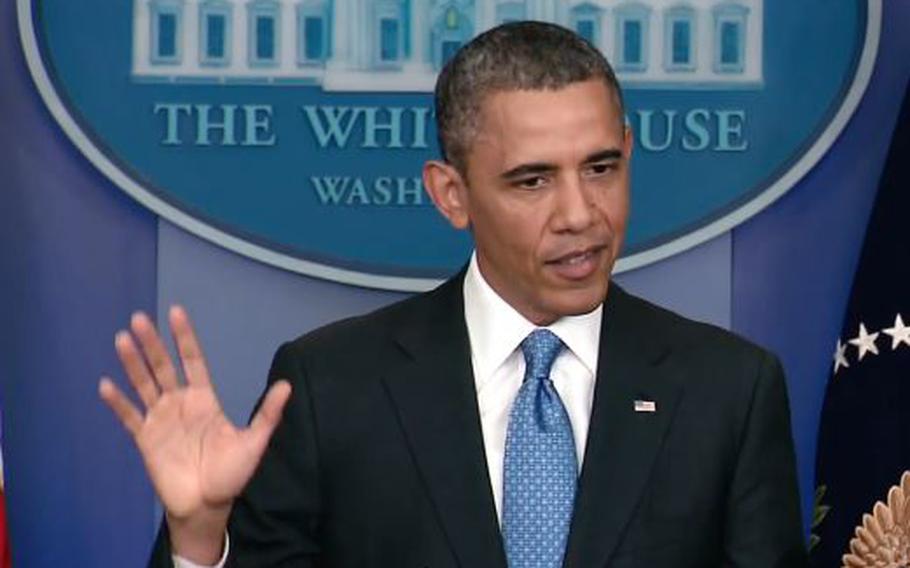 WASHINGTON — President Barack Obama again vowed that the use of chemical weapons by the Syrian regime would be viewed as a “game changer” for international involvement in that civil war, but said officials still don’t have enough details to take action.

The administration has been walking a cautious line since announcing in recent days that the Syrian government appeared to have used chemical weapons, including deadly sarin gas, crossing a “red line” laid down by Obama last year.

On Tuesday, Obama told reporters that too much uncertainty exists to change course in U.S. policy toward the conflict.

“What we have is evidence that chemical weapons have been used inside Syria, but we don’t know how they were used, when they were used, who used them,” he said. “We don’t have a chain of custody that establishes exactly what has happened.”

U.S. officials have said they suspect Syria used chemical weapons twice and support a U.N. investigation at both sites. Syria has held up the investigation, offering access only to a suspected incident believed to have killed 31 people in Khan al-Assal village in March.

At the Pentagon on Monday, Defense Secretary Chuck Hagel said “we are continuing to assess what happened -- when, where… working with our allies and our own intelligence agencies.”

Obama insisted that he has not backed away from vows to stop any regime found using chemical weapons, and said the Pentagon is reviewing military options.

“When you use these kinds of weapons, you have the potential to kill massive amounts of people in the most inhumane ways possible,” he said. “And the proliferation risks are so significant, we don’t want that genie out of the bottle. “

But he did say he didn’t want to rush to judgment, possibly committing U.S. resources to a fight without the backing of the broader international community.

The U.S. is providing non-lethal assistance such as food and medical supplies to moderate Syrian rebel rebel groups. U.S. officials in recent days have said the aid could be expanded to include body armor and defensive equipment.

Congressional supporters of greater U.S. involvement in the war to oust the Syrian dictator have long argued for steps such as establishment of a no-fly zone and arming of moderate rebel factions.

But a number of lawmakers have publicly opposed any deployment of U.S. troops to the region. Sen. John McCain, R-Ariz., one of the leading advocates for U.S. intervention in the conflict, said this week that “the worst thing the United States could do right now is put boots on the ground in Syria.”

In Pew Research Center survey released Monday, the majority surveyed were opposed to U.S. intervention or had no opinion on whether United States should intervene. However, 45 percent of those polled favored military intervention.

Obama said regardless what the chemical weapons investigation finds, the United States is “deeply engaged” in the conflict. He once again said that Syrian President Bashar al-Assad has lost all international credibility and is responsible for countless deaths of his own countrymen.

“The only way to bring stability and peace to Syria is for Assad to step down,” he said.

Outside aid groups estimate that more than 70,000 people have been killed since the fighting in Syria began two years ago.

Analysts who specialize in the Middle East disagreed over Obama’s cautious approach on declaring the red line breached.

A decade after bad intelligence led to the bloody Iraq war, Ratner said, “everyone is concerned that we get the facts right, have a smart strategy and only take steps with broad support among the American public, with our allies and in the region.”

But Elizabeth O’Bagy, senior research analyst at the Institute for the Study of War, said prudent caution has crossed over into a lack of leadership.

For instance, she said, Obama has tacitly allowed weapons to flow to Syrian rebels, but because the United States has declined to become directly involved, too great a portion of the arms are flowing to extremist groups with anti-American ideologies.

An “anti-Bush, anti-Iraq war mindset” based on fear of entanglement in the region is impeding the United States from playing a constructive role in Syria, O’Bagy said.

“The situation has gotten to the point it is no longer feasible for the U.S. to lead from behind, trying to shift events with playing a direct leadership role,” she said.