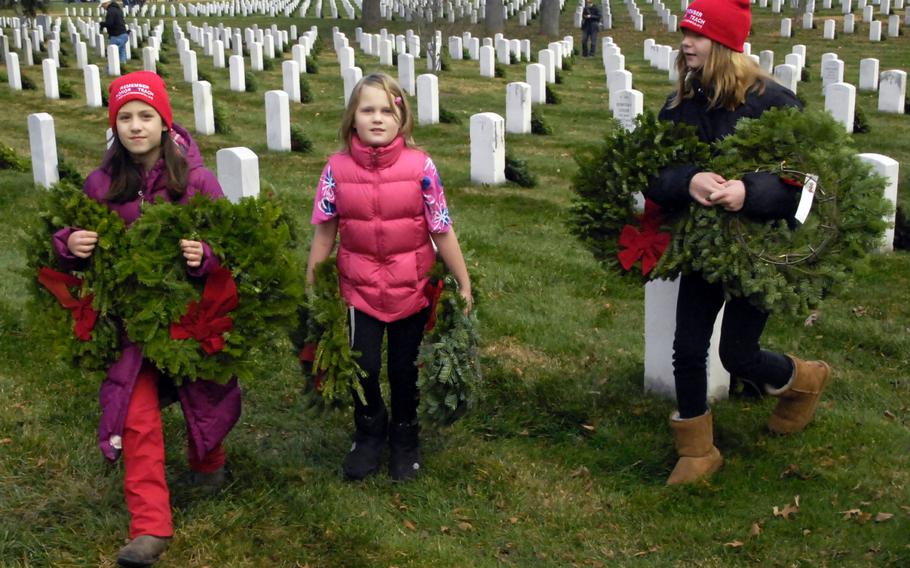 WASHINGTON — A Maine nonprofit that supplies hundreds of thousands of wreaths for cemetery headstones during the holiday season is looking for donations to boost the number of wreaths to be laid this year at Arlington National Cemetery.

“Overall, our numbers are up across America, but at Arlington, the numbers are down considerably,” Worcester said.

Wreaths are designated for specific cemeteries by donors. Last year, donors paid for 119,000 wreaths at Arlington. In the first week of December, that number was about 80,000. The group had been looking to bring at least 130,000 this year, Worcester said, but “it looks like we’re not going to make our goal unless we get some help.”

Since Wednesday, Wreaths Across America has gotten donations for 5,000 more wreaths to go to Arlington, according to Carly Crouse of Kemp Goldberg Partners. She said donations can be made through Dec. 12. Wreaths that are sponsored after a convoy of trucks leaves for Arlington on Saturday will be sent in a separate convoy, she said.

Last year, Wreaths Across America received enough donations to supply 420,000 wreaths for ceremonies held at 825 cemeteries across the United States, Worcester said. This year’s donations will allow the organization to surpass that number. An additional 75 localities have joined the annual event, meaning 900 wreath-laying ceremonies will be held this year.

Karen Worcester and her husband, Morrill Worcester, owner of Worcester Wreath Co. in Harrington, Maine, say they are awed by the ever-increasing scope of the wreath-laying ceremony that began in 1992 as a remedy to a mistake. That year, the company accidentally ordered 5,000 too many wreaths to be made, said Morrill Worcester. Instead of letting them go to waste, they decided to bring them to Arlington, and a tradition was born. For the next 14 years, the family-run business had an extra 5,000 wreaths made to place at Arlington.

“The first 14 years was our personal gift to the military,” said Morrill Worcester. Then in 2005, a photograph showing the wreaths lying against snow-covered gravestones went viral on the Internet.

Soon, the Worcesters were getting thousands of emails from people across the United States wanting to help. In 2007, the Worcesters started their nonprofit, Wreaths Across America, to accommodate the growing interest.

“After the first 14 years, everybody got involved,” Morrill Worcester said. “We never realized how many people feel the same as we do, and there are literally hundreds of thousands.”

Realizing how the national ceremony resonates with so many people, Wreaths Across America’s mission isn’t just about laying wreaths, Karen Worcester said: It is also “to remember the fallen, honor those who serve and, most importantly, teach our kids the cost of freedom.”

A convoy of wreath-bearing trucks is set to depart Maine on Sunday. Wreath-laying ceremonies and educational briefings are planned for each day of the week-long trip that ends at Arlington.

A tentative schedule of the convoy can be found at Wreaths Across America’s website. You can also donate or volunteer to lay wreaths on the site.

Last year, about 15,000 people packed in and around Arlington’s Memorial Amphitheater for the opening remarks before the wreaths were distributed.

Opening remarks for this year’s Arlington event on Dec. 14 begin at 9:30 a.m. at the cemetery’s McClellan Gate.