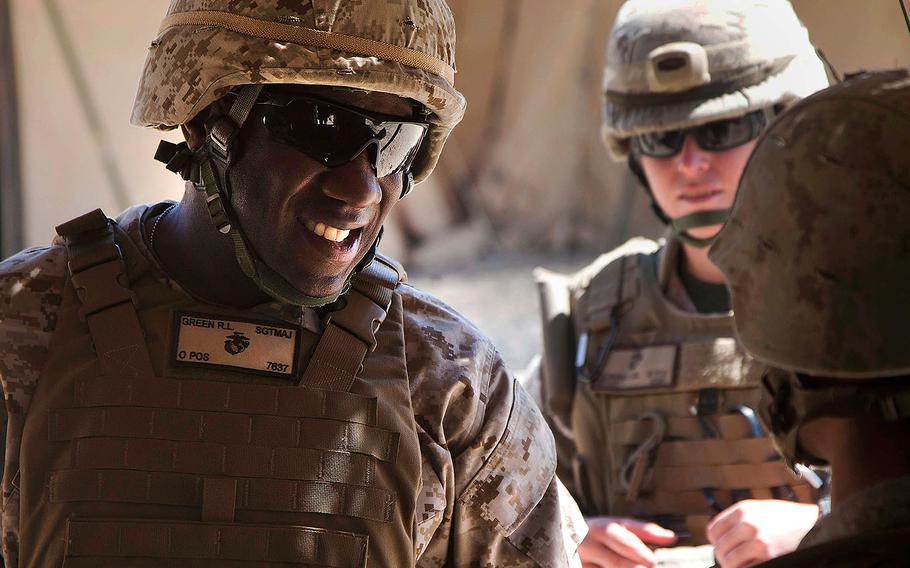 SAN DIEGO — It’s been more than 30 years since Sgt. Maj. Ronald L. Green was a private, but the Marine Corps’ next top enlisted leader said he still tries to see things from the most junior Marines’ point of view every day.

“I’m the type of Marine who looks through the lens of the private. What’s good for the private is good for everyone,” Green said in an interview with Stars and Stripes.

Green, who has served as the sergeant major for I Marine Expeditionary Force at Camp Pendleton since June 22, 2012, on Tuesday was chosen by Commandant Gen. Joseph Dunford as the 18th sergeant major of the Marine Corps. He will assume his duties as Dunford’s senior enlisted advisor Feb. 20 at a ceremony at the Marine Corps War Memorial in Virginia.

The 50-year-old father of three said the challenges that await him and the rest of the Marine Corps in the future are the same challenges they faced yesterday: “There’s an enemy out there, that enemy gets a vote, and our job is to make sure he doesn’t win the election.”

Still, he said, the service must continue to focus on readiness in all areas, including personal and family readiness.

“We pride ourselves on doing better every day,” Green said. “Readiness bleeds throughout. It’s about fighting wars, [and] it’s about being better individuals, better human beings.”

In the past two years, previous commandant Gen. James Amos and the outgoing sergeant major, Sgt. Maj. Micheal Barrett, focused many of their discussions with Marines about ethics, standards and good decision-making skills; Green said he feels certain Dunford also will emphasize ethical and moral character.

The Marine Corps brings in people from across America and all over the country, Green said, and “we hope to return better citizens back to our nation. That’s why we focus on those things.”

Staff Sgt. David Humphries served under Green in 2007, when Green was the sergeant major of Marine Aviation Logistics Squadron 39, at Marine Corps Air Station Miramar, and Humphries was a sergeant. He said Green made a point to talk to all the Marines and “the Marines seemed to soak up his message.”

“He’s very, very good at motivation, at always being positive,” Humphries said, and would always be smiling and joking around.

Green also encourages young leaders to “be engaged and take care of your Marines,” Humphries said.

Staff Sgt. Pablo Rojas Ramirez also served under Green at MALS-39, and said he remembers Green wanted the Marines to know that the Marine Corps is “a lifestyle… something inside, not just a job.”

Rojas Ramirez remembers Green saying, “If you cut me, I bleed little USMCs,” he said.

He also was very enthusiastic and tried to understand the concerns of Marines at every level.

Green, an artilleryman who enlisted in the Marine Corps in 1983, said he wakes up every day and thanks God that he can continue serving. He loves to “lead Marines, and learn from all Marines,” he said. “That’s my biggest joy every day.”

Even though the number of Marines deployed in combat zones is significantly lower now than it was just a few years ago, Green said the Corps must stay vigilant.

Dunford interviewed a handful of candidates for the sergeant major job, and Green said he is humbled and honored to have been chosen. He said he will do all he can to take care of Marines, sailors, soldiers and military families.