New protection against discrimination of gays, lesbians in the military 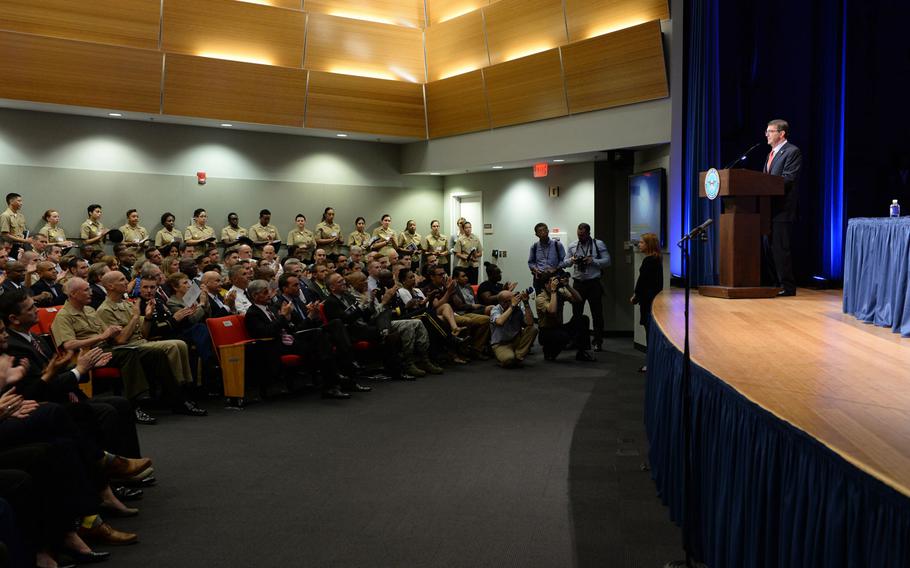 WASHINGTON — Gay and lesbian servicemembers who experience discrimination in the military can now seek recourse after Secretary of Defense Ash Carter announced a change in Pentagon policy Tuesday.

Carter’s delivered the news as part of his remarks celebrating the Department of Defense Lesbian, Gay, Bisexual, Transgender Pride Month.

“Four years after the repeal of ‘don’t ask, don’t tell’ — following years and years of gay and lesbian servicemembers having to hide who they are — today we take pride in how they’re free to serve their country openly,” he said. “Because we believe in getting to a place where no one serves in silence, and where we treat all our soldiers, sailors, airmen, and Marines with the dignity and the respect that they deserve.”

The change adds sexual orientation to the list of non-discrimination categories — including race, religion and age — meaning gay servicemembers who feel they are being discriminated or retaliated against can file an equal opportunity complaint. That protection was afforded to civilian employees of the Department of Defense but even after the repeal of don’t ask, don’t tell four years ago, gay troops were not covered by the Pentagon’s anti-discrimination policy.

The policy does not change the current ban on transgender people serving in the military.

Denny Meyer, a spokesman for American Veterans for Equal Rights, which advocates on behalf of LGBT veterans, applauded the move but said the Pentagon needs to go further and protect transgender servicemembers.

“It’s yet another piece that is being repaired years too late, but it’s about time,” he said. “It’s another step forward — we deserve full and equal rights like everyone else.”

“We must start from a position of inclusivity, not exclusivity,” Carter said. “Anything less is not just plain wrong; it’s bad defense policy, and puts our future strength at risk.”

The new regulations are meant to mirror the department’s existing prohibition on discrimination or retaliation of civilian employees on basis of “race, color, sex (to include sexual harassment, pregnancy, transgender and gender identity), disability, age (40 or older), sexual orientation, national origin, religion or genetic information.” It means, for example, if a superior is working to deny a soldier a promotion based on his sexual orientation, that soldier can now seek relief.

Illustrating the patchwork nature of reforms aimed at welcoming LGBT servicemembers, though, it is unclear whether transgender troops serving despite the ban are now covered by the Pentagon’s anti-discrimination policy.

Asked whether the new policy affected transgender troops, Pentagon spokesman Lt. Cdr. Nathan Christensen referred to the existing policy banning transgender troops from serving and an ongoing review of the military’s policy on who can serve.