New Pentagon policy: Deployable in 12 months or you're out 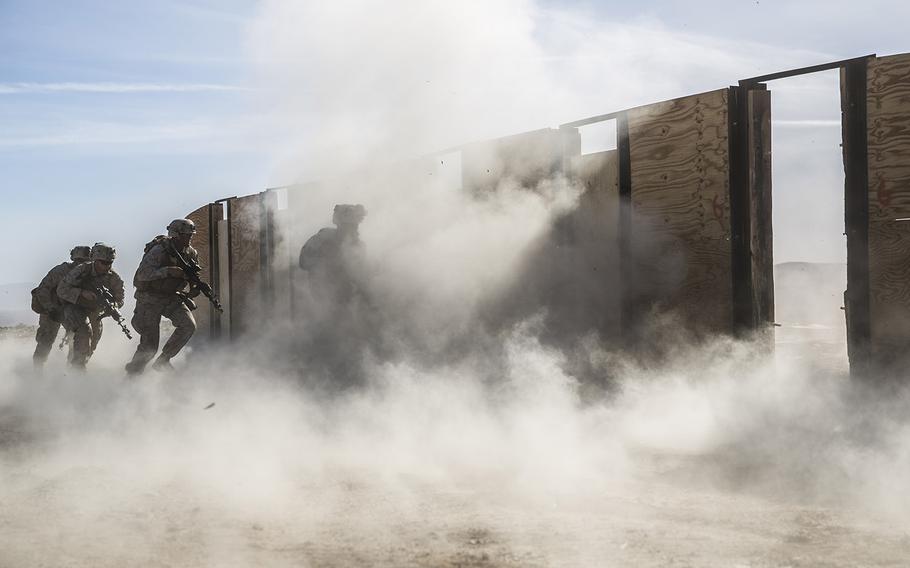 Marines with 3rd Battalion, 7th Marine Regiment, participate in door breaching training a Marine Corps Air Ground Combat Center Twentynine Palms, Calif., Feb. 9, 2018. The Pentagon on Wednesday, Feb. 15, 2018, introduced a new policy that will require servicemembers to be deployable within 12 months or be forced out of the armed services. (Margaret Gale/U.S. Marine Corps)

WASHINGTON — Facing enormous demand around the globe and a slump in military retention, the Pentagon on Wednesday introduced a new policy that will require servicemembers to be deployable within 12 months or be forced out of the armed services.

“On any given day, about 13 to 14 percent of force is medically unable to deploy — that comes out to be around 286,000 servicemembers," Under Secretary of Defense for Personnel and Readiness Robert Wilkie told a Senate panel Wednesday.

“The situation we face today is really unlike anything we have faced — certainly in the post-World War II era,” Wilkie said. “We have to ensure, given the climate this country faces, that everyone who signs up can be deployed anywhere in the world.”

Testifying before the Senate Armed Services Committee’s subcommittee on personnel and family readiness, Wilkie described the policy as an effort to bolster military retention.

He likened the problem to Amazon having 14 percent of its staff out sick on Christmas week. If that were to happen, Amazon would not be “the largest company in the world,” he said.

In July, alarmed at the numbers of servicemembers who were unable to deploy for medical reasons, Defense Secretary Jim Mattis tasked Wilkie with finding the problems and resolving them. It turned out, a large number were unable to deploy for the simple reason of not having gone to the dentist, Wilkie said. That falls on the shoulders of junior officers who are responsible for ensuring their servicemembers are ready to deploy, Wilkie said.

Another issue was recruiting. During years of slow recruiting, the military offered “too many” medical waivers, Wilkie said. Those medical problems follow the servicemembers through their service careers.

Wilkie said the military also needs to get its fitness and training programs up to standards to ensure its forces are healthy.

The new policy will give servicemembers 12 months to be ready for deployment from the time they are called on to deploy or they will be forced out, Wilkie said. There will be exceptions, he said, including pregnancy, postpartem and wounded servicemembers.

Exceptions aside, the policy will be “an across the board standard that will apply to everyone,” he said, emphasizing the enormity of 286,000 nondeployable servicemembers.

“It is a staggering number and in this world, where the forces are at a premium and we are struggling to maintain the ranks, we need to get a grip on this,” he said.